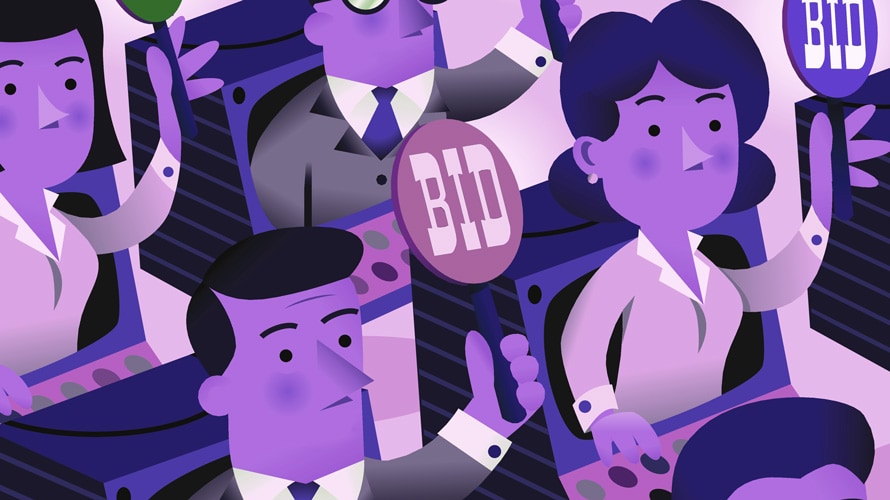 Bid shading has become popular because of the industrywide shift from second-price auctions to first-price auctions. - Credit by Getty Images

As programmatic advertising has increasingly become the norm for brands, both SSPs and DSPs have added more tools for helping marketers price bids. Recently, bid shading has become a popular method for helping marketers save money by setting bid prices in first-price auctions. What bid shading does is use an algorithm to automatically tweak the marketers’ bid price lower based on historical data that considers exchange, the size of the ad and the site that the ad would be featured on, etc.

Unfortunately, bid shading is only a Band-Aid that makes buyers feel better about not addressing the real challenge of developing efficient programmatic bidding strategies.

Bid shading was invented to appease disgruntled marketers. By helping them adjust their bids for each request, bid shading helps mitigate the massive cost increases associated with first-price auctions.

So what’s the problem?

The problem is that bid shading covers up a more systemic issue: Most programmatic algorithms are poorly designed and suboptimal. First-price auctions helped reveal this problem by exacerbating it, but bid shading is not the right solution.

To put this another way, bid shading allows buyers to price only requests that they would already have bid on. Bid shading is looking to find the right price for an impression, not the right impression. So, for brands, using bid shading does not make your ad more likely to reach the target audience, nor does it increase the likelihood of converting a customer. At most, it might help you save money on advertising costs—but if that money is going toward reaching the wrong people anyway, that does not make it much of a comfort.

Another issue with bid shading is that it inherently lacks transparency, which makes it difficult for buyers to know if they are being charged a fair price and leaves them open to fraud and mismanagement. And, as agency Hearts & Science notes, “no single party in the programmatic supply chain sees all bids,” which affects the ability of DSPs and SSPs to set fair prices for impressions.

First-price auctions are soon going to the standard; if this is news to you, then you are in real trouble. For this reason, the industry’s reliance on bid shading is likely only to increase.

This will leave open an opportunity for those willing to invest in algorithms and machine learning. Machine learning (and particularly deep learning) is a necessary tool for effectively bidding in first-price auctions. Artificial intelligence is capable of dynamically bidding differently for each impression depending on its likelihood of influencing behavior and its likely cost. It also has the ability to find potential customers who might previously have been overlooked. Not only does this reduce the amount of money wasted on bids that are too high, but it also ensures that brands are spending their money in the right places.

But the greatest benefit of using AI, apart from the opportunity to save money, is the ability to penetrate the inner workings of DSPs and SSPs and give buyers what is best for them, as opposed to the platform they are using.

So what are some alternatives?

Knowledge is power. First understand from your buy-side vendor what methodologies they are using for their bid shading solution. Are they saving you money only on impressions you ordinarily would have bid on? Has it increased or decreased your win rate? How much are they saving you? Do they plan on developing and integrating different machine learning models designed for first-price auction mechanics? Are they helping you choose the right impressions?

If you think your buy-side vendor is not efficiently finding you the right impression (not just the right price), you might want to explore supplementary partners who can push scored audiences to your DSP of choice. Such partners use the latest in AI to ingest your seed audience and use this as a basis to score the rest of the online universe on their propensity to convert. This allows you to adjust your bidding strategy for users who are highly likely to convert versus the ones less likely to convert, mitigating the risk of paying too much in a first-price auction.

The most powerful and comprehensive option for the more sophisticated buyers with the resources of a data-science team is to look for platforms which are designed with Bring Your Own Algorithm in mind. This allows you to build algorithms customized to your brand and KPI using your own first-party data. Once you know which impression is the right one, you should also be able to dynamically price it correctly.

For now, it looks as if bid shading is set to stick around for a while, but that does not mean that brands should just stick with the status quo. Rather, they need to be aware of what bid shading is and what the alternatives are.

The point of bid shading is to cut the cost of impressions—but if that comes at the expense of finding the right customer, then that price is too high to pay.

Jeremy Fain is the CEO and co-founder of Cognitiv.