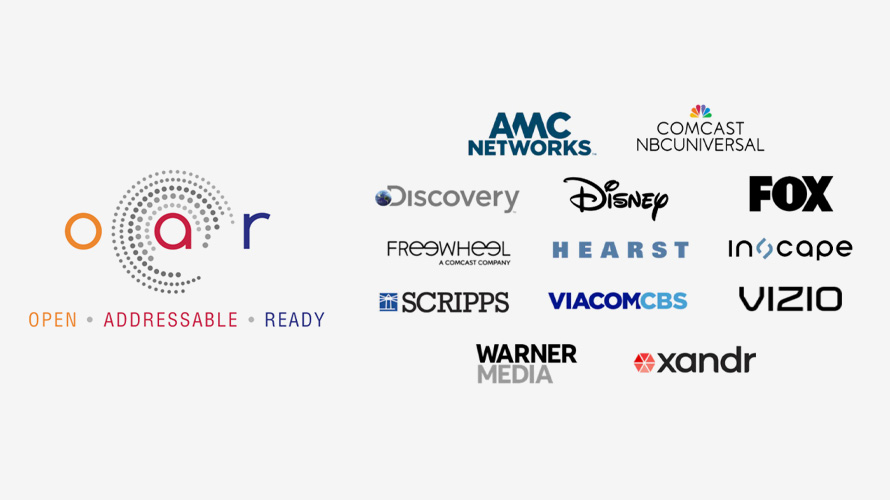 Project OAR will be rolling out its tests in phases. - Credit by OAR

Fox, ViacomCBS, NBCUniversal, E.W. Scripps and AMC Networks will begin their tests on June 24, while Disney Media Networks, Discovery Networks, Hearst and WarnerMedia will start their trials in mid-August.

Since its formation in March 2019, Project OAR (Open Addressable Ready) has been bringing together programmers, agencies and ad-tech companies to build and standardize a solution that allows networks to sell addressable TV inventory across smart TVs.

“We view the bulk of this year as a proof of concept opportunity, and a trial opportunity, with everybody really jumping in feet-first in early 2021,” said Jodie McAfee, svp of sales and marketing at Inscape, the Vizio-owned data company leading Project OAR.

The tests will start running across a small number of Vizio’s footprint of 10 million opted-in smart TVs, but McAfee said the technology should be available on all TVs by October.

“This is an important milestone for WarnerMedia and the OAR consortium members as we work toward establishing cross-industry standards,” David Porter, vp of ad innovation and programmatic at WarnerMedia Ad Sales, said in a statement. “The insights from these trials will lay the groundwork to achieve the critical scale necessary for addressable advertising.”

McAfee said the networks control how they sell their inventory. Project OAR simply gets paid a fee every time it replaces an ad.

“Our role in this is as an enabler. How each of the members chooses to present this to their customer, we’re leaving it up to them,” said McAfee.

Addressable advertising is the ability serve to targeted TV ads to specific households. For example, an auto advertiser may run a sedan ad nationally, but as part of that buy, it can swap in a truck ad when targeting a household that fits a specific audience.

Through Project OAR’s technology, a media owner watermarks its inventory, and when an addressable ad is ready to run, a Vizio TV reads that watermark and swaps in the targeted ad in real time.

Addressable advertising on linear TV has traditionally been limited to the 2 minutes of inventory that multichannel video programming distributors (MVPDs) hold every hour. Now, that capability is coming to networks, which control the other roughly 14 minutes of ad time, as consumption habits change and cable subscriber losses mount.

AMC Networks recently became the first programmer to join On Addressability, an initiative spanning the footprints of Comcast, Cox and Spectrum.

Nielsen, like Project OAR, is also testing technology for addressability on smart TVs, namely LG sets. It recently added Univision and Disney’s networks to the mix, bringing the total number of participating programmers to 10.

Nielsen’s trials began in January and were slated to run through the first half of the year, but the test will now last until the end of 2020 due to the impact of the coronavirus pandemic, said Kelly Abcarian, general manager of advanced advertising at Nielsen.

McAfee said he doesn’t view Nielsen’s technology as competitive but as complementary, since it means advertisers have more opportunities to run addressable campaigns.

“At the end of the day, we just want to monetize the Vizio glass. So, if there’s more addressable glass around it, that’s great, because what everybody really wants is scale,” McAfee said.