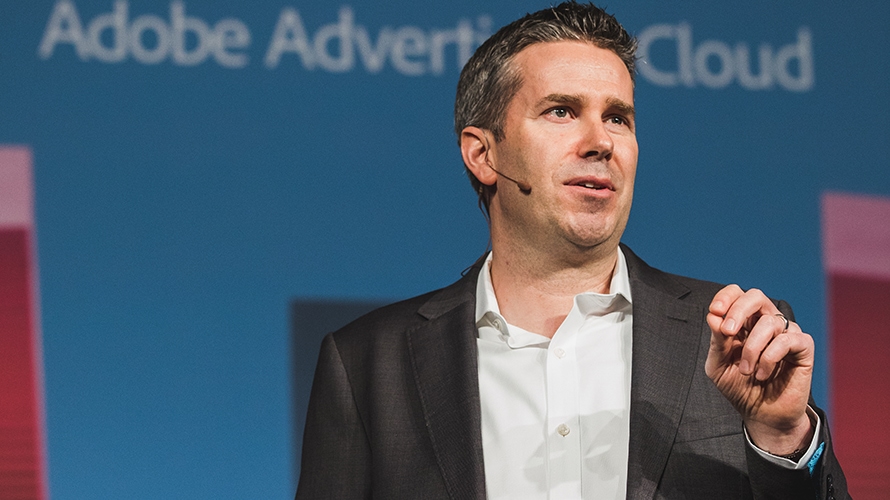 Earlier this week at the Adobe Summit in Las Vegas, the company’s key players assembled to outline updates to its platform and address client concerns in the contemporary marketing environment.

Adweek caught up with Keith Eadie, svp and general manager of Adobe Advertising Cloud, to talk about the intricacies of data-led targeting in an era of heightened awareness over data privacy.

Adweek: How are marketers able to improve personalization as controls around the availability of data begin to tighten?
Keith Eadie: The entire world is transitioning away from third-party data, which has had sparse success depending on the campaign objective, to a world that is far more first-party data-driven [and] has to be under the umbrella of user consent, trust, transparency, etc.

The largest brands in the world are blazing a new path on how they manage user consent and how they build their customer profiles in a way that is aligned with what their consumers think should be the right experience around the ownership of their data. Some advertisers may have used third-party data in which they didn’t have any type of consent whatsoever attached to it, but now they’re starting to find that using more first-party data in advertising actually gets better media outcomes.

What efforts do you think the U.S. can learn from the rollout of GDPR in Europe, as similar legislation is drawn on the other side of the Atlantic?
There are material lobbying efforts in Washington [D.C.] by different players around driving lawmakers to set federal privacy agenda as opposed to having multiple states write up [different rules] that would mean fragmented privacy regulations. I think there’s a couple of elements that would make the deployment of a U.S. privacy law a bit smoother than what GDPR came to be. I would start with much more engagement from the infrastructure players in digital advertising to see how it could be deployed and architected.

Part of the GDPR challenge was for the industry to implement and ensure who is properly adhering to it because a lot of it was written by regulators without a lot of consultation. If you look at the IAB and its efforts to deliver a GDPR privacy consent framework, [which still has yet to fully win over Google], I think that was the industry reacting to the fact that the law that was designed really didn’t take into account whether it was implementable in the current technology architecture.

The hope I have for both regulators and industry is that they can collaborate so that we get a law that’s actually buildable.

One of the big issues to have affected behavioral advertising in the last 18 months is Apple’s rollout of intelligent tracking prevention in the Safari web browser. How have you been working with the industry to help assuage pain points this has raised?
We’ve been dealing with the ITP implementation for search and display for a year. We have solutions for brands by using analytics alongside the ad cloud to track conversions as opposed to third-party cookies. Ad Cloud’s unique integration allows us to leverage that capability when it comes to conversion attribution. We can do this based on analytics understanding of user identity paired with Ad Cloud’s knowledge of media exposure.

The IAB Tech Lab now has a working group that aims to address user privacy at the browser level in a way that would minimize the impact that could have on third-party ad targeting. How do you think any such proposal might work?
One of the things that the industry is discussing is essentially an advertiser ID that’s tied to the browser, not unlike a mobile device ID. It could be opt-out or opt-in. The parameters around that advertising ID could be clearly defined to the consumer with various sorts of permissions or controls, that way you could have a persistent ID that’s defined by the three browser owners that play the same role and functionality as a device ID.

I think that a lot of the concerns are around having the foundation of the internet economy essentially by three to five players [i.e., the major browser providers such as Google, Apple and Mozilla] and whether or not these IDs will synchronize with each other. Some of the thinking is to agree as an industry to have the browsers define an advertising ID (in a semi-regulated way), define parameters around it, find privacy compliance around that and then go forward from there.

Adobe Summit is typically where the company makes announcements over its Experience Cloud. What kind of further announcements can we expect from Advertising Cloud for the duration of 2019?
You can expect to see us build out access to new and unique access to premium video publisher inventory [building on the earlier relationship with Roku]. I think there are many opportunities to enable first-party data in other premium video environments. And we’ll continue to push into new channels. We launched programmatic audio in the last couple of months and so there’s a couple of more channels that we’re interested in adding to the platform’s repertoire.