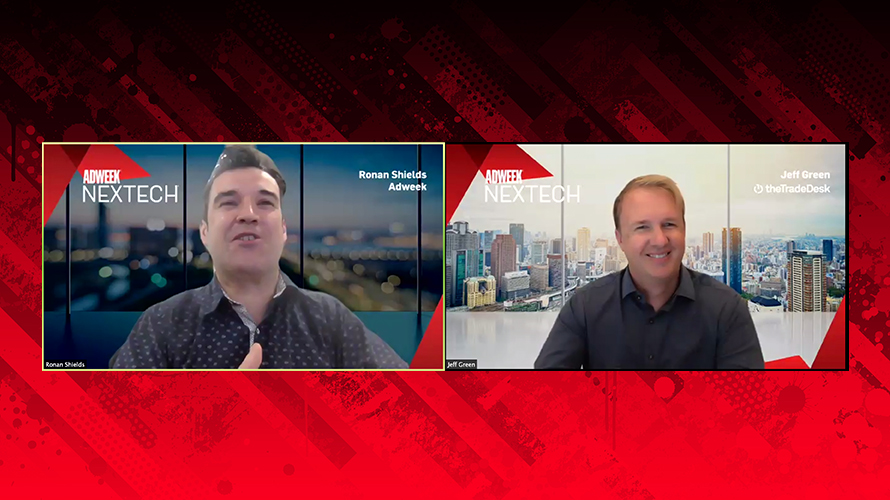 The Trade Desk has big ambitions. It’s building a business in China, it wants to rule in connected TV and it’s developing a replacement for the third-party cookie.

Jeff Green, CEO of The Trade Desk, joined Adweek’s NexTech 2020 Virtual Summit to explain the company’s ambitions in CTV and what’s next for its identity solution, Unified ID.

Global advertising is a $691 billion industry, and it’s expected to climb to $865 billion by 2024, according to eMarketer.

Green said he expects about half of that spend will be in premium video, with connected TV leading the way.

Given the rise of CTV, which has accelerated during the coronavirus pandemic, Green said that it’s very likely CTV will represent half of The Trade Desk’s revenue in five years.

“It very well may be more than half … and it will continue to be our core competency as far as I can see into the future,” said Green.

The Trade Desk had projected 2020 revenue of at least $863 million, but the company pulled its revenue guidance earlier this year due to the financial impact of the novel coronavirus.

It isn’t looking to disintermediate

The Trade Desk, ad tech’s largest independent demand-side platform, already works closely with a number of major CTV players, such as Hulu and NBC, that have essentially in-housed or acquired companies that assist with yield management.

The digital advertising supply chain on desktop and mobile is already contracting as brands look to get closer to publishers and vendors see their tech become commoditized. But Green said he has no interest in cutting out supply-side platforms as the company makes its way into CTV.

Editor: Josh Rios
Staying on the demand side will also help The Trade Desk compete against walled gardens.

“Of course, we’re supplying the highest bid we can to the publishers, but we’re always doing that as an advocate for the buy-side. And we think that as soon as we get into yield management, we betray that objectivity that really sets us apart from companies like Google or Facebook,” he continued.

Earlier in the week, Adweek reported on The Trade Desk’s efforts to build out the second iteration of its Unified ID solution. Version 2.0 will be an open-source, single sign-on for the open web that will initially use email addresses instead of third-party cookies to create encrypted IDs that are passed along the bidstream.

Part of what Green wants to do with Unified ID 2.0 is to better explain the “quid pro quo” of the internet, where a user provides their data in exchange for relevant ads, which fund many websites and apps.

Apple’s pending iOS 14 update will require app developers to get consent from users in order for third-parties to access that data. Given these privacy changes, The Trade Desk will have to make sure its identity solution fits into Apple’s guidelines.

Green said Unified ID 2.0 will create a framework to let users control how their data is shared.

“It’s really important that we create a framework so that we can adjust that, so that Apple can inform us about what the consumer has said, he said. “It can [also] initiate a dialogue, when [users] go to an app or a site, that the quid pro quo was broken so that you can prompt the user to give them an opt-in.”