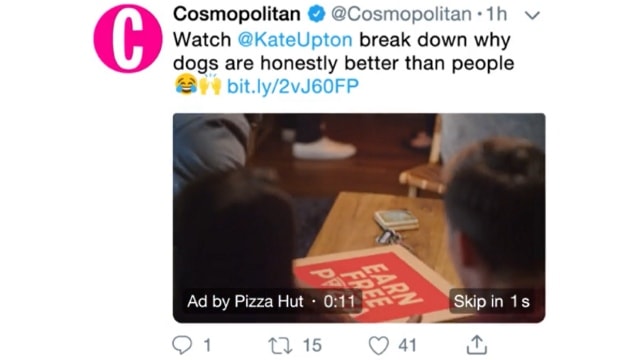 Twitter announced Monday that its in-stream video ads are now available to publishers’ audiences worldwide, rather than being limited to their home markets.

In-stream video ads debuted in the U.S. in April 2017, enabling publishers to monetize their organic video content, and they have been expanded to nearly 20 other markets over the past year including Australia, Brazil and Spain.

Vice president of publisher products Mike Park said publishers’ earnings from in-stream video ads more than doubled in the first half of the year compared with the first six months of 2017, adding that up to 60 percent of the audiences for many publishers originate from global markets.

Park added that Twitter heard feedback from many publishers that they wanted the opportunity to monetize their organic video content outside of their home markets.

BuzzFeed senior vice president of branded content distribution and ad operations Ken Blom said, “We typically see our content travel beyond the local handle it was created in and extend to many other markets. Often times, the most viral content reaches global audiences, and this update helps advertisers align with that content.”

Twitter said publishers that are interested in taking advantage of this update should reach out to their partner managers.

Didac Lee, board member, digital for soccer powerhouse FC Barcelona, said, “Apart from monetizing our content, it’s enabling us to reach new audiences that aren’t connected with our club. It is also very significant that the monetized videos have a completion rate beyond the organic average.”