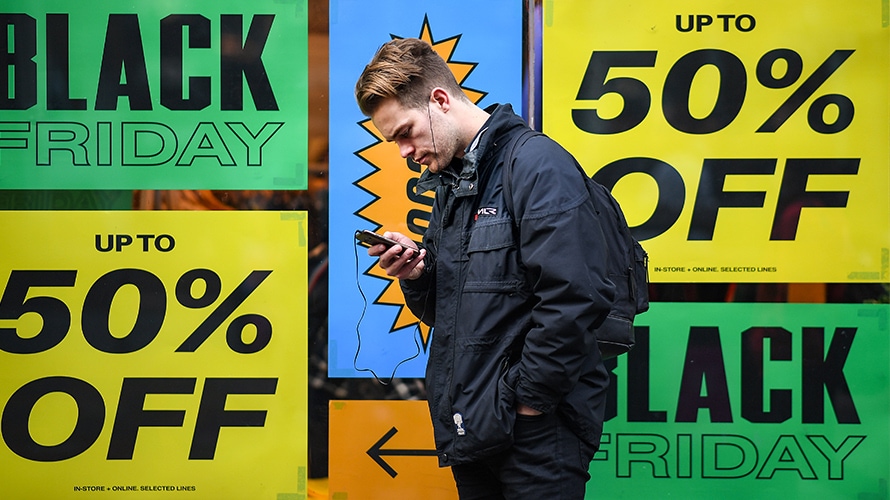 Shoppers and sales were down for Cyber Week this year, but the NRF remains positive about holiday shopping overall. - Credit by Getty Images

Fewer U.S. consumers shopped for gifts and holiday items during Cyber Week this year, but trade association the National Retail Federation (NRF) is optimistic that 2018 will still prove to be a good year for U.S. retail.

During a conference call, Bill Thorn, senior vice president of communications and public affairs at the NRF, said the firm is “very bullish total retail spending this year will be up between 4.3 and 4.8 percent” in part because there are 32 days between Thanksgiving and Christmas—including five weekends. He also pointed to the strength of the economy this year, adding that consumers are more likely to take advantage of deals when they are struggling financially. (It’s perhaps worth noting there were 31 days between Thanksgiving and Christmas last year, so it’s just one extra day.)

Here are 10 additional takeaways about consumer behavior from the NRF and research firm Prosper Insights and Analytics:

The NRF found more than 89 million consumers shopped both online and in stores—including mobile and click-and-collect orders—which was up nearly 40 percent from the year prior. What’s more, these particular shoppers spent an average of $93 more than the shoppers who stuck to a single channel.

“This year’s research clearly shows that the investments made by retailers are paying off in a big way. Over the last couple of days, what I heard in discussions with retail CEOs across all categories and segments was very positive, driven by macro conditions of low unemployment and rising wages combined with the right mix of merchandise at great prices,” said NRF president and CEO Matthew Shay in a statement. “This is a very strong emotional start to the holiday season and a positive indicator of where we are headed over the next month.”

4. They Shopped on Marquee Dates

5. They Still Have Shopping to Do

Or, as Mark Mathews, vice president of research development and industry analysis at the NRF, put it, “There’s lots of dry powder out there for people to shop as the season progresses.”

6. They’re Spending on Themselves

U.S. consumers still have shopping to do because many took advantage of Cyber Week promotions to buy for themselves—self-gifting was up 13 percent this year—which, noted Phil Rist, executive vice president of strategy at research firm Prosper, leaves gifts to buy for others.

Consumers 18 to 24 spent the most on themselves with an average of $149, which Thorn said means they have “redefined Black Friday as Me Friday.”

7. They Want Products to Be In Stock

According to Mathews, a key for retailers will be keeping a watchful eye on inventory for the rest of the season.

“I think situations where you get in trouble is if you don’t get inventory right,” he said. “If a customer goes in to a store and a product isn’t on the shelf, then the mobile phone does come out.”

8. They Expect Deals To Keep Coming

Most consumers think Cyber Week deals will continue or improve as the season progresses.

“The smart consumer is the post-recession consumer,” Thorn added.

The NRF said the holiday season has ballooned to two months, starting after Halloween.

“I think at the end of the day, what we’re seeing is Black Friday remains a traditional, if not an emotional, start to the holiday season,” Thorn added.