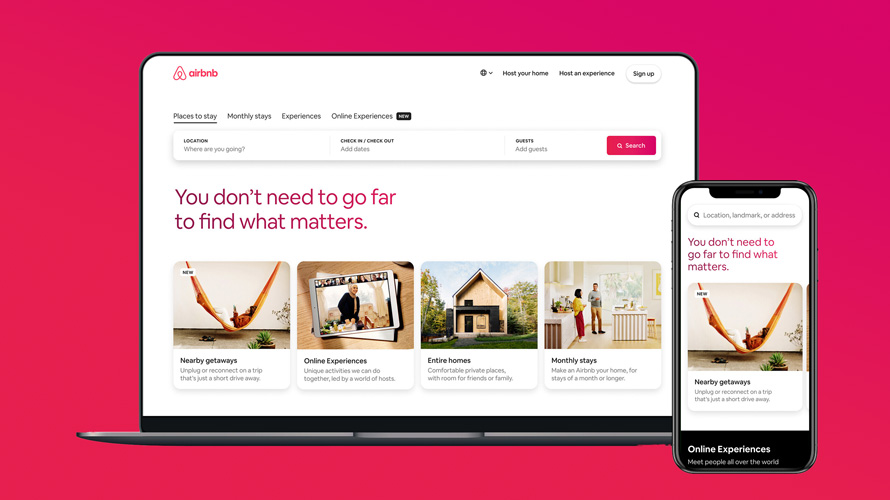 The home-sharing site is partnering with local tourism groups and the National Park Foundation to promote small businesses and lesser-known attractions. - Credit by Airbnb

In an effort to cater to the interests of travelers just beginning to crawl out of lockdown, Airbnb has made changes to its homepage and app in an effort to get people out in their own metaphorical backyards.

The campaign, “Go Near,” was one of several announcements made this morning as the home-sharing platform said recovery for the industry was near, according to its own booking data.

Airbnb is not alone in its optimism. Airlines and hotel brands have all noted increases in bookings and occupancy levels, although they’re still nowhere near where they were before Covid-19.

However, most executives, including Delta’s Ed Bastian and Hilton’s Christopher Nassetta, predict the travel industry won’t completely recover until 2023.

That timeline might be more difficult for Airbnb to stomach, as it had been planning on going public this year before the pandemic hit, although CEO Brian Chesky told Bloomberg that he wasn’t ruling out going ahead with the IPO.

Details about the campaign are still vague—Airbnb said that “Go Near” would appear on its own homepage and app and would be followed up with a social media and email campaign to promote domestic travel and the platform’s own online experiences. But it was partially inspired by a survey commissioned by the brand that showed that nearly half of its U.S. respondents said they’d prefer to stay within a day’s drive for their first trip after lockdown restrictions lift.

Airbnb, which declined an interview for this story, also said it had seen bookings grow between the end of May and the beginning of June year-over-year, but did not provide specific numbers.

During the same period, from May 17 to June 6, nights booked for a family—bookings including at least one child or infant—were up 55% year-over-year. Superhosts, who have a brand-verified level of quality, stand to gain, as 55% of nights booked during that period were with a superhost, a 10% increase compared to last year.

Domestic spots were among the top trending destinations, which include Big Bear Lake, Calif., Miramar Beach and Panama City Beach, Fla., and the Great Smoky Mountains.

Since the outbreak of Covid-19, Airbnb has announced several initiatives such as the online experiences platform to keep travelers interested. Like its closest competitors, the brand announced that it was rolling out a cleaning certification program for its hosts. It also instituted a 24-hour wait period between guests.

Chesky had planned to deliver a video message last week on the company’s vision for what it’s calling the “new world of travel,” but canceled in light of the ongoing protests against police brutality following the police-involved killing of George Floyd. In today’s announcement, Airbnb did not mention its previously announced focus on long-term stays of 28 days or more.

Airbnb also announced several partnerships with international and domestic destination marketing organizations including Visit Florida, Discover Puerto Rico and the Bermuda Tourism Authority to use Airbnb’s platform as a tool, including sharing the brand’s own internal data and insights.

The brand is also partnering with the National Park Foundation on a nationwide unpaid marketing campaign to connect travelers with lesser-known parks near their destinations. That campaign is slated to launch later this summer.

“We want to work with governments and tourism agencies to help restore travel in a responsible way that benefits local citizens and small businesses economically, and allowing these organizations to leverage our platforms and channels—and reach hundreds of millions of people globally—is one of the tools that we are offering as part of that program,” said an Airbnb spokesperson.

Airbnb wasn’t alone in sharing some internal insights this week as the travel recommendation and booking site Tripadvisor released its own findings from a monthslong study examining traveler sentiment during the pandemic.

Tripadvisor’s results mirrored Airbnb’s, showing that consumers are most comfortable traveling closer to home and to rural and beach destinations. A vast majority (86%) said cleanliness will remain very important when selecting accommodations after Covid-19.