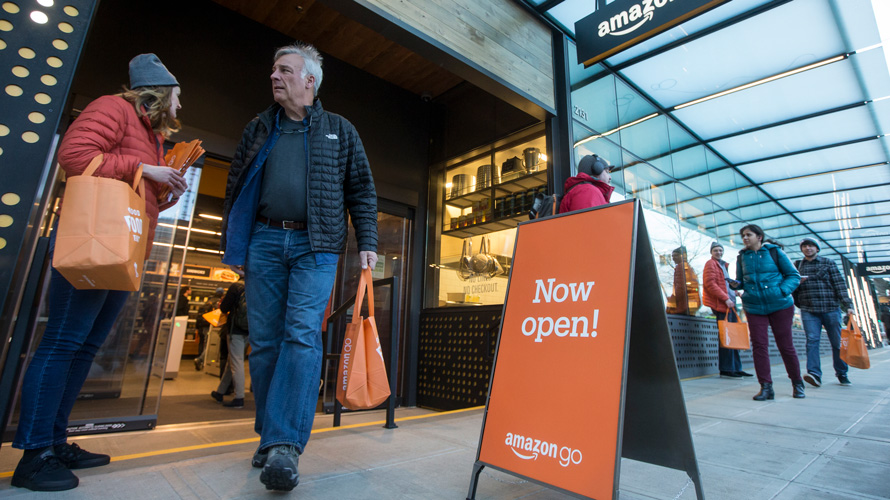 Amazon is pitching its cashierless technology to other retailers. - Credit by Getty Images

Amazon has started pitching what it’s calling Just Walk Out technology that powers Amazon Go stores to other retailers and, per a spokesperson, has “several signed deals” already.

The premise of “fast and convenient checkout experiences” remains the same. However, instead of using an app to enter as customers do at Amazon Go, shoppers at other stores will use credit cards.

Amazon says it provides “all the necessary technologies to enable checkout-free shopping,” but it’s not clear what those technologies are exactly beyond some combination of computer vision, sensor fusion and deep learning.

According to Amazon’s website for the service, JustWalkOut.com, installation “can take as little as a few weeks;” the platform also offers to “work with retailers as part of your construction or remodel plans” for new locations.

Like Amazon Go, Just Walk Out technology detects the products shoppers take and return to/from shelves, and tracks them in a virtual cart. When a shopper leaves, the credit card they used to enter is charged. Customers who want receipts can visit in-store kiosks.

The retailers will handle customer service, including returns.

Amazon says “many retailers” have expressed interest in checkout-free shopping since Amazon Go debuted in 2018. Amazon is “excited” to offer the technology to other retailers to “delight” more customers.

But it also raises a question about shopper data—and whether Amazon stands to benefit from even more consumer insights.

On the website, Amazon notes it “only [collects] the data needed to provide shoppers with an accurate receipt,” and shoppers can think of the data collection as “similar to typical security camera footage.”

When asked if Amazon will retain shopper data from other retailers for its own use, the spokesperson said Amazon prohibits the use of the technology “for anything other than supporting Just Walk Out retailers.”

Jay Stanley, senior policy analyst for the ACLU, which has previously expressed concerns about Amazon technology like Rekognition, said the ecommerce giant’s ability to retain data in cashierless implementations depends on the contractual and technological arrangements it makes with clients. “I don’t know that those contracts … ever will be public,” he added.

Joey Camire, principal at consultancy Sylvain Labs, however, said, “Unless they are making explicit that they won’t be analyzing it for their own purposes, which would likely be in the deep terms and conditions, it’s safe to assume that they are absolutely tracking that data.”

That includes the ability to geographically track product affinity and purchasing patterns beyond Amazon retail and, if nothing else, “continues the agglomeration of data, and retail data supremacy in the market for Amazon,” Camire added.

On the other hand, Brendan Witcher, an analyst at research firm Forrester, said if Amazon is selling cashierless implementations like a technology vendor, it would not have access to that data—but that would run counter to every Amazon initiative to date, including Echo devices.

“Amazon doesn’t make any money when I ask, ‘What’s the weather?'” Witcher said. “Amazon wants you to say the word ‘Amazon’ every day of your life. That’s their new mission statement.”

And so, he said, the lesson for retailers is to read the fine print about what Amazon is potentially collecting and/or retaining.

The development may also be bad news for startups in cashierless retail, including Trigo Vision, which is working with Israeli grocer Shufersal and raised $22 million in September 2019 to expand in the U.S. and Europe, and Zippin, which operates a small concept store in San Francisco and a checkout-free convenience store at the Golden 1 Center in Sacramento, Calif., which is open during NBA games and concerts.

“Our customer base has been steadily growing around the globe and [we] expect the Amazon news to accelerate that growth,” Motukuri said. “Most retailers would not want to hand their business and data over to a competitor, but this move by Amazon should create a strong sense of urgency. With our full-featured, turnkey offering, Zippin can help retailers move to the checkout-free world quickly, on their own terms.”

Witcher agreed the news will trigger more retailers to look at the technology, but they may be reluctant to partner with a rival like Amazon.

“This is one of the reasons the Buy button … they were offering retailers to put on their checkout pages didn’t take—because retailers didn’t want to put the name Amazon on their checkout pages,” Witcher said. “Retailers need to weigh heavily if they want to get in bed with Amazon on another part of their businesses. Many of them will be hesitant. … There’s a lot of retailers out there who don’t want Amazon to know more about them than [is necessary].”