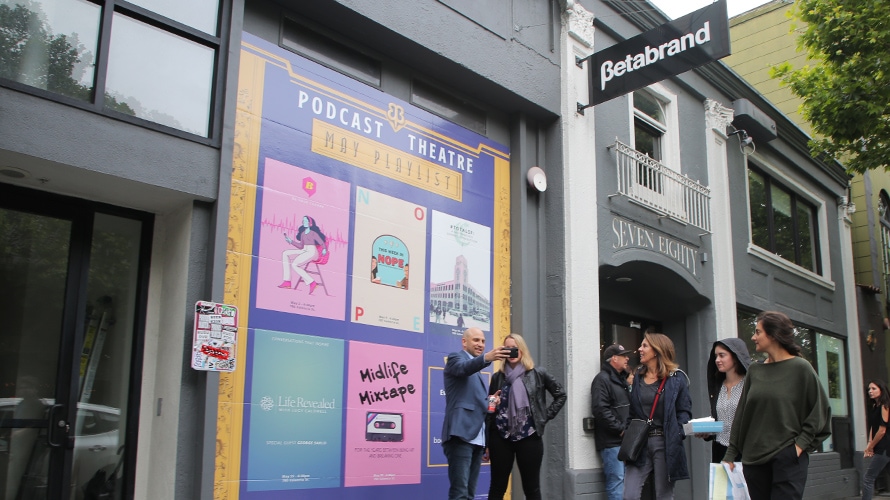 Every Thursday, a podcast comes into the store to record in front of a live audience. - Credit by Betabrand

Plenty of brands, from digitally native ones to legacy retailers, are toying with some kind of physical footprint. There’s the upstart “leisurée” digital retailer Lively and furniture company Burrow, each inviting customers into their stores to attend events like workshops or movie screenings. Then there’s the granddaddy of retail, Macy’s, which uses its stores to test a variety of different pop-up concepts, like Story, b8ta and The Market @ Macy’s.

And then there’s Betabrand.

The 9-year-old crowdfunded ecommerce company is taking a different tack: bringing small- to medium-sized podcasts to its San Francisco store every Thursday and inviting around 100 guests to listen in (and perhaps end up learning a bit more about Betabrand in the process). In a nod to the early days of radio, the brand is calling this experiential piece of marketing “Podcast Theatre.”

“We have this amazing location that’s unoccupied at this time of night,” said Chris Lindland, founder and CEO of Betabrand. “It’s a new way of looking at physical retail spaces and connecting with digital audiences.”

Eugenia Chien and Tara Ramroop, co-hosts of Muni Diaries, a podcast centered around riding the Muni and BART, two public transit systems in San Francisco, said they appreciated that Betabrand set everything up for them and gave them “creative reign,” as opposed to dictating anything or leaving it up to them to figure out event logistics. 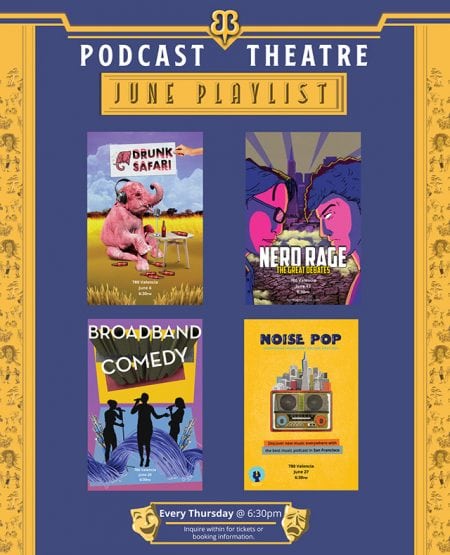 Chien said, anecdotally, that after performing at Betabrand’s Podcast Theatre, they saw more new guests at their twice-annual live show the following month. The two co-hosts also believe Betabrand’s advertising helped as well; the company displays the podcast lineup on its garage next to the store.

“Being involved in the Betabrand Podcast Theatre helped us reach a new audience, whether it’s the audience from Betabrand’s own following or people in the neighborhood walking by,” Chien said. “Those were two audiences that we didn’t have access to before.”

For now, there’s no formal partnership or exchange of goods between Betabrand and the podcasters that come through and perform. Lindland said the project is still in an “experimental phase” where the company can assess whether to do this more than once a week, or even bringing the concept to other spaces.

"They’re a supporter of creators, and we love that."

Experimenting with such a concept isn’t totally out of character for Betabrand. In 2013, the company built a crowdfunding platform in which people decided what clothes get made. For example, past winners include a poo emoji dress shirt and dress-style yoga pants.

Betabrand opened up its brick-and-mortar store in 2013 and has since hosted a variety of quirky window displays. According to Lindland, the brand’s always seen the storefront as an “experimental media center.” Since putting out the call for podcasters to come perform in the shop, Lindland said Betabrand ended up with three months of shows programmed in three days. The company’s booked through summer.

And while there’s no formal quid-pro-quo, Lindland said podcasts are talking up Betabrand and vice versa.

Rachel Dodes, a co-host of the podcast This Week in Nope, added that after they did the show at the Podcast Theatre they saw an 18% increase in downloads.

“Betabrand is a champion of independent product and apparel designers, so here they are supporting independent podcasters and entertaining the neighborhood they’re based in in the process,” Dodes said. “They’re a supporter of creators, and we love that.”