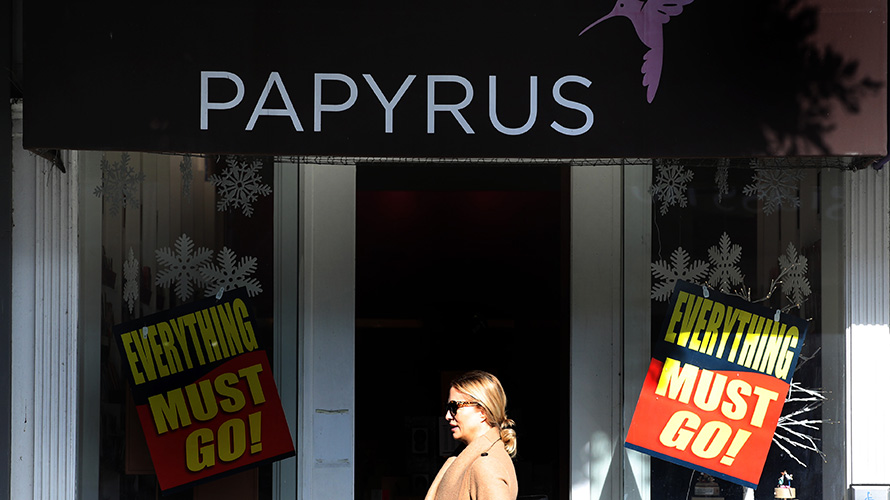 Papyrus is one of a handful of retailers that have either filed for bankruptcy or restructured in January. - Credit by Getty Images

This week, Fairway Market and Papyrus joined Save-A-Lot parent Moran Foods as retailers that have either filed for bankruptcy or defaulted in January, making for an inauspicious start to 2020.

On Thursday, Fairway Market filed for a voluntary Chapter 11 bankruptcy to complete a strategic sale process, and has entered into a stalking horse asset purchase agreement with Village Super Market. Papyrus parent company Schurman Fine Papers also filed for bankruptcy and plans to close all of its stores, with Gordon Brothers assisting with the liquidation. And Moran Foods, the parent of Save-A-Lot, was downgraded on Jan. 9 by credit rating agency S&P from CCC to selective default after it missed an interest payment on its loan that had been due Dec. 31.

The three retailers are not alone. In late December, Toms Shoes agreed to an out-of-court restructuring, proving that it’s not just legacy brick-and-mortar banners that are in danger. The loan default rate for retail by the end of the month was 7%, up year-over-year from 4.7% at the end of 2018, according to Eric Rosenthal, senior director at credit rating firm Fitch Ratings. By the end of 2020, Fitch projects the loan default rate to increase to 8%, versus 3% overall across industries. The default rate is the percentage of the total amount outstanding for all retail loans that went into default during the past 12 months, and is a measure of the sector’s overall health.

Pier 1 Imports, in particular, is said to be in imminent danger of default, with a rating of CCC- from S&P. The home furnishings retailer is fighting “tooth and nail” for survival, noted Sarah Wyeth, lead analyst for retail and restaurants at S&P.

NYDJ, formerly known as Not Your Daughter’s Jeans, is also among the troubled apparel brands. The company had a maturity date of Jan. 6, on which its $100 million loan came due, according to Fitch.

Neither Pier 1 Imports nor NYDJ responded to a request for comment as of the publication of this article.

What’s troubling for many of these retailers is that they are struggling even though the economy continues to hum along, Wyeth said. “What happens if there is a recession to retailers that are distressed?”

And as retail continues to quickly evolve, it requires constant reinvestment in technology and creating a frictionless experience between the physical store, mobile and online. When a retailer chooses to invest heavily, such as Amazon, it doesn’t really care about margins, explained Charles O’Shea, vice president and retail analyst at Moody’s. “Amazon’s investors don’t worry about profitability,” he said.

“Large retailers are benefitting at the expense of smaller retailers,” O’Shea added, as they have the advantage of pricing power and can use promotions, controlling the cadence of sales and markdowns. Smaller retailers with weak balance sheets don’t have that flexibility.