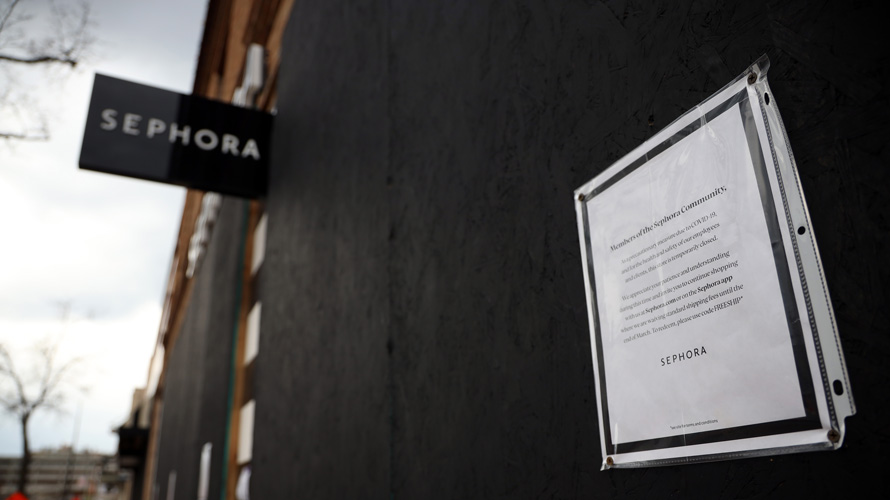 The beauty retailer is offering laid-off employees one week's pay as severance. - Credit by Getty Images

As store closures originally planned for the last two weeks of March extend into April, there have been financial consequences all across the retail industry. And it’s being felt most acutely by the employees who have been furloughed, or in many cases, laid off from their jobs.

The ongoing retail layoffs have hit all areas of the industry, from direct-to-consumer brands like Everlane, which laid off the majority of its part-time customer experience workers last Friday, to department stores such as Macy’s, which furloughed over 100,000 employees. Even Sephora, typically a high performer in the ongoing retail apocalypse, laid off its part-time employees earlier this week.

For the employees who have had to watch their jobs disappear, on top of dealing with all the other challenges that come with living through a pandemic, how these layoffs were handled made all the difference. Adweek spoke with two former Sephora workers about their experience being laid off and how the companies handled the difficult process.

Sephora laid off many of its part-time employees in a series of conference calls with district managers (who oversee a group of stores in a specific areas) on Tuesday. Full-time employees and select part-time employees, who Sephora said represent “the vast majority of our field workforce,” are still employed.

The news came after Sephora had stated it would pay employees through April 3, though there was some confusion, as both Grace and Carrie believed they’d be paid through the end of the month. For Grace, a Sephora store employee who asked to remain anonymous, the policy change and the way it was delivered—in a group phone call—made her feel “disposable.”

“They did not let anyone ask questions,” Grace said. “Not even about the severance package or what that meant for certain unique cases, nothing.”

However, Carrie, another Sephora employee who requested anonymity, said the fact that the news was delivered by a district manager, someone many employees hadn’t met and very few have a close relationship with, would have made an overly emotional delivery feel “false.”

Sephora is offering a severance package of an extra week’s pay, determined by an employee’s average hours over the past six weeks, according to Carrie, another Sephora employee who requested anonymity. (Grace, however, added that because foot traffic had declined in the weeks before store closures, hours had been cut, and the average hours wouldn’t reflect their typical income.)

Laid-off workers were also told that Sephora would try to rehire who it could, but “they’re not necessarily going to be able to rehire everyone,” according to Carrie—though, at her store, she believes only three employees remain, so some rehiring is inevitable. Grace echoed that statement, adding that she is skeptical of claims that the laid-off employees will be rehired, and said that her manager admitted that she “couldn’t make any promises.”

For Grace, the hardest part was when she was reminded to use her employee discount before her employment was officially terminated.

“That is the last thing I want to do as someone who just lost my job,” she said. “It felt like a sick joke on top of everything else.”

Sephora, for its part, characterized the decision as a financial necessity. “With the extended store closure and reality of the situation right now, we need to continue to navigate this crisis responsibly to ensure the long-term health of our business,” read a statement the company released about the layoffs. “With a smaller workforce required to execute in this new environment, we have made the difficult decision to let go of a portion of our part-time and seasonal store employee base.”

The retailer added that “all have been offered severance and provided with support resources, including coordination with companies that provide essential services and may be hiring at this time.” The company added that it is “our sincerest hope” to be able to rehire employees who had been laid off.

“I understand business is business, and this is happening to many people in all different industries,” Grace said. “But I feel hurt and betrayed by my managers and my company.”

The two have different feelings about the possibility of returning to Sephora after stores reopen. Grace said she doesn’t know if she would go back if given the opportunity, while Carrie said she would, and that she feels thankful for the severance payment.

“It could have been more a little less unceremonious,” Carrie said. “But overall, Sephora treats their employees very well, and it was a nice company to work for.”