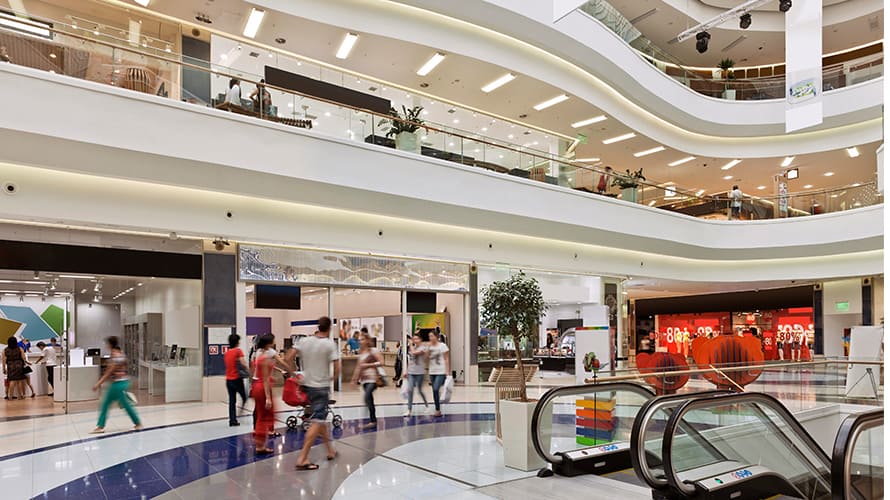 As Brookstone is dismantled, let’s explore 10 other titans of the mall era—and where they are now. - Credit by Getty Images

The graveyard of the American mall has tombstones of many erstwhile favorites, from Sam Goody to Waldenbooks. In many cases, these mall brands survived for decades—if not a full century—before the digital revolution, mass retail and younger generations forced them to take a long, hard look in the mirror.

Some didn’t recover. Many have been shuffled among private equity firms looking to sell them for parts. Still more are experimenting with new store concepts, pushing messages of inclusivity or retreating online. 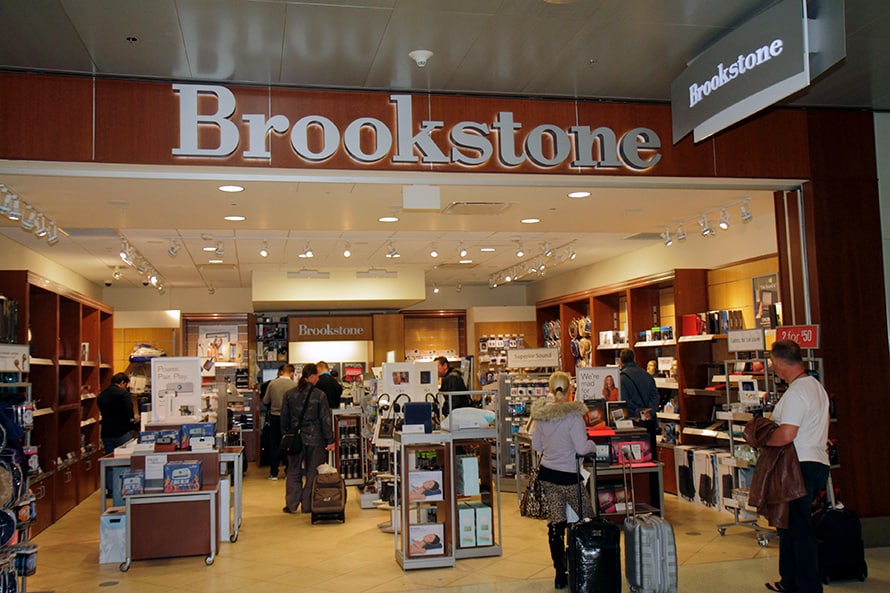 The latest victim is specialty retailer Brookstone, which helped make household names of brands like Segway, iRobot and Fitbit. Last week, the chain announced it is closing all 101 mall stores and seeking a buyer for what’s left: 35 U.S. airport locations and its ecommerce and wholesale businesses.

“The decision to close our mall stores was difficult, but ultimately provides an opportunity to maintain our well-respected brand and award-winning products while operating with a smaller physical footprint,” said Brookstone CEO Piau Phang Foo in a statement. Brookstone struck an agreement with Wells Fargo Bank and advisory, restructuring and investment firm Gordon Brothers Finance Company, the latter of which has become a vulture in private equity, of sorts.

As Brookstone is dismantled, let’s explore 10 other titans of the mall era—and where they are now. 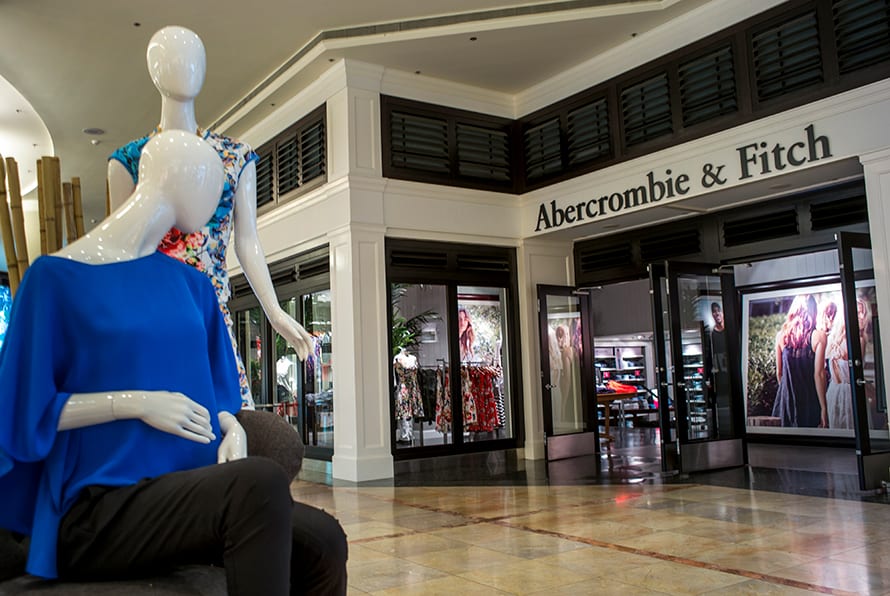 However, by 2013, its increasingly outdated ethos was immortalized in Jeffries’ comments about sizing—likening plus-size consumers to uncool kids who get wedgies and swirlies from Abercrombie customers—as its competitors were becoming more inclusive.

The brand issued an apology and began offering a wider range of sizes before Jeffries was fired in 2014. Abercrombie, however, arguably remains in sister brand Hollister’s shadow as it continues to close more of its 285 U.S. locations.

Abercrombie has since been working on a rebrand, including the return of its original logo in 2016. It also debuted a Gen-Z-friendly boutique concept that includes larger dressing rooms and phone chargers, as well as “shop-in-shops” like an apothecary and a denim room. Décor includes vegan leather—and the boutique is scented with “a lighter, cleaner, gender-neutral fragrance.” 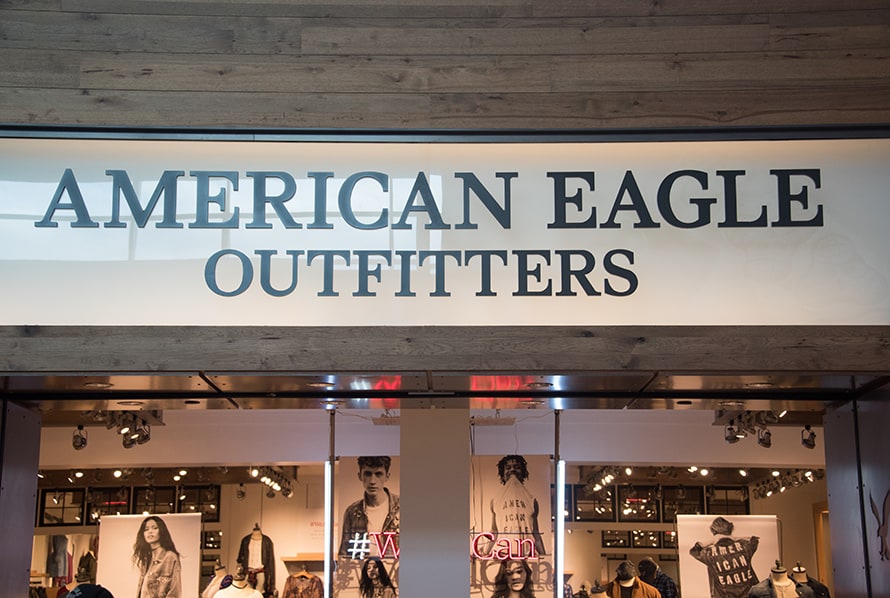 American Eagle Outfitters turned 40 in 2017 and is having a midlife crisis. It’s looking to the future with a new concept called AE Studio, which includes a jeans gallery and maker’s shop, an on-site social media team, free laundry and concierge iPads.

In addition, its fall 2018 jeans campaign features a diverse cast of actual customers and an employee that “reflects varied backgrounds, genders, sizes and passions.”

It, too, has closed some locations, but reports say it’s bouncing back—thanks, in part, to growth in ecommerce and investments in technology. 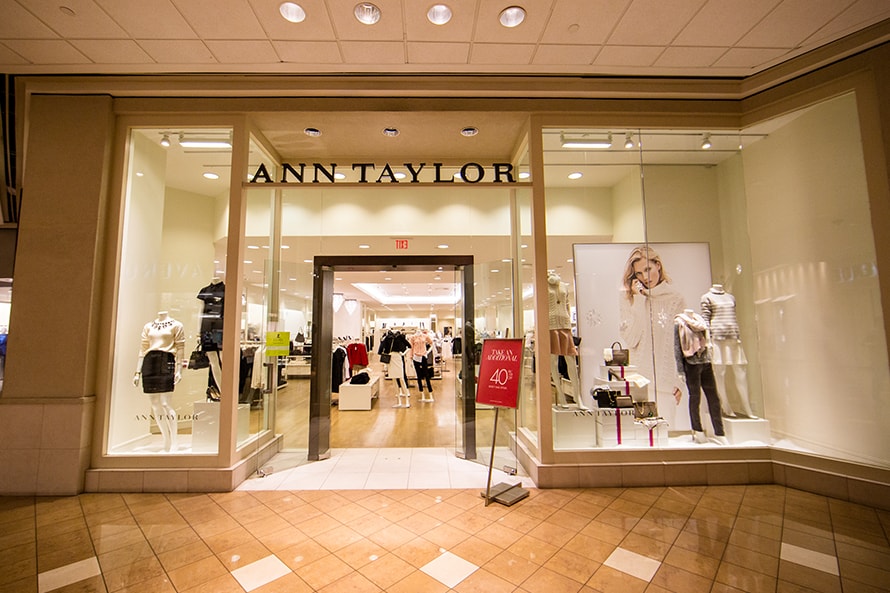 Retailer Richard Liebeskind opened a dress shop in New Haven, Connecticut in 1954, which he called “Ann Taylor” after a popular dress style in his father’s store that represented his vision of “the modern, stylish American woman.” It grew to 242 full-price and 122 discount stores in North America.

“As the American woman has evolved, so have we, staying one step ahead to bring her a wardrobe of possibilities,” the company claims.

But has it? Specialty retailer group Ascena Retail Group bought Ann Taylor’s parent company for $2.2 billion in 2015, but it, too, has struggled since. Recently, sales have been down as analysts say the brand speaks to middle-age women—and younger consumers aren’t shopping for career wear. Ascena operates 4700 locations, which also include Dressbarn, Lane Bryant and Loft, but analysts project this figure could be closer to 4000 by mid-2019 if Ascena can’t negotiate lower rents. It was not immediately clear how many of those locations are Ann Taylor stores. 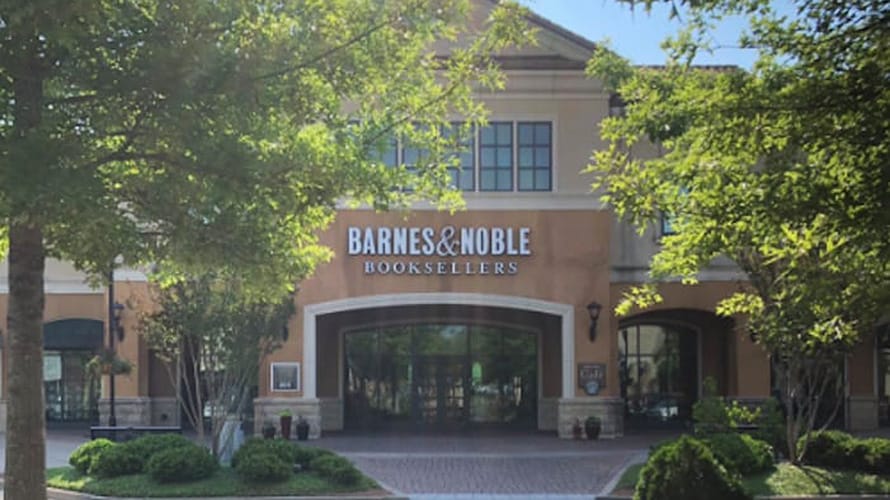 In a timeline of its history, Barnes & Noble called its superstores “the information piazzas of [1990s] America” which “combine a vast and deep selection of book titles with an experienced bookselling staff and a warm, comfortable and spacious atmosphere.”

The book giant steamrolled independent bookstores en route to a high of 726 locations in 2008. However, the tables have turned on Barnes & Noble as Amazon soars in popularity. The bookseller still has about 630 locations, but sales have declined for 11 years, and the Guardian reports it has lost more than $1 billion in value since 2013. It also recently parted ways with chief executive Demos Parneros after laying off about 7 percent of its staff following lackluster 2017 holiday sales.

But Barnes & Noble is still hanging on—making pivots like a new store concept “where books remain the hero [with] an expanded food and beverage offering, including wine and beer and a major commitment to hospitality featuring table-side service”—but it remains to be seen whether this, or programs like its Kids’ Book Hangout, will be enough to save the world’s largest bookseller. 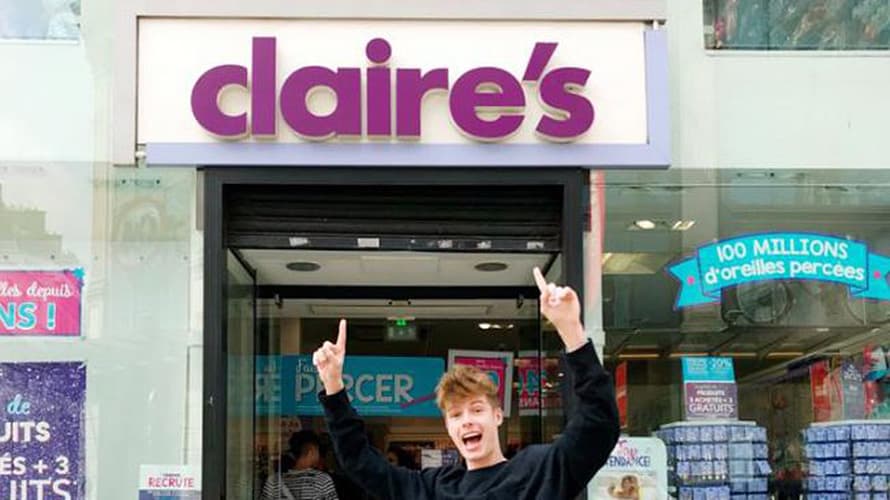 Accessories retailer Claire’s was founded in 1960 and had more than 1000 U.S. stores by 1992. Per LinkedIn, Claire’s has grown to more than 3000 stores in 47 countries today and is the number one ear piercer in the world, with an average of 3 million ears pierced every year.

“We believe Claire’s represents a ‘Girl’s Best Friend’ and a favorite shopping destination for teens, tweens, and kids,” Claire’s says.

Apollo Global Management bought Claire’s for $3.1 billion in 2007; co-chairmen and co-CEOs Bonnie and Marla Schaefer said the decision to sell their father’s company was reached “after an enormous amount of soul searching,” but they felt the deal was in the best interests of shareholders and that the partnership would help build a stronger global brand. In March 2018, Claire’s filed for bankruptcy, citing $1.9 billion in debt.

A press release, however, noted that unlike other bankrupt retailers, Claire’s has a “unique operational strength”: Consumers cannot get their ears pierced online. 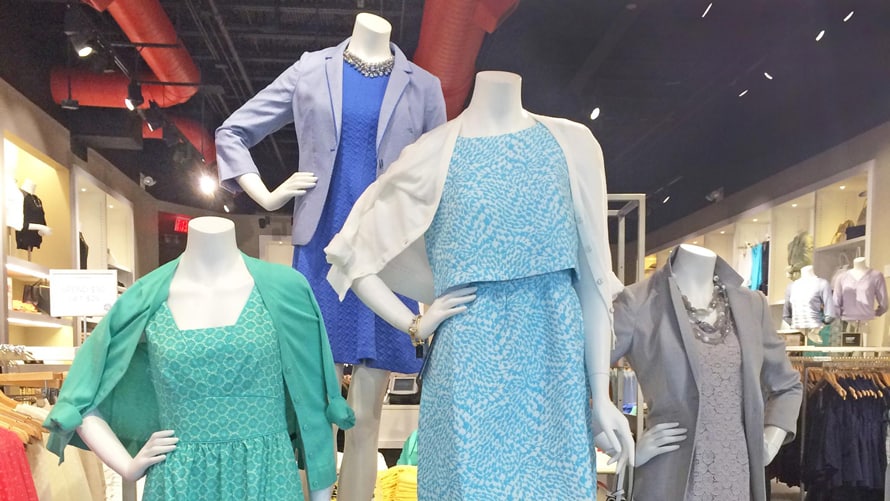 The Limited opened its first store in 1963, and its parent—now L Brands—sold the brand to Sun Capital Partners in 2007. It had a good run, but The Limited closed its 250 stores in January 2017.

Private equity firm Sycamore Partners, which owns other mall favorites like Hot Topic and Torrid, acquired The Limited’s brand and assets in February 2017 and said it planned to reintroduce the brand at a later date. That came in October 2017 with a site relaunch.

Most items on the website appear to be on sale; it’s unclear if The Limited will produce new merchandise or Sycamore is just getting rid of remaining inventory. Clothing and shoes from The Limited are also available on the website of department store Belk, which is another Sycamore portfolio company. Those items are also offered at a discount.

A representative for Sycamore declined to comment but said in an email that it “sounds like you’ve seen relevant press releases or other info” when asked about Belk and thelimited.com. 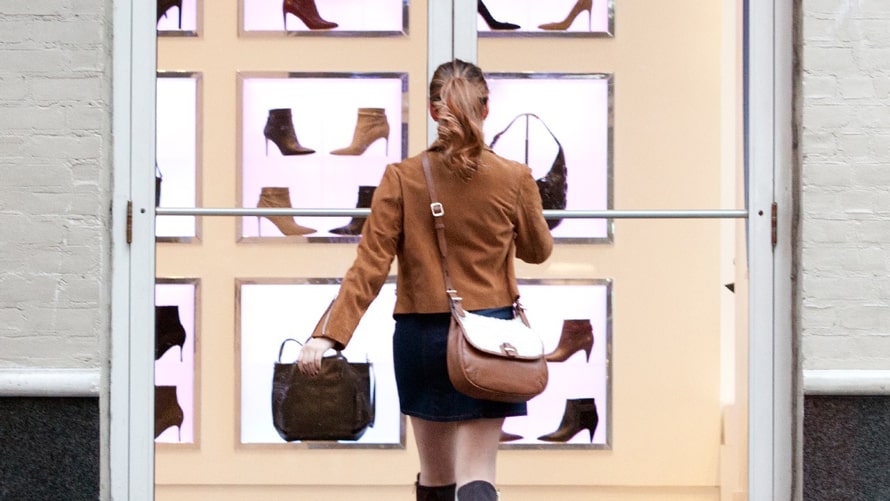 In 2014, Sycamore bought this shoe retailer—which reportedly had more than 200 locations circa 2006—as part of a deal worth $2.2 billion. According to the Wall Street Journal, Sycamore subsequently closed nearly all Nine West locations.

In April 2018, Nine West filed for bankruptcy and said it would focus on jewelry and clothing. Three months later, brand development, marketing and entertainment company Authentic Brands Group (which also owns Aéropostale, Fredrick’s of Hollywood and Jones New York) acquired Nine West and its sister brand Bandolino for a reported $340 million, saying it will “enhance the brands’ relevance through refreshed creative, engaging digital campaigns and key influencer partnerships” and it will expand into new territories and categories. 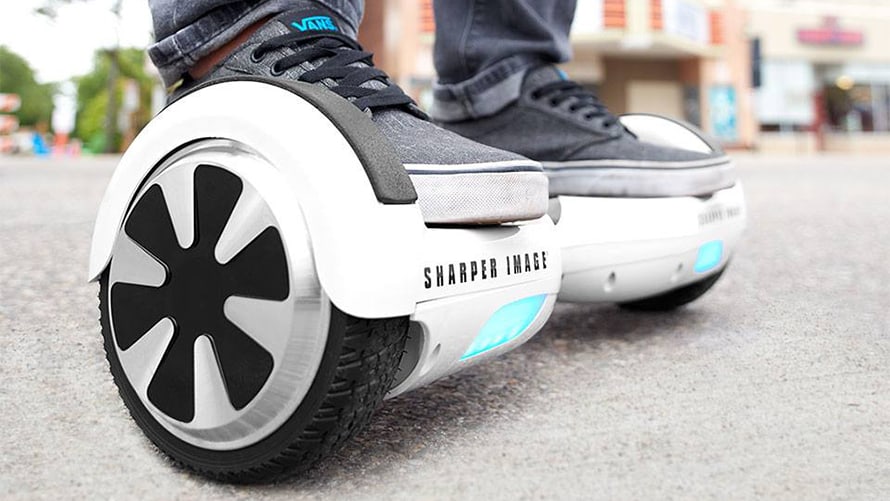 Like a real-life Michael Scott, Sharper Image founder Richard Thalheimer started out selling copy paper in the 1970s before adding a waterproof watch for runners in 1977. He advertised the watch in a magazine, which led to a catalog, which led to the massage chairs, lighted nose hair trimmers and wine chillers forever associated with the brand. It worked—for a while. But by in 2006, Thalheimer was ousted after a rough year that included a potential proxy battle, a board shakeup and falling share prices.

The Sharper Image filed for bankruptcy in 2008, saying it would close 90 of 180 stores and its shares were delisted from Nasdaq. The remaining stores closed shortly thereafter.

“It’s basically a store for men,” David Segal wrote in the Washington Post. “Especially men in desperate need of a gift, especially a gift for a man—arguably the most desperate creature in all of giftdom. The store is filled with objects that say, ‘I had no idea what to get you, but I spent some real money.’”

That was a rough gig in an uncertain economy. The Ionic Breeze air purifier lawsuit didn’t help. Nor did the proliferation of big box stores and online retail. Brand license firm Iconix Brand Group acquired The Sharper Image for $66 million in 2011. It was sold again to AEA-Investors-owned ThreeSixty Group in 2016 for $100 million.

Today, The Sharper Image lives on as an ecommerce site that boasts mystery coupons. Thalheimer has his own consumer electronics site, RichardSolo.com. 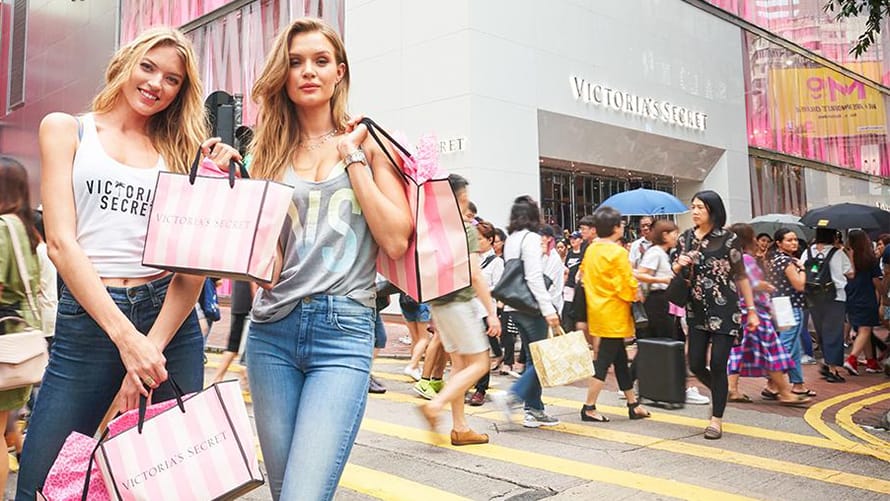 Retail umbrella company L Brands bought the Victoria’s Secret brand, which included six stores and a catalog at the time, for $1 million in 1982. It launched VictoriasSecret.com in 1998 and Pink, a brand celebrating university-age women and campus life, in 2004.

But as sales decline, the lingerie retailer is struggling to connect with mainstream consumers as it did so easily a decade or two ago, which analysts attribute to tone-deaf messaging and increasing competition from direct-to-consumer brands like ThirdLove and MeUndies. 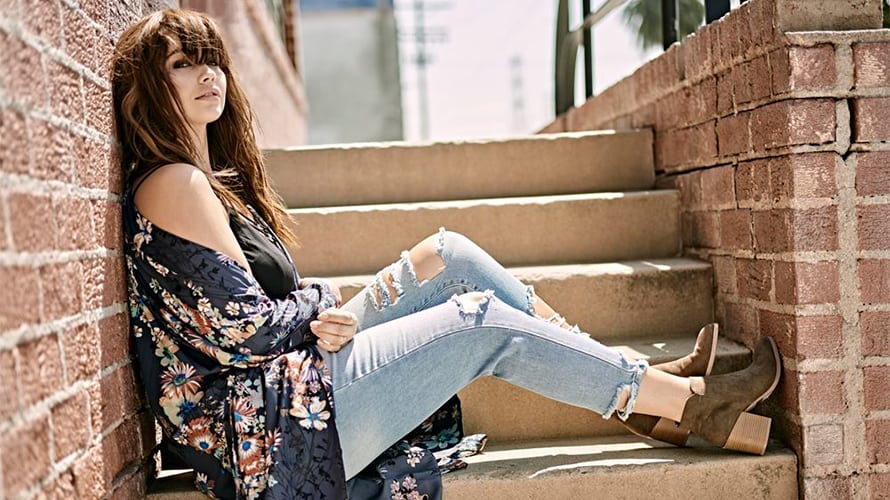 In 2014, teen fashion retailer Wet Seal had nearly 500 locations and more than $500 million in revenue. By January 2017, however, it announced it was closing the 170 locations that remained.

Gordon Brothers bought the brand the following March. Six months later, it relaunched Wet Seal as an ecommerce-only play and added a plus-size line, Wet Seal Plus & Curve, “to appeal to women and girls who don’t conform to the industry’s ‘standard’ shapes and sizes.” Gordon Brothers said the relaunch was focused online because “that’s where the brand could best engage with the Wet Seal consumer.”

It has also embraced a crowdsourced approach, letting fans called the Seal Squad decide which styles will be sold. Gordon Brothers says that while curating the line, it will continue to incorporate feedback from fans, including via Instagram tools, pre-sales and voting.

“Research showed that these consumers’ brand relationships were a two-way street, and this strategy was a way to tap into that,” Gordon Brothers said.

Social media monitoring firm Brandwatch, however, said the hashtag associated with this renaissance, #WetSealGetsReal, has only been used about 25 times since September 2017.