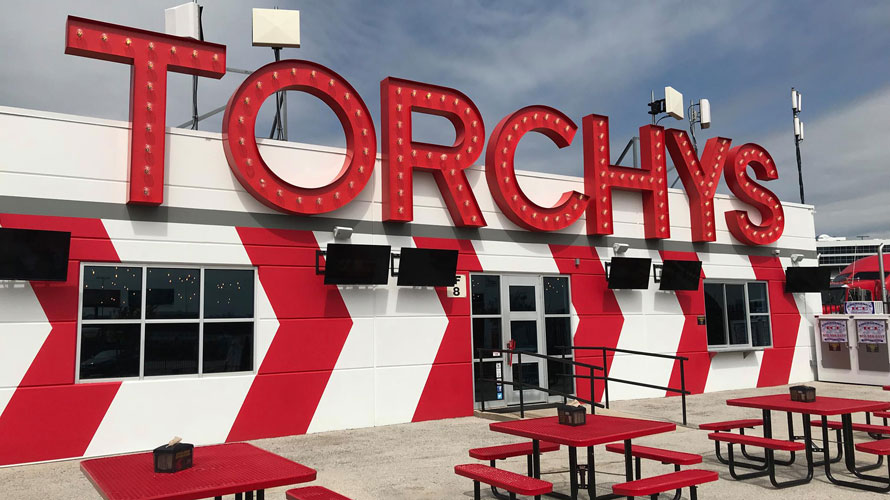 Torchy's Tacos, like so many restaurant chains, has had to quickly evolve due to restrictions on sit-in dining. - Credit by Torchy's Tacos

Torchy’s Tacos, an emerging restaurant chain based in Austin that fuses the cuisines of Texas, Mexico and the South, was on a trajectory similar to that of Shake Shack at the beginning of 2020. During the course of this year, it planned to open 20 new restaurants, adding to its 70-plus locations, according to CMO Scott Hudler. Its average unit volume was just under $4 million.

But with the arrival of the coronavirus pandemic, the chain, like many others, has had to temporarily shutter its dining sections and adapt to the new normal—fast.

“These are uncharted waters,” Hudler said. “There’s no playbook for this.”

Making such a massive switch is not easy, especially when part of the chain’s appeal is providing a unique in-restaurant experience—each location is designed to reflect the surrounding locality. “We treat our guests like you are a guest in our home,” Hudler said.

About two-thirds of Torchy’s sales were generated from its dine-in business. When restaurant closure edicts were issued, the company suddenly found itself in a situation where it had to make a number of rapid-fire decisions to quickly shift to 100% off-premise sales, Hudler said.

Ultimately, it only took the restaurant a matter of days to go from inside to curbside.

Fortuitously, the chain was already planning to put tablets in the hands of its employees to allow them to wander more freely throughout the restaurant to take orders and process payments on busy nights. So when restrictions were put in place on sit-in dining, the company accelerated its decision to implement the technology, then transferred it from the restaurant to the parking lot.

The company pressed forward to obtain tablets that were prepped to be payment card industry (PCI) compliant and to then have them delivered to the restaurants. There, customers would be able to both place and pick up their orders without having to leave their car.

Prior to receiving the tablets, Torchy’s Tacos put in place a makeshift curbside operation that involved pulling cables across empty dining rooms so that its point of sale (POS) system could be outside to handle orders.

In addition to shifting to curbside, the change also brought on the introduction of new offerings such as family meal packs. The packs cost $25 and include a choice of prepared meats, tortillas, toppings, rice and beans. Additional menu items include pick-up only margarita kits that come with tequila, housemade sweet-and-sour mix, lime wedges and a Torchy’s shaker. The kits were offered at its Texas locations after the state’s Gov. Greg Abbott issued a waiver to allow such alcohol sales in the wake of the pandemic. The hope is such offerings will allow customers to bring the Torchy’s experience home.

The company also implemented a contactless experience, in which customers were able to order and pay ahead from its website and receive instructions both for designated food drop-off areas and for social distancing while picking up their orders.

To supplement curbside sales, Torchy’s Tacos teamed up with DoorDash to offer contactless delivery. The chain also undertook partnerships with other businesses, such as Tiff’s Treats Cookies in the Austin area, so that the two businesses’ foods could be ordered and delivered together.

Consumers wouldn’t normally see partnerships like these, Hudler said, and they serve as an example of the creative ways the chain is driving sales.

The response to the pandemic is also spurring Torchy’s Tacos to rethink its long-term strategy.

“We’re not fast food or fast casual,” Hudler said. But he noted that takeout and delivery will assuredly increase as a percentage of overall business going forward.

As it looks to more of an off-premise model, Torchy’s Tacos is also weighing drive-thru, though that would entail a shift in the company’s real estate strategy.

Before the pandemic, drive-thru was offered at only one location, Hudler said. Another two locations had drive-thru under previous tenants, but those were shuttered when Torchy’s Tacos took over those premises. Those drive-thru stations will now likely be opened up.

Regardless, as the company adjusts short-term and contemplates its future, it sees opportunity both for talent and real estate when it emerges from this crisis.