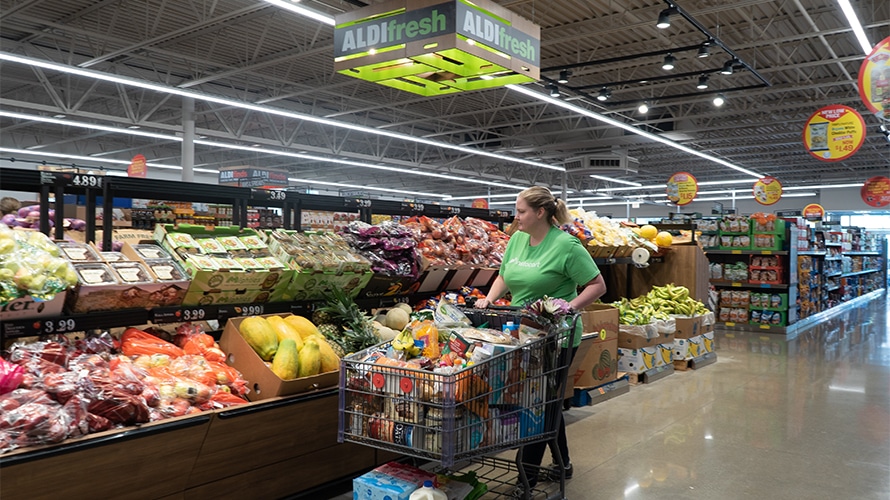 Instacart delivery is coming to 1,300 Aldi locations. - Credit by Aldi

As it seeks to become the de facto grocery-delivery service in the U.S., Instacart announced a partnership with discount supermarket chain Aldi to bring online delivery to 1,300 of Aldi’s 1,800 U.S. locations.

The deal will let customers in 35 states—including California, New York, Florida, North Carolina and Minnesota—get Aldi goods, including organic produce and antibiotic-free meat, delivered in as little as an hour. An Aldi rep said the rollout will be mostly complete by Thanksgiving.

This marks an expansion of a pilot program that started in August 2017 in Los Angeles, Atlanta, Dallas and Chicago.

A rep for Aldi touted convenience but would not comment further on why the supermarket chose Instacart for last-mile delivery.

In a statement, Instacart said it wants to deliver value and make quality food accessible and affordable. Indeed, while Walmart has stressed its everyday low prices as its distinguishing characteristic in online grocery, Instacart CEO Apoorva Mehta noted Aldi has 99 cent milk, which is not available elsewhere online.

“We see customers order on average once a week—that’s $3 per delivery, which is cheaper than a gallon of gas,” he said. “We are seeing more adoption from conventional retailers like Albertsons and Aldi … and also see our largest growing markets are not markets where Whole Foods has a dominant share—they’re closer to Chattanooga, Anchorage and Fargo, where the average household income is under $100,000.”

As Mehta noted, no one has figured out grocery delivery so far. That includes Amazon, Walmart, Kroger, Target and others, who are experimenting with additional last-mile delivery options like Postmates, independent delivery drivers, delivery startups and even autonomous vehicles.

Scott Galloway, a marketing professor at the NYU Stern School of Business who was also speaking at Code Commerce, said online grocery is going to become the most interesting space in retail—and Walmart’s pickup option is “the most exciting thing in retail.”

When asked about Walmart, Mehta noted that Instacart has partnered with Walmart and Sam’s Club in Canada but did not comment further.

And while Whole Foods was one of its first and biggest nationwide partners, Mehta said, Instacart has since helped bring a lot of other grocery stores online, too—although it took a couple of weeks after the announcement of Amazon’s blockbuster acquisition in June 2017 before other grocers started calling. Six months later, however, the platform had expanded its footprint to 300 retail partners and 4,000 cities in North America, reaching 70 percent of U.S. households.

In fact, Mehta said, Whole Foods is about 1.5 percent of the grocery market overall.

“Most Americans do not shop at Whole Foods,” he added. “Eighty percent of groceries in the U.S. are not bought at Walmart or Whole Foods—they’re bought at local retailers that partner with Instacart.”

There are thousands of grocery stores across the U.S. that need a partner to help them go online quickly, and Mehta said Instacart is poised to do so.

“In the early days of Instacart, we were losing money on every single visit and growing fast, which is not a good combination,” he said. “In every single market, as we continue to grow, we build volume and density. As we build density, each delivery takes less time—each minute we save in delivery saves 25 cents in gross margin.”

And Instacart intends to remain focused on grocery.

“Overall, it’s nearly a trillion-dollar market. It’s an enormous space,” he said. “We want to focus, get it right and be the category leader.”

That includes delivering from existing stores today, but potentially opening micro fulfillment centers somewhere down the road as the platform determines the best way to get groceries to customers’ homes.

“The reality is the scale of the overall market requires a solution for now as well as later,” he said.

“That means, for example, if the organic carrots are missing, should we replace them with conventional carrots?” he said. “If we understand, the shoppers make better decisions.”

And that means building customer trust.

“Trust is something we think about a lot,” he said. “With any new technology, you have to remove the barriers for customers to adopt. The first barrier we removed was most Americans couldn’t get groceries delivered, period. We’ve removed that barrier. Now comes the quality barrier—we want to be able to pick groceries better than the customers themselves.”

Mehta said Instacart earns revenue from these customers, as well as via revenue sharing on sales with retail partners and “a big chunk of revenue” comes from advertisers like Coca-Cola, P&G and Unilever.

In fact, Mehta said, Instacart has “one of largest coupon platforms on the internet for groceries” in which companies like P&G and Unilever promote their products through coupons on Instacart.

“Ad revenue is something quite underappreciated as a source of revenue,” Mehta said. “I think over time, a substantial portion of revenue comes from advertising—look at CPGs like P&G and others—they’re the largest advertisers in the world with billions of dollars spent on TV, Facebook and other channels. These are focused on brands, not direct response. No one has built a direct-response way to target customers. We want to build the AdWords for groceries.”