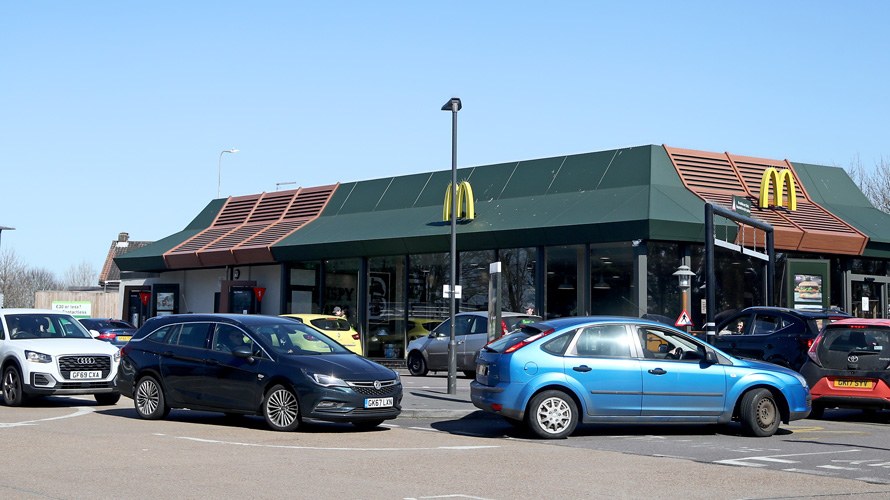 Burger purveyor McDonald's reported a 13.4% decline in comparable sales in March due to the impact from the coronavirus. - Credit by Getty Images

Quick service restaurants, whose businesses rely heavily on take-out, delivery and drive-thru, are expected to fare better than their casual dining counterparts that depend on sit-in dining.

For the week ended March 29, fast food restaurants overall saw transactions decline 40% compared to the same period a year prior, for example, versus the 79% drop for full-service restaurants, according to analytics provider NPD Group.

Overall, comparable sales in the U.S. for the first quarter were about flat, edging up 0.1%, compared to an increase of 4.5% for the same period a year prior. For January and February—before restaurants were compelled to curtail business as part of the effort to contain the pandemic in the U.S.—comparable sales were up 8.1%.

Due to the disruption caused by the outbreak, McDonald’s provided the performance update ahead of its first quarter earnings announcement slated for April 30.

“While we are faced with new challenges as a result, we are drawing on the strengths of our global System to manage through the crisis and position us for long-term growth,” said Chris Kempczinski, CEO, McDonald’s, in a statement.

He said about 75% of the fast food chain’s restaurants around the world are currently operational and adapted to focus on drive-thru, delivery and take-away. McDonald’s has implemented measures such as contactless drive-thru and delivery, social distancing, protective gear and enhanced hygiene and cleaning procedures to help protect customers and workers.

“Our January and February global comparable sales were strong in most countries. Beginning in mid-March, we experienced a significant decline in our results that varies across markets. The variation reflects the different levels of consumer behavior and government response,” Kempczinski elaborated.

In addition, McDonald’s said it has had no disruption in its supply for food, packaging, toys or equipment globally and continues to work closely with its suppliers on contingency plans to ensure the safety of its restaurants.

“While the disruption means our business is faced with immediate challenges, we believe our agility has positioned us well to adapt and continue to serve customers where it is safe to do so,” Kempczinski said.

Meanwhile, McDonald’s has taken steps to shore up its finances such as suspending its share repurchase program, increasing the cash on its balance sheet by raising $6.5 billion in the debt markets during the first quarter and reducing capital expenditures.