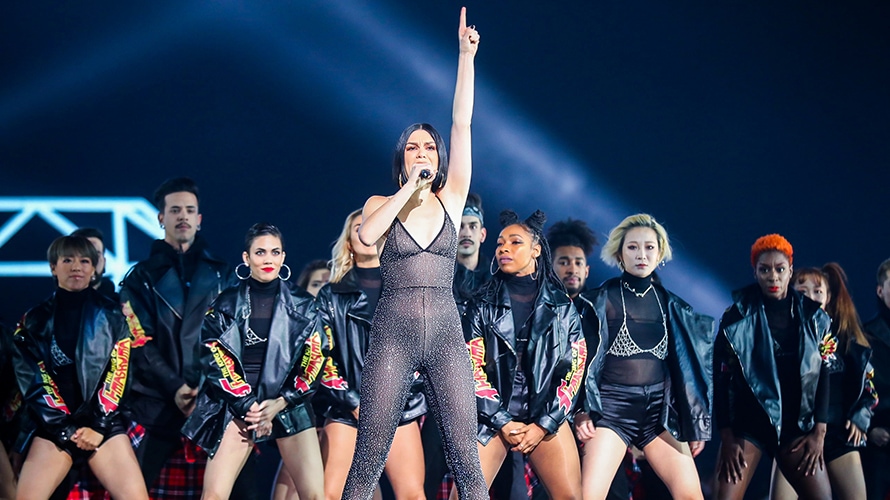 Only in American retailers’ wildest dreams could they sell more than $1 billion of merchandise an hour, yet that’s exactly what happened in China on Singles Day last year. China, which has long been the world’s most populous nation, surpassed the U.S. as the world’s biggest retail market in 2016. And that’s why even on Amazon’s best day—which to date is Prime Day 2018, when it reportedly needed 12 extra hours to sell a measly $100 million per hour—it doesn’t come close to ecommerce platform Alibaba and Singles Day.

Even though we’ve seen day-after-Thanksgiving sales gain steam in markets that don’t celebrate the holiday—including France, Norway and the U.K.—don’t count on U.S. retailers to jump on Singles Day as a way to preempt Black Friday with even earlier offers for American consumers anytime soon. That’s because even though Alibaba has called Singles Day the 11.11 Global Shopping Festival since 2015, it isn’t exactly global-global—and it may never be.

Singles Day started out as an anti-Valentine’s Day movement among college students in 1993. They picked 11/11 because it’s a date comprised of ones. The concept: Treat yourself.

Alibaba co-opted it in 2009 as an excuse to push winter coats, and the rest is history: Since then, China’s online audience has grown to more than 800 million consumers by Alibaba’s count. Along the way, Singles Day has matured into the single biggest shopping day in the world—selling more than $25 billion in 24 hours last year. The New York Times put this into perspective: Alibaba sold $1 billion in the first two minutes, which is equivalent to what Amazon sold in 1,800 minutes (or 30 hours) of Prime Day 2017.

And, with all due respect to Amazon’s Jeff Bezos and Marc Lore, Walmart’s CEO of U.S. ecommerce, it has considerably more star power than any retail events Western consumers are familiar with: The festivities include a countdown-to-midnight gala in Shanghai’s 18,000-seat Mercedes-Benz Arena with celebrities like model Miranda Kerr, who is confirmed this year, and footballer Lionel Messi, who once kicked goals against a shampoo bottle on behalf of sponsor Procter & Gamble. 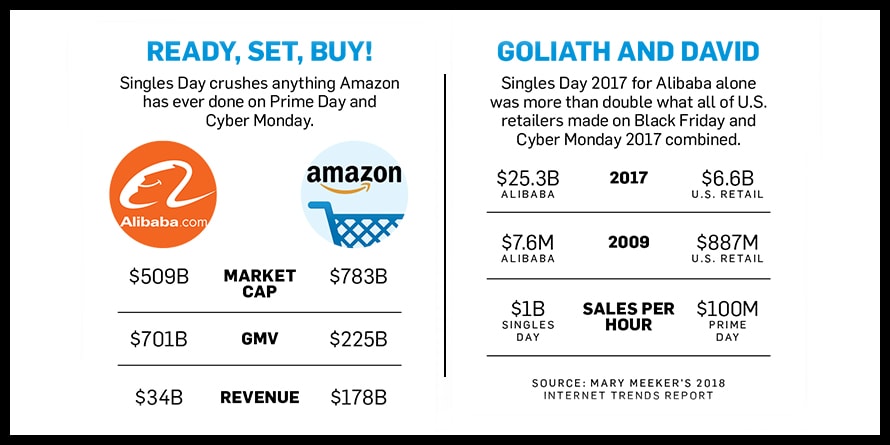 But that’s not to say Singles Day is limited to China: Ecommerce company Lazada, which Alibaba bought in March, is preparing to host its first 11/11 event in six countries in Southeast Asia this year. And marketers outside China have already made moves to reach the 1.4 billion people who live there—Alibaba boasts that international brands including Adidas, L’Oréal, Mattel, Mondelez, Nike, P&G and Unilever participated in 2017.

At the same time, consumers in the West already have three retail-driven holidays to choose from.

“Given Prime Day’s popularity, there may well be room for a [fourth] manufactured shopping holiday in the U.S., and Singles Day—with its spirit of treating yourself—fits nicely with other behaviors we see from millennial audiences,” said Kate Walters, executive planning director and head of strategy at digital agency Swirl mcgarrybowen.

So it certainly can’t hurt for U.S. retailers to offer Singles Day deals.

However, when Will Margaritis, vp of ecommerce at digital agency 360i, worked for Amazon retail company Woot.com from 2013 to 2015, he said Singles Day was “a pretty big deal for us” because they could set up deals to push products to consumers already on the lookout, but the results were ho-(ho-ho?)-hum.

“We found it was so close to Black Friday and Cyber Monday … so we were not seeing the lift we would have hoped for,” Margaritis added. “Everyone was already looking for deals, but it just sort of became a blur. There was an additional bump, but not a huge bump.”

That’s probably why Prime Day is in July—Margaritis said this is a point when most consumers have recovered from the holiday season and the next one seems far away.

“I keep seeing Prime Day as a bigger and bigger shopping day,” he added. “Probably eventually, Amazon might lose it … it’ll just be a consumer holiday.”

In addition, Margaritis said he thinks we may end up with an even split between Black Friday and Cyber Monday in the West and Singles Day in the East.

“There’s also the fear from the [U.S.] consumer that the best deals will be on Black Friday and Cyber Monday and if they jump early, they might buy something at higher price than if they wait two weeks,” he added. 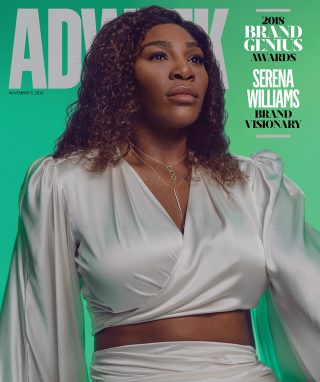 Click for more from this issue
This story first appeared in the November 5, 2018, issue of Adweek magazine. Click here to subscribe.
@lisalacy lisa.lacy@adweek.com Lisa Lacy is a senior writer at Adweek, where she focuses on retail and the growing reach of Amazon.