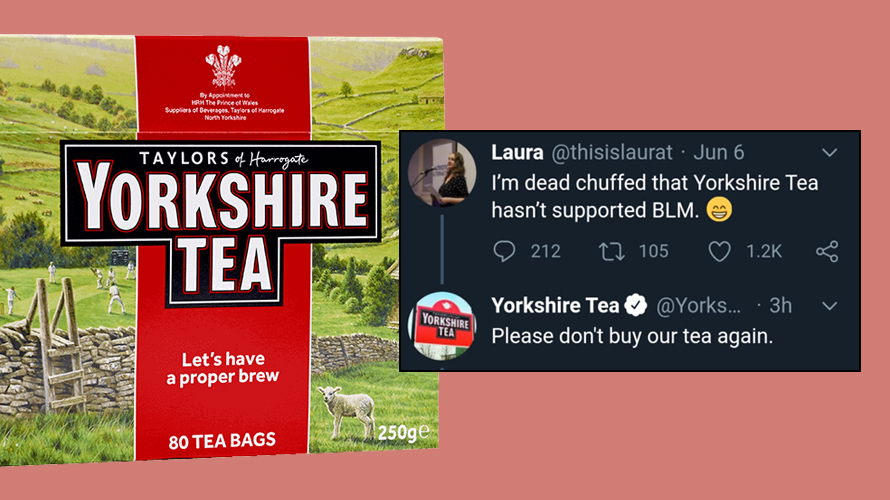 LONDON—It’s not often that two competing brands in a category come together in a show of camaraderie–but spotting an opportunity to display their support for Black Lives Matter, PG Tips and Yorkshire Tea banded together with a blunt message: Don’t believe Black Lives Matter? Don’t drink their teas.

Following the death of George Floyd, killed May 25 by a Minneapolis police officer who knelt on Floyd’s neck, demonstrations have erupted around the world to protest police violence against Black citizens, and in the U.K there have been several high profile marches in support. While the movement has a large support base in the U.K., not everyone is happy about it, with some criticizing demonstrators for injuring British police over the weekend.

Many brands have sat on the fence over whether to show their support for Black Lives Matter.

One person, by the name of Laura, tweeted leading tea brand Yorkshire Tea to say she was “dead chuffed that Yorkshire Tea hasn’t supported BLM.”

The brand surprised followers by responding on Monday:

“Please don’t buy our tea again,” the Yorkshire account said. “We’re taking some time to educate ourselves and plan proper action before we post. We stand against racism. #BlackLivesMatter”

We're taking some time to educate ourselves and plan proper action before we post. We stand against racism.
#BlackLivesMatter

“Yeah it does suck, Pamela. If you are boycotting teas that stand against racism, you’re going to have to find two new tea brands now,” the PG Tips tweeted, adding the hashtags #blacklivesmatter #solidaritea–the latter of which gained traction across Europe on Monday.

Yeah it does suck, Pamela. If you are boycotting teas that stand against racism, you're going to have to find two new tea brands now. #blacklivesmatter #solidaritea

The two rival brands coming together in support of Black Lives Matter sparked a number of responses.

“Our elected politicians are so awful that we need to look to hot beverages for moral guidance,” one person tweeted. Another said: “2020 might be an absolute shitshow but #solidaritea has certainly brightened up my morning!”

Not everyone was a fan, however. Some tweeted to say they were disappointed to see the brands “virtue signaling,” with one refusing to buy from a brand that called out members of the public on Twitter.