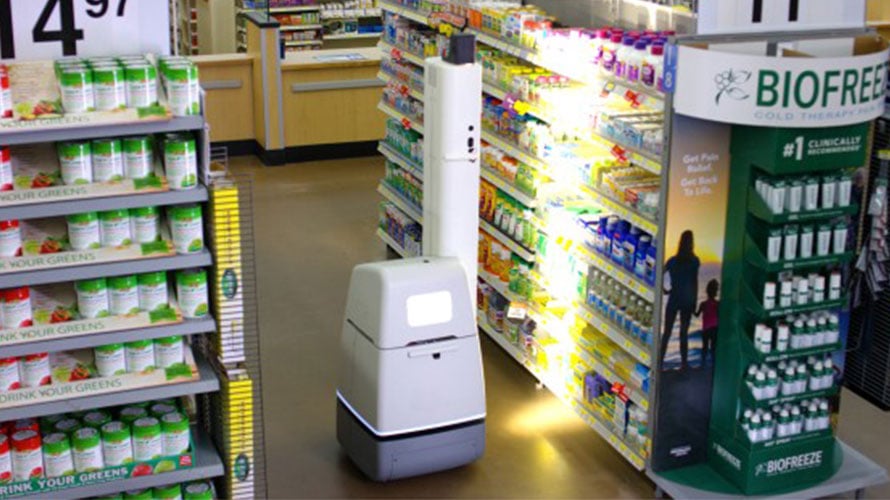 Walmart will be releasing nearly 4,000 in-store robots. - Credit by Walmart

Walmart is expanding its fleet of in-store robots following a 2018 trial at “just a few locations,” however, it did not provide assurances about employee jobs in its announcement.

Instead, Elizabeth Walker, manager, brand content of Walmart Corporate Affairs, said in a statement, “The idea is that by leaning into the future, associates will be able to have more satisfying jobs as retail continues to change.”

That’s arguably a more realistic take on the relationship between people and machines in the workforce versus, say, retailers like Giant Food Stores, which says that no human jobs are jeopardized by its spill-detecting robot Marty.

Walmart has 1.5 million U.S. employees, so there will still be roughly 375 human employees for each in-store robot. The latter includes 1,500 autonomous floor cleaners called Auto-C, which move through open parts of the store; 300 more shelf scanners, called Auto-S, which also rove around the store, scanning items on store shelves to “help ensure availability, correct shelf location and price accuracy”; 1,200 additional Fast Unloaders, which collaborate with shelf scanners to sort items from delivery trucks by priority and department; and 900 more Pickup Towers, which associates load with goods ordered online for in-store pickup and customers can use “like a giant vending machine to retrieve their purchase.”

In an email, a Walmart rep said investments in store technology are shaping how the retailer thinks about turnover and hours, but it is automating specific tasks rather than entire jobs. The tasks being automated are generally things it struggles to find, hire and retain associates to do. The rep also pointed to 40,000 new jobs created for online grocery picking in the last 18 months.

“We do expect some hours will be pulled over time for some of these repetitive [roles], but either through attrition … or through reinvestment into the store, we will try to absorb those pulled hours into different roles that didn’t exist a few short years ago, like the online grocery picking role,” the rep added.

In a statement, John Crecelius, senior vice president of central operations for Walmart U.S., said Walmart associates “immediately understood the opportunity for the new technology to free them up from focusing on tasks that are repeatable, predictable and manual. … It allows them time to focus more on selling merchandise and serving customers, which they tell us have always been the most exciting parts of working in retail.”

A report from the Brookings Institution, a nonprofit public policy organization, found that office administration, production, transportation and food preparation jobs will be impacted most by automation, along with men, young people and “under-represented communities.”

Retailers stress that robot helpers “[free] up our associates to serve [customers] better.”

As previously reported, robots are still fairly unsophisticated and not much of a threat, but they are improving a lot faster than humans. That’s partially why the United Food and Commercial Workers International Union has expressed concern on behalf of the employees it represents. We also saw some anxiety over this rapidly approaching robotic future reflected in the flood of Super Bowl ads featuring robots this year.

In a prior interview, Ben Goertzel, CEO of SingularityNet, a marketplace for AI algorithms, echoed Walmart’s statement, saying, “Going forward, there will be less and less economic utility for repetitive physical or mental labor carried out by humans. The good news is, this means more humans will be freed up for aesthetic, intellectual, spiritual, social and entertainment pursuits.”

However, he also noted that there will likely be some chaos as society adapts.