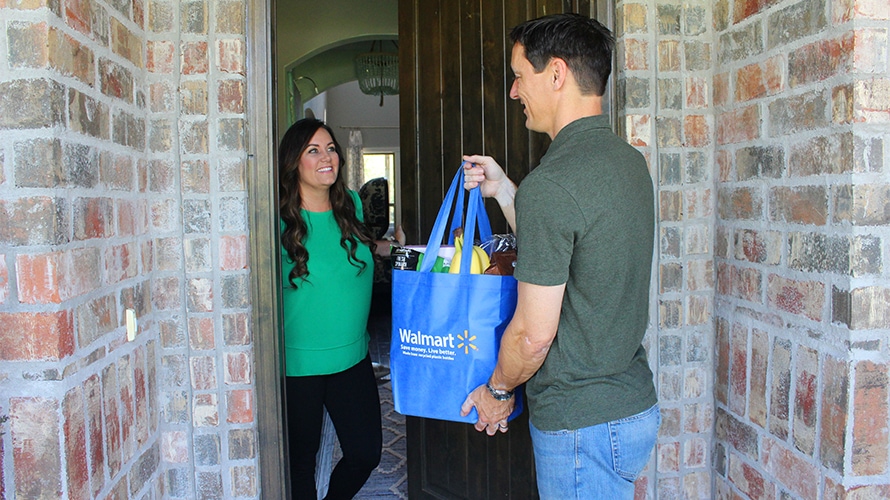 Spark Delivery is named after the Walmart Spark, the yellow symbol at the end of its logo. - Credit by Walmart

There’s yet another online grocery delivery service in town: On Sept. 5, Walmart announced it is testing Spark Delivery, which it described in a statement as “a crowd-sourced delivery platform.”

Spark Delivery—named after the Walmart Spark, the yellow symbol at the end of its logo—is in a pilot in Nashville, Tenn. and New Orleans. Walmart plans to scale to “a few more metro areas” this year.

Spark Delivery includes an in-house platform that enables independent drivers to sign up for windows of time and provides order details and navigation assistance.

The service uses drivers who partner with last-mile contractor management company Delivery Drivers, Inc., which takes care of recruiting, screening and background checks, as well as services like payment and accounting for drivers, who are paid per delivery.

Delivery Drivers also has a contractor entrepreneurial program that helps drivers establish their own small businesses.

“It is important to us at DDI that we help each independent driver run their transportation business correctly,” said owner Aaron Hageman in a statement. “We are excited to partner with Walmart to allow them to focus on providing great products while we can build and support a professional driver network to focus on the delivery side of the business.”

In June, Amazon announced a similar service: Amazon Logistics, which provides technology and operational support to individuals with startup costs from $10,000. Entrepreneurs in the program have access to deals on Amazon-branded vehicles, as well as uniforms, fuel and insurance.

Amazon said owners can start their businesses knowing they will have delivery volume from Amazon—and successful owners can earn as much as $300,000 in profit each year with a fleet of up to 40 delivery vehicles.

Amazon also pledged $1 million toward funding startup costs for veterans. (Walmart has its own Veterans Welcome Home Commitment, which guarantees jobs to any honorably discharged U.S. veteran who has separated from active duty since Memorial Day 2013. It has hired 206,000 veterans as a result.)

Amazon said tens of thousands of entrepreneurs have applied, and it expects more than 100 to be operational by the end of the year.

A Walmart rep said any resemblance is coincidential.

“With Spark Delivery, we were really thoughtful about creating a pilot that is beneficial for all involved, including drivers,” the rep wrote in an email. “Rather than forming this pilot after another program, we were focused on delivering a great experience for our customers and understanding more about the last mile of the delivery process.”

Customers place their orders on its site or on the Walmart Grocery app. Walmart stresses price is the differentiating factor between itself and competing options. But, like other services, its grocery delivery orders have a $9.95 fee and require a $30 minimum.

In a statement, Tom Ward, vp of digital operations for Walmart U.S., said: “We’re always looking for the best ways to serve [customers], so we’re exploring a number of different options for getting groceries from our stores to the customer’s front door—some in-house, some third-party.”

That includes partnerships with Postmates, DoorDash, Uber and Deliv.

But Walmart has a number of other grocery options, including a pickup service—which it said is now available in 1800 stores, with a total of 2100 to be open by the end of the year—as well as in-building and in-fridge delivery with smart access providers Latch and August Home.

Walmart also said it has more than 25,000 personal shoppers fulfilling these orders now, up from 18,000 earlier this year.

The race is certainly on to win hearts and minds in online grocery.

Amazon recently said goods from Whole Foods Market will be available in select markets for delivery through two-hour delivery service Prime Now. That’s in addition to its Amazon Fresh offering.

Ecommerce company Jet.com announced plans of its own to deliver groceries to New Yorkers in the fall.

And supermarket chain Kroger has partnered with robotics company Nuro to pilot an autonomous grocery delivery service of its own in an undisclosed market this fall.