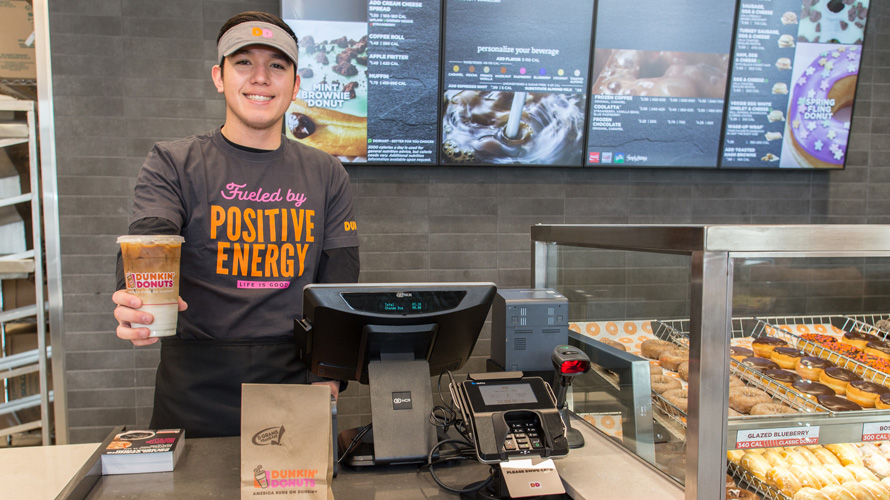 Dunkin' hopes to hire 25,000 new workers in time for summer. - Credit by Dunkin'

Jobs in quick-service franchises have historically been among the restaurant industry’s toughest to fill. But with over 30 million Americans out of work, an outfit like Dunkin’ might just be in for a wave of applications.

And it really wants them.

Beginning today, the chain kicked off a national recruitment campaign—the first in its 70-year history. Titled “Dunkin’ Runs on You” (a riff on the familiar “America Runs on Dunkin’” tagline), the BBDO New York-created campaign advertises openings at all levels in the restaurants, from cashiers on up to managers, with the aim of recruiting 25,000 new workers. The campaign is expected to launch on all platforms including digital, TV and in-store signage, with messaging in both English and Spanish.

“At a time of record unemployment,” said a company spokesperson, “Dunkin’ is a brand that is helping to get America working again.”

Which might well be the case, though it won’t be easy.

Dunkin’ is a wholly franchised system, which means the employees of its 8,500 domestic restaurants work for franchisees, not corporate. And while marketing support is traditionally a service performed by headquarters in exchange for the fees that franchisees pay, the fact that such an ambitious effort is emerging now is a testament to the unique business climate the country is in right now.

Restaurants were classified as an essential business during Covid-19, and 90% of Dunkin’ locations managed to stay open during the crisis. Even so, the fact that the company is looking for 25,000 new workers for the summer suggests that attracting and retaining talent in the service industry—in this case, one that puts employees in direct contact with people walking in off the street—is harder than ever.

According to the Bureau of Labor Statistics, the hospitality sector has been the hardest hit by the pandemic, with close to 7.7 million jobs lost. The restaurant industry accounted for 5.5 million of these. Earlier today, the National Restaurant Association reported that restaurant employment has hit its lowest level since 1989.

“Just three months ago, there were more than 12 million people on the payrolls of eating and drinking places across this country,” said Sean Kennedy, the association’s vp of public affairs. “But today, more than 6 million restaurant workers are home without a job—and that number is going to grow.”

Even as restaurants get the green light to reopen, many will have a hard time filling positions simply because front-line employees fear for their safety in coming into contact with customers. While those worries might pertain more to servers, who literally have to stand tableside to take orders, the fear extends to counter workers, too, despite the fact that many companies have installed Plexiglas guards at registers and increased the distance between customers and employees.

Even before the pandemic, fast-food restaurants were experiencing turnover rates as high as 150%—an astounding number, since just 100% turnover means that, at a given location, all of the employees quit within the year they were hired. The Covid-19 era hastened that mass exodus by adding the component of fear to a job that, in the eyes of many, was a dead end to start with.

Whether or not these factors contributed directly to Dunkin’s latest campaign, it does have a rather lavish incentive built into it—at least for the restaurant industry.

In addition to touting flexible hours and competitive pay, Dunkin’s effort will announce a new partnership with Southern New Hampshire University to offer a college education at a reduced rate. SNHU is an accredited nonprofit institution that offers online degree programs in some 200 fields.

Irrespective of whether the new marketing will draw applicants to Dunkin’, the chain does enjoy a loyal following among customers. In 2019, the chain held onto the No. 1 slot on the Brand Keys loyalty index for the 14th consecutive year.