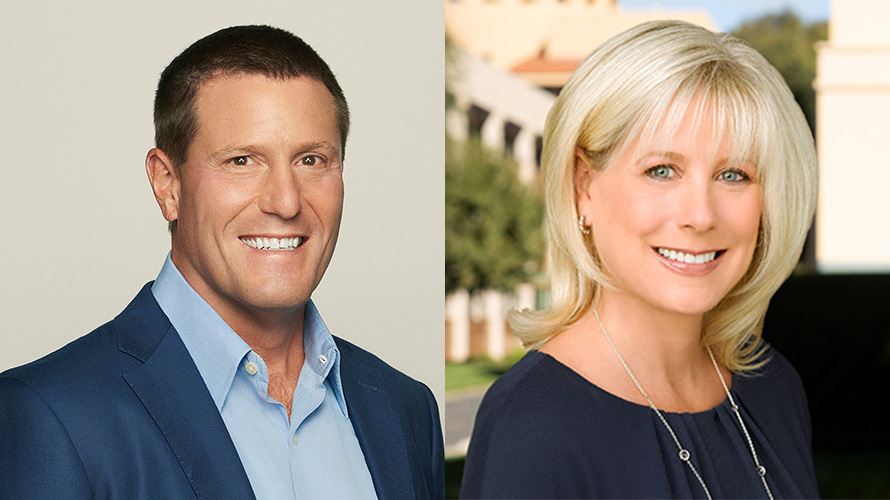 Kevin Mayer (l.) will be replaced at Disney by Rebecca Campbell, a 23-year company veteran. Disney

Kevin Mayer, the chairman of Disney’s direct-to-consumer streaming division, has resigned from the company to lead TikTok as CEO of the social video app.

The unexpected move, announced this afternoon, comes a few months after Mayer was passed over for the top job at Disney following longtime Disney CEO Bob Iger’s decision to step down from the helm of the company. Disney Parks chairman Bob Chapek, another Disney veteran, was tapped for that role instead, and has been serving as CEO since February, with Iger now executive chairman.

Mayer’s exit comes at a critical time for Disney’s streaming division, which has remained the only segment of the company that is seeing growth amid the ongoing Covid-19 pandemic that has hamstrung its normally lucrative parks, travel and retail businesses. And his exit comes a week before the beginning of Disney Advertising Sales’ virtual roadshow upfronts, which are slated to kick off the week of May 25 and were expected to feature Mayer.

Mayer will serve as CEO of TikTok and COO of parent company ByteDance, effective June 1. His arrival at TikTok comes at a pivotal growth moment for the company as lockdowns and stay-at-home orders have driven a new wave of interest in the social app, which allows users to shoot and edit short videos set to music. Comscore data provided to Adweek indicates that TikTok has grown rapidly during quarantine—the app brought in 23.2 million mobile unique visitors in February and 28.8 million in March before skyrocketing to 39.2 million in April.

Mayer, who had been heading Disney’s direct-to-consumer and international segment as chairman since 2018, will leave Disney after the successful debut of Disney+, which surpassed 54 million subscribers in five months, along with Hulu, of which Disney assumed operational control a year ago and is since growing with additional prestige programming from FX.

Disney, which is in the midst of a continued global rollout of Disney+ and a planned international expansion of Hulu, had recently begun a major marketing push around its bundled offering of Disney+, ESPN+ and Hulu, part of a continued effort to grow the subscriber base of all three offerings.

“Kevin has had an extraordinary impact on our company over the years, most recently as head of our direct-to-consumer business,” Chapek said in a statement about Mayer’s departure. “He has done a masterful job of overseeing and growing our portfolio of streaming services, while bringing together the creative and technological assets required to launch the hugely successful Disney+ globally.”

“Having been a part of the Direct-to-Consumer and International leadership team, I know what a stellar group it is, and I’m honored to be able to lead the organization during this dynamic and exciting time,” Campbell said in a statement. “Armed with the best creative content engines and technology teams in the industry, I am extremely confident in our ability to continue growing the business around the globe.”

“Kevin’s wealth of experience building successful global businesses makes him an outstanding fit for our mission of inspiring creativity for users globally,” said ByteDance founder and CEO Yiming Zhang in a statement.

“Like everyone else, I’ve been impressed watching the company build something incredibly rare in TikTok—a creative, positive online global community—and I’m excited to help lead the next phase of ByteDance’s journey as the company continues to expand its breadth of products across every region of the world,” Mayer said in a statement. “On a personal note, I’m thankful to the entire Disney team for the tremendous accomplishments we achieved together.”

Mayer will head from a beloved media and entertainment brand to a brand that, while loved by its users, is facing intense regulatory scrutiny. The Chinese-owned ByteDance has been under the microscope in the United States over national security concerns.

The company’s 2017 acquisition of Music.ly is under a national-security review by the Committee on Foreign Investment in the United States; it has also been heavily scrutinized for censorship allegations and fined for violations of children’s privacy by the Federal Trade Commission.

But Mayer will join at least one other Disney streaming veteran at his new post. Last month, TikTok named former Hulu vp of brand marketing Nick Tran as its head of marketing for North America.

@kelseymsutton kelsey.sutton@adweek.com Kelsey Sutton is the streaming editor at Adweek, where she covers the business of streaming television.
@ScottNover scott.nover@adweek.com Scott Nover is a platforms reporter at Adweek, covering social media companies and their influence.