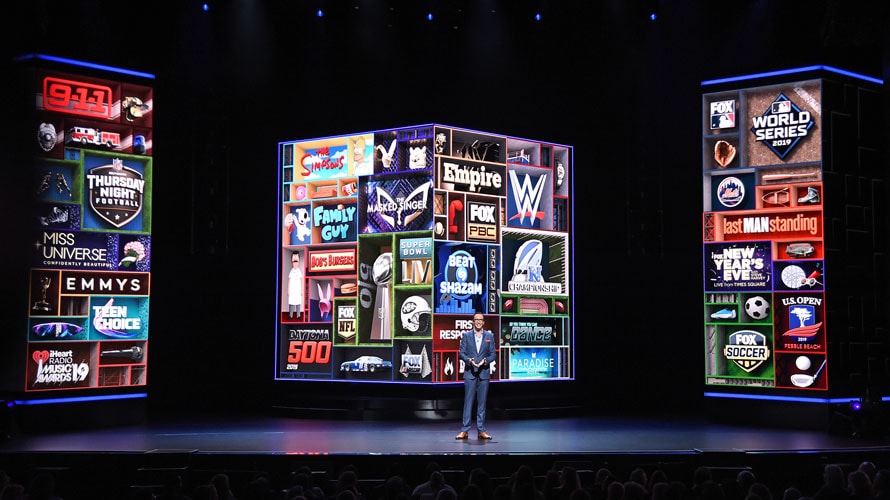 Fox Corp. is a much leaner company now than during last year’s upfront, when it was still part of 21st Century Fox. But it has capitalized on demand for several programs, including WWE’s SmackDown Live and The Masked Singer, to cross the upfront finish line with double-digit CPM (cost per thousand viewers reached) increases in primetime entertainment.

The company, which was spun off in March just ahead of the Disney-Fox merger, also saw high single-digit volume hikes in primetime entertainment in this year’s upfront, according to a source with knowledge of the negotiations. Fox Corp. consists of the Fox broadcast network, Fox News and Fox Sports.

As expected, upfront buyers were interested in several of Fox’s high-profile offerings next season, including Super Bowl LIV, Thursday Night Football, the return of The Masked Singer (last year’s most-watched freshman series) and WWE SmackDown Live, which will move from USA to Fox on Oct. 4.

There was strong primetime demand from telecom, automotive, financial and streaming-service categories.

Fox Sports had a strong upfront, with Major League Baseball and college football programming helping to drive CPM increases, while Fox News had the highest rate of change among the cable news networks, according to the source.

The Masked Singer, last year’s most-watched freshman series among all networks, will return Sept. 25 for Season 2, and its third season will debut Feb. 2 after Super Bowl LIV.

“It’s a great show to innovate around,” ad sales chief Marianne Gambelli told Adweek in May. “The beautiful thing about it is, it’s ripe for integrations and custom content, online extensions and cross-platform promotions, so we’re looking at all those angles.”

Fox is also capitalizing on a new revenue stream from WWE SmackDown Live, which will air year-round on Fridays for the next five years.

“Working with [WWE chief brand officer] Stephanie McMahon and the WWE organization has just been incredible,” said Gambelli. “Their ability to create storylines and innovate with marketers is incredible, beyond anything I’ve ever worked with before.”

The slimmed-down Fox Corp. promised “laser focus” at its first upfront event in May, where Fox Entertainment CEO Charlie Collier said the company was “proudly ad-friendly, and we’re proudly independent.”

While Gambelli has overseen Fox News and Fox Business Network since 2017, this was her first upfront handling negotiations for the entire portfolio after being promoted in October.

She told Adweek in May that her upfront message to advertisers has been “because we’re smaller and more nimble in this new organization, we can even bring them closer to our content and to our audience.”

She’s rolled out several new ad products including “fast breaks,” which she described as an iteration of Fox’s JAZ pods (just the A and Z positions in an ad break) that offer shorter breaks and a wider availability.

Also on the way: “prediction pods,” which Gambelli said are aimed at keeping viewers engaged over commercial breaks by “leveraging social conversation around our shows”; “future now,” where advertisers can sponsor early access to future episodes; and “Absolute As,” offering exclusive ownership of the pre-roll ad position on Fox’s most popular streaming shows.

Several other networks and media companies have already completed their upfront business, including The CW, CBS and Crown Media Family Networks, which owns Hallmark Channel. Most recently, WarnerMedia crossed the upfront finish line, just a week before ad sales chief Donna Speciale exited the company as part of an ad sales overhaul.