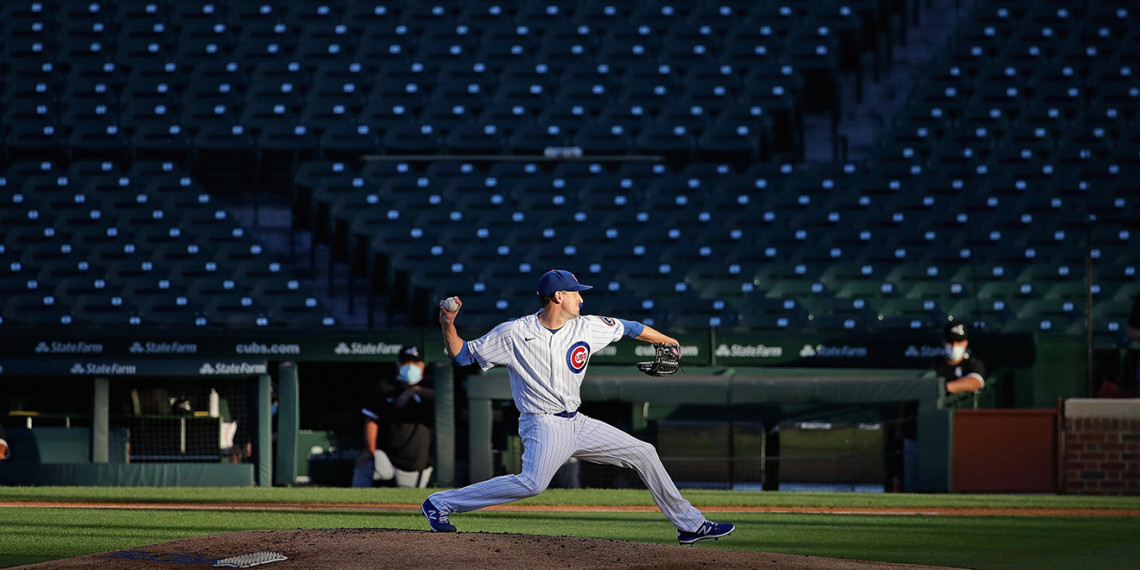 The Chicago Cubs are one of eight teams that will be featured in Fox Sports' quadruple-header on Saturday. Getty Images

Networks have been eagerly awaiting the return of live sports to their airwaves and the billions in dormant national ad revenue those games bring with them.

For Fox Sports, that much-anticipated moment arrives Saturday, as it kicks off its Major League Baseball regular season coverage with a quadruple-header: three consecutive games on Fox followed by a nightcap on Fox Sports 1.

Advertisers have rushed to take advantage of MLB’s return to TV. “We’re well over 90% sold out for the regular season, with a lot more business working,” said Seth Winter, evp of sports sales at Fox Sports, calling the advertiser interest “beyond our wildest dreams.”

Close to 75% of Fox Sports’ MLB inventory was sold prior to the March shutdown and in last year’s upfront, with other 20% or so coming as a result of talks that heated up as summer training opened and advertisers saw “proof of performance,” said Winter. “I think the marketplace has been waiting to see that Major League Baseball, Major League Soccer, all the other sports can get on the fields of play and compete.”

“The national political landscape is so different today than in other elections, where you’ve seen most of the political dollars invested in swing state spot markets,” said Winter. With so many swing states potentially up for grabs this year, the candidates and PACs “realize it’s more efficient for them to buy national media versus local media.”

Almost all brands with Fox Sports’ MLB ad inventory that had been put in abeyance when games were paused in March opted to stay in baseball. “One or two” asked for their money back, said Winter, then returned and “paid a little bit of a premium to get back in,” a 10% premium over prepandemic pricing.

“That will accelerate as we get into the remaining portion of our inventory,” said Winter. “We’ve seen an enormous demand for baseball.”

All of Fox Sports’ fixed positions are already sold out for Saturday’s quadruple-header. The three Fox games are: the Milwaukee Brewers against the Chicago Cubs at 1 p.m. ET; the San Francisco Giants and Los Angeles Dodgers at 4 p.m.; the New York Yankees face the Washington Nationals at 7 p.m. Then on FS1 is San Diego Padres against the Arizona Diamondbacks at 9 p.m.

Only floating spots are available for those games, which would run during pitching changes and other interruptions of gameplay.

Every brand that was put in abeyance came back at the same rate, and Fox replicated its existing plans as best as possible, given the novel coronavirus-truncated season. This year, each team will play 60 regular season games, down from the usual 162.

Of course, the real MLB TV windfall comes not from the regular season—which brought in an estimated $144.7 million in national ad revenue last season, according to Kantar Media—but from the playoffs, an estimated $338.5 million last year.

Winter expects those playoffs talks to start earlier than usual this year, given how much regular season MLB inventory is already spoken for. “People are going to realize, if they don’t act soon, they’re not going to be able to get into it because we can’t create inventory,” said Winter.

Networks have eagerly awaited the billions in ad revenue since every major professional sports league shut down in March due to Covid-19, and have been awaiting MLB’s return, followed by the NBA next week, to electrify the faltering TV ad sales marketplace.

While early live sports results like Nascar and golf were promising in May and June, “we’re doing our best not to overreact. But you can sense the excitement that surrounds events that are drawing audiences that normally would be reserved for more of the premium live sports properties,” Jeremy Carey, managing director of Optimum Sports, Omnicom’s sports media and marketing division, recently told Adweek. “Everything points to a consumer audience that’s just starving for competition.”

Winter and his team are also in talks for the coming NFL season. Fox’s first America’s Game of the Week matchup on Sept. 13 will feature Tom Brady and his new team, the Tampa Bay Buccaneers, facing off against Drew Brees and the New Orleans Saints. Fox began meeting with agencies in May following the football schedule release to jumpstart this season’s NFL talks.

“Early indications are that it’s going to be a very good NFL marketplace,” said Winter, who expects that, like baseball, “people want to be comfortable that we will have a product on the field.”

As fall approaches, “people are really interested in sports because that’s the last real scaled event programming that they can invest in,” said Winter.

Meanwhile, college football’s return this fall is much more of a question mark than the NFL’s.

“I always counsel my team on one very simple premise: You can only operate on the information you have today,” said Winter, noting that as of now, Fox’s conferences (including Big Ten, Big 12 and Pac-12) intend to play football this fall. Winter hopes to receive a schedule in the next couple weeks, “and then we’ll go from there.”

While several brands have shifted to a calendar upfront due to pandemic uncertainty, Fox “hasn’t seen that much disruption” in its sports talks, said Winter.

“There are some categories that are more under siege than others [like travel],” he continued. “But for the most part, I think there’s tremendous pent-up demand and they look at football and sports as a way to get their message out in the broadest manner, in the best environment and as efficiently as possible.”