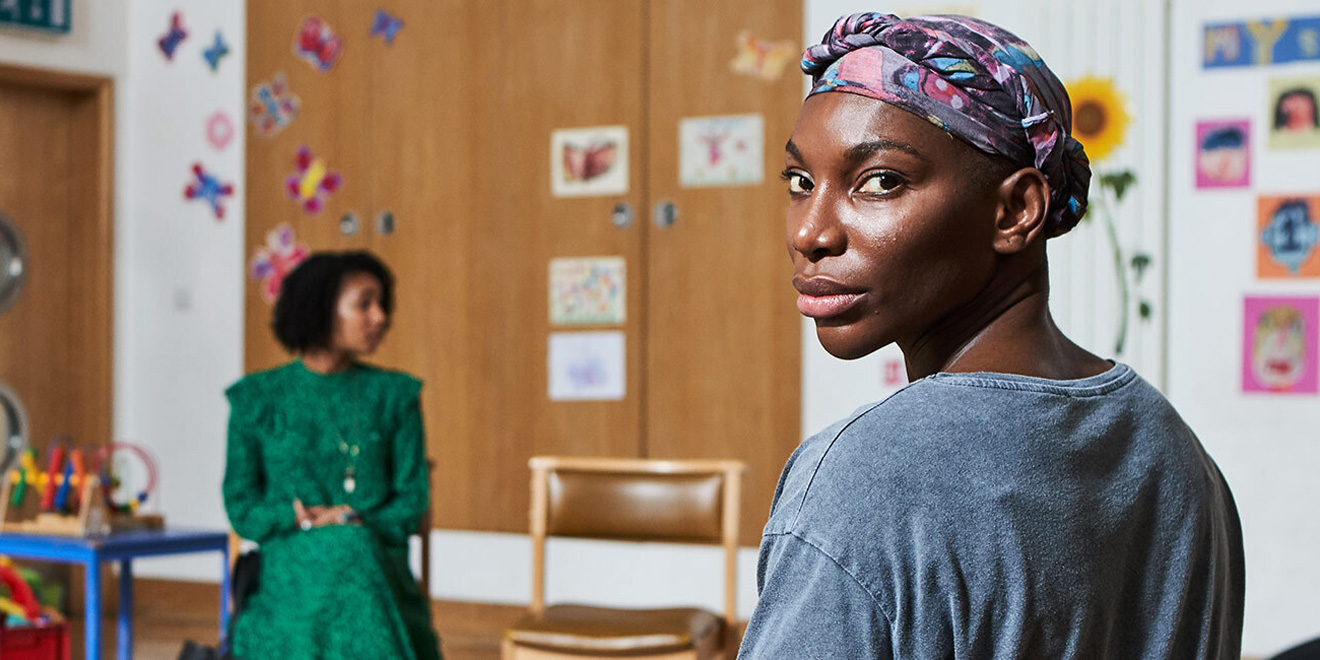 Michaela Coel wrote, produced, directed and and stars in HBO's new series I May Destroy You. HBO

I May Destroy You, HBO’s new dark comedy series from Michaela Coel, follows a millennial Black woman navigating friendships and relationships while recovering from sexual trauma. Coinciding with the series premiere June 7, the WarnerMedia-owned network will launch “Gathering the Pieces,” a monthlong digital campaign to raise awareness around themes explored in the series and to offer resources to Black and queer people.

The campaign will offer live conversations on social media, hosted by Black influencers and mental health and wellness experts. Conversation topics including sexual wellness and freedom, dating and relationships, self-love and self-care and trauma and therapy.

The 12-episode first season follows Arabella (Coel), a writer in London who’s forced to reexamine and rebuild her life after her drink is spiked during a night out.

“The themes of Michaela Coel’s extraordinary I May Destroy You touch upon experiences that are all too real and disproportionately affect many people, especially in the LGBTQ+ and Black communities, who sometimes suffer in silence,” said Jackie Gagne, vp of multicultural marketing at HBO, in a statement. “We created this compelling series of live community conversations in order to organically and respectfully engage audiences in discussions around the topics of consent, dating and relationships in this modern landscape, where the fine line between liberation and exploitation can be unclear.” 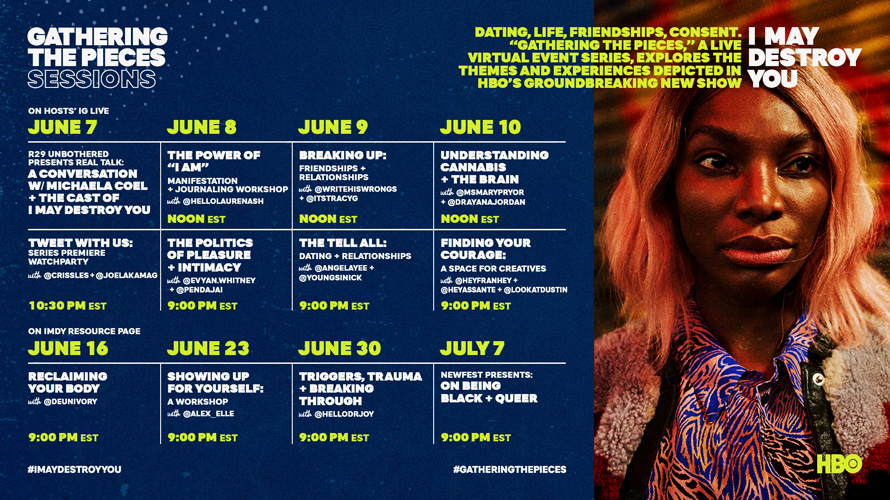 HBO and Verb curated a month of live talks on social media and an online resource hub.
HBO

HBO partnered with experiential agency Verb to produce the campaign and develop programming, which begins with a live Instagram conversation with Coel and the cast, hosted by Refinery29’s Unbothered (@r29unbothered), a media platform for Black millennial women. Sunday’s premiere will also include a live Twitter watch party hosted by Crissle West and Joél Leon.

Through June 10, the campaign will offer twice-daily virtual events on hosts’ Instagram Live, including “The Power of ‘I Am’,” a manifestation and journaling workshop led by meditation expert Lauren Ash; “Breaking Up: Friendships + Relationships” with J. Wesley and Tracy G and “Finding Your Courage: A Space for Creatives” with Francheska Medina, Assanté Smith and Dustin Ross.

“As we collaborated with HBO on the ‘Gathering the Pieces’ campaign, our goal was to remain authentic to the experiences depicted on the show and select peers and experts who could help the public explore the sensitive themes and tonality of the series, with the aim of empowering marginalized groups and survivors,” said Shannon Jones, co-founder of Verb, in a statement. “Social media is where people gather to share and explore new topics, so a social-first campaign was the right avenue to raise awareness and reach audiences with these important conversations and healing resources.”

Bridging the gap between mental health and pop culture is a central focus of my work, and I’m very excited to be an #HBOpartner on the host committee for "Gathering the Pieces," a virtual event series in anticipation of Michaela Coel's groundbreaking new show 'I May Destroy You.' It is an honor for me to gather in spaces, virtually and otherwise with my community, to discuss how what we’re watching, listening to, and reading, impacts us and vice versa. As a part of this series we’ll be chatting about topics ranging from friendship and modern dating to consent, trauma and more. I hope you’ll join myself and the other incredible members of the committee including @alex_elle, @angelayee, @heyassante, @crissle, @deunivory, @drayanajordan,@lookatdustin, @evyan.whitney, @heyfranhey, @writehiswrongs, @joelakamag, @hellolaurenash, @msmarypryor, @youngsinick, @pendajai, & @itstracyg in these discussions. #imaydestroyyou #gatheringthepieces

Following the Instagram Live talks, HBO will hold weekly, post-show live sessions on Tuesday nights through July 7 on IMDYResources.com, a resource hub for the show. Events include “Triggers, Trauma + Breaking Through” hosted by Dr. Joy Harden Bradford and “On Being Black + Queer” in partnership with NewFest, New York’s annual LGBTQ film festival.

Additionally, HBO partnered with creative agency the Creative Collective NYC and online mental wellness platform Therapy for Black Girls to curate seeding kits inspired by themes in the series, offering a variety of items that encourage self-care. The partnership will also extend to social media with prompts meant to drive conversation around different approaches to self-care and the series.

Since the pandemic started, HBO’s multicultural marketing team has been focused on delivering virtual events around programming to consumers at home. The brand held a multifaceted virtual block party for Insecure Season 4, and live digital gatherings for new series We’re Here and Betty.