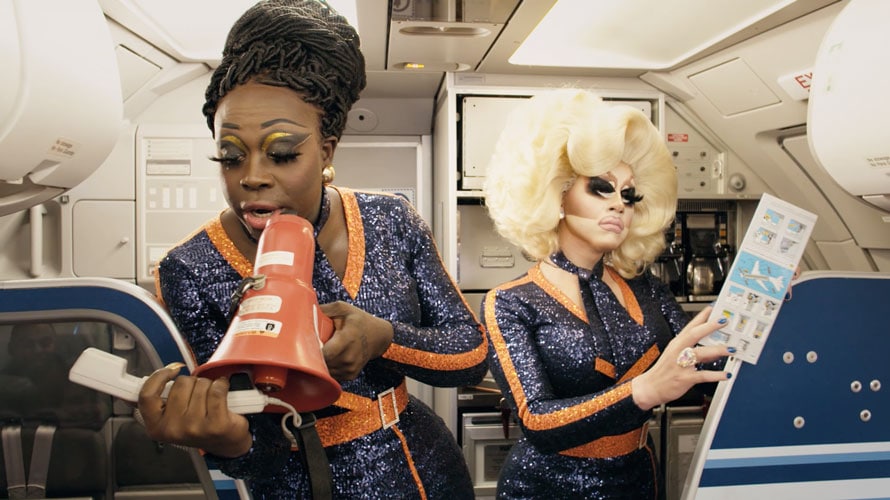 RuPaul’s Drag Race is sashaying down a very different kind of runway as part of its new partnership with JetBlue.

The airline and hit VH1 reality competition show have teamed up for a Pride Month initiative in which JetBlue has given a RuPaul’s Drag Race-inspired name to one of its newest aircraft: the Shantay Blue Stay. The moniker, which will appear permanently on the plane, is an homage to RuPaul’s signature Drag Race catchphrase, “Shantay, you stay,” which informs contestants that they have made it to the next round.

Two of the show’s most famous contestants—Bob the Drag Queen (who won Season 8) and Trixie Mattel (who won Season 3 of RuPaul’s Drag Race All Stars)—appear in a new in-flight feature video spoof as flight attendants, celebrating the arrival of Shantay Blue Stay. In the video, which includes a look at the new Shantay Blue Stay aircraft, they also highlight various features of JetBlue, including unlimited free snacks.

The video will be featured on JetBlue, VH1 and RuPaul’s Drag Race’s social channels, while a “making of” version of the spot will soon air on JetBlue planes. The campaign and video were produced in-house by Viacom Velocity. 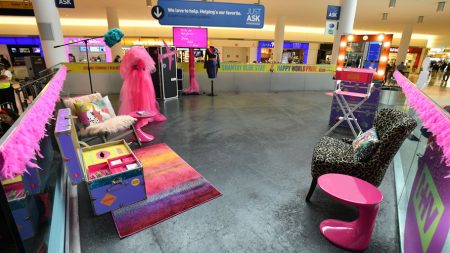 While the terminal takeover was only for this week, the new Airbus A320 aircraft will keep its Shantay Blue Stay name for however long it is in service. The plane, which will operate on routes throughout the U.S., Caribbean and Latin America, also features JetBlue’s new tailfin design, called Spotlight, which has bold splashes of the brand’s blue and orange colors. 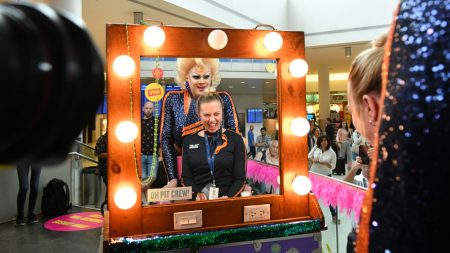 “For more than a decade, RuPaul’s Drag Race has celebrated inclusivity in all forms,” said Amy Wigler, svp of integrated marketing/branded content, VH1, in a statement. “It is VH1’s goal to align the show with like-minded organizations who are also committed to bettering humanity through love and acceptance, which is why we are thrilled to be partnering with JetBlue on this very special pride month initiative.”

For JetBlue, the RuPaul’s Drag Race partnership is one of several ways the company is supporting various LGBTQ organizations throughout Pride Month. For the third year, the airline is a proud supporter of The Stonewall Inn Give Back Initiative (SIGBI) and is joining the New York City Gay Men’s Chorus in the New York City Pride March on June 30.

“Every day, but especially as we celebrate World Pride in our hometown [of New York], JetBlue values the uniqueness of each and every individual—not only because it’s the right thing to do in keeping with our integrity value, but because we think it’s more fun that way, too,” said JetBlue president and COO Joanna Geraghty in a statement.