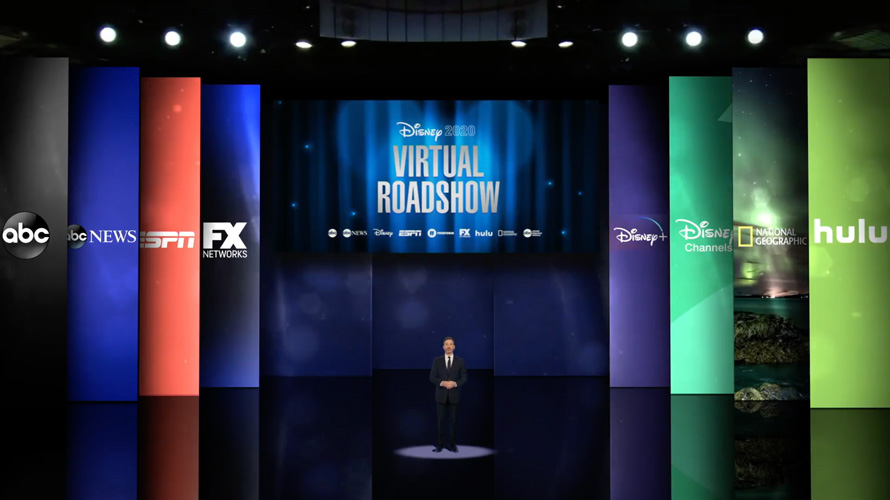 "Next year, we’ll give you shrimp," Kimmel promised buyers. "But in the meantime, we need cash." Disney

Disney pitched advertisers on how the company could help rejuvenate their business following Covid-19 during its virtual upfront roadshow—but for many buyers and advertisers, the real highlight of the event was Jimmy Kimmel’s annual upfront roast.

Kimmel’s traditional appearance onstage at Lincoln Center, in which he skewers his own company and other broadcasters, is “the best thing in upfront week,” said Disney ad sales chief Rita Ferro, and has been since 2003. (Kimmel talked to Adweek about the tradition—and recalled the upfront joke that ABC wouldn’t let him tell—as part of his 2017 cover story.)

And this year’s virtual event was no exception, as Kimmel pretended to be in his usual spot at Lincoln Center: “Where the fuck is everybody? Oh shit, I forgot to delete this from my iCal.”

Here were Kimmel’s funniest and most cutting jokes from this upfront roadshow, as the Jimmy Kimmel Live host laid into Quibi, Disney streaming chief Kevin Mayer’s surprise exit last month to become TikTok’s CEO and the dire state of Disney—and the rest of the industry—during Covid-19.

On being in an empty Lincoln Center:

“Here I am standing like a fucking fool with nobody watching. I feel like every show on Quibi right now.”

On the upfront roadshow:

“I know that in previous years, many of you thought, there’s no way that ABC upfront could have possibly been worse. And to that I say, Welcome to the Disney Virtual Roadshow! We call it a roadshow because, just like the roadshow on PBS, we are also selling antiques. How is it a roadshow if we’re not going anywhere? Let’s call this what it really is: a cry for help.”

On Kevin Mayer’s departure for TikTok:

“We are a mess. We don’t know who our boss is. Kevin Mayer quit us to go work for Chinese identity thieves. Even our executives are leaving us for a younger audience!”

“What an exciting time to be an ad buyer. At any moment, the president of the United States could claim that drinking your product cures the coronavirus.”

“ABC, our network, in many ways, was very well prepared for this pandemic. Our shows have been social distancing themselves from young people for years. But as you heard earlier, we are back. We are No. 1 in prime entertainment, which is a category we made up while we were locked up at home. We’re No. 1, if you don’t factor in sports … the only thing that anyone watches anymore. And we are also the No. 1 network alphabetically.”

On the Summer Olympics getting postponed to 2021:

“Of course the biggest loser is NBC. Remember last year, how much those dicks kept bragging about the Olympics? This is what you get for being a showoff.”

“Disney+ is thriving. That’s right—our most successful platform is the one you’re not allowed to be on.”

“After we tested Disney-positive, NBC decided to launch their own streaming service, called Peacock. Peacock is, if you’ve ever said, ‘Gee, I can’t find that DVD box set of Frasier my sister bought me for Christmas in 2005. I wish there was a way I could pay for it every month, forever.’ That’s Peacock. Peacock has vowed not to run more than five minutes of advertising per hour—and the advertising community has vowed not to buy more than four minutes of advertising per hour.”

“The old media has some new tricks up our old sleeves. Like advanced advertising, which doesn’t just tell you the age, gender and income level of the viewer you’re trying to reach. It gives you specific insight, like do they own a vacuum? When will they need a new vacuum? What is their address, so we can drive to their house and steal the new vacuum from their porch when it shows up?”

“As far as ROI goes, forget the R. This year, there will be no return on your investment. It’s just one of the sacrifices you’re going to have to make to keep us afloat.”

“It’s a shame we can’t be together to do this in person, but we can’t. There’s a vulnerable population of elderly CBS viewers we have to protect.”

“You want shrimp? Next year, we’ll give you shrimp. But in the meantime, we need cash. Disneyland hasn’t sold a churro in months, and to make up for it, we’re going to ream your asses this year. So give us everything. Take off your pants and shake them upside down.”