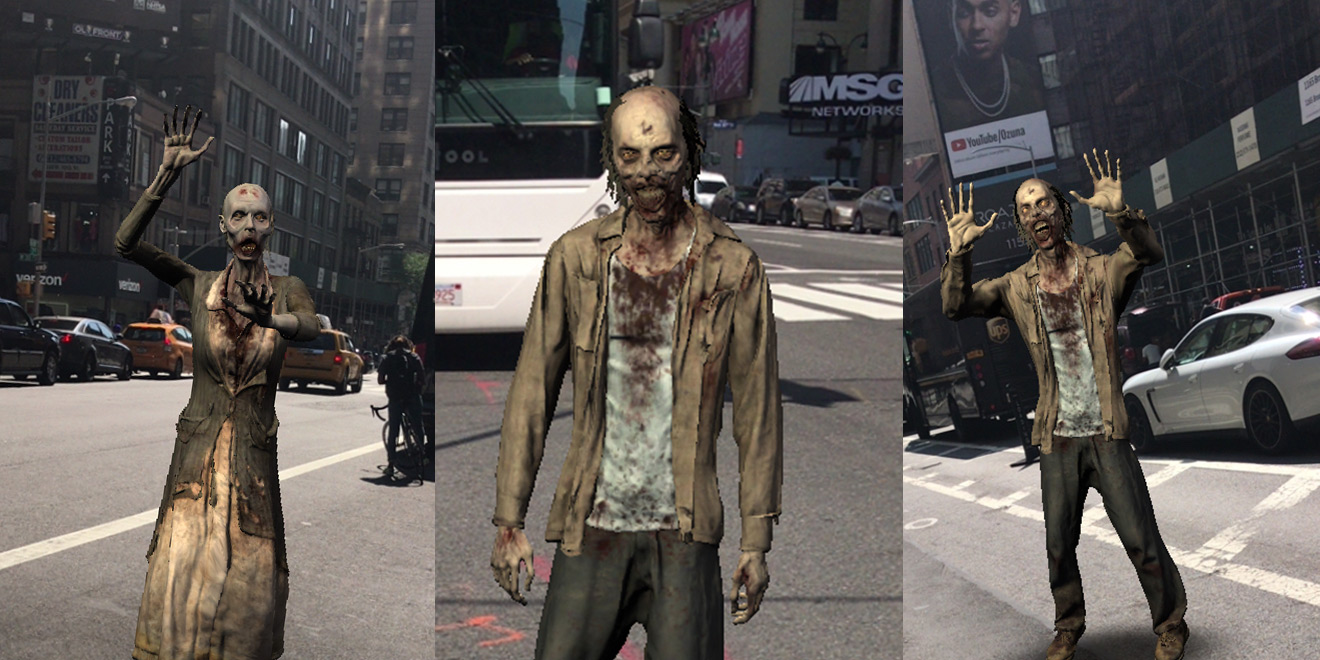 In The Walking Dead Encounter, fans can place walkers in the real world, and share the images and videos via social media. AMC

Walking Dead fans won’t have to wait until the Season 8 premiere on Oct. 22 to get up close and personal with zombie walkers.

AMC and Mountain Dew have teamed up for a new augmented-reality app, The Walking Dead Encounter, which will let users place walkers in the real world, in both still photos and video, and share the AR creations on social media.

The app, which is available today on iOS and Android devices, comes with two walkers. Consumers can unlock additional walkers by watching Mountain Dew commercials during each of the eight episodes in Season 8’s first half or by scanning the Mountain Dew-Walking Dead merchandise in retail locations.

“You’ll get new walkers each week, whatever experience you participate in,” for a total of 20 in all, said Melissa Wasserman, svp of client solutions and integrated marketing at AMC. 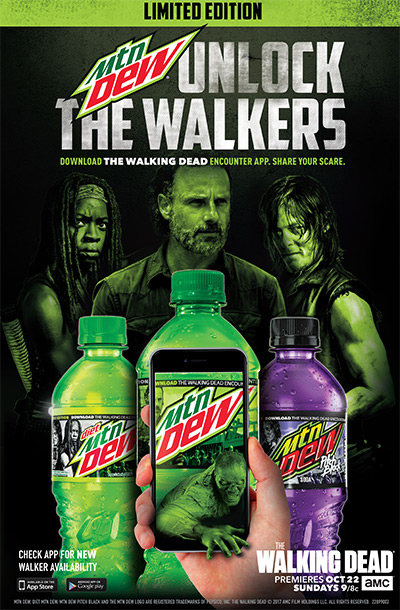 The deal grew out of a request for proposals Mountain Dew’s parent company, PepsiCo, held a year ago with AMC and other TV and digital outlets.

“These two brands align so well, and the fact that we’re eventizing the 100th episode, which is the premiere this year—the stars aligned,” said Scott Collins, president of ad sales for AMC Networks. “This alternative-reality experience just hits the nail on the head from what they were trying to do with their consumers.”

AMC’s digital team came up with the idea for the AR app and worked with an outside firm, Trigger, to develop it.

“Both The Walking Dead and Mountain Dew have extremely engaged fan bases who share very similar passions, so from the conception of this partnership, there was always a very authentic connection that allows our brands to coexist,” said Chauncey Hamlett, senior director of marketing for Mountain Dew. “We’re taking a mobile-first approach because we realized that the one consistent thing between the two moments—whether consumers are watching TV or shopping at retail—is that their phones are in hand.”

AMC and Mountain Dew held a soft launch for the campaign during their “Deadquarters” activation at Comic-Con, where fans could use the app on a few phones and share their images via social media. It generated “a lot of excitement,” said Collins, who added that “people kept walking away with” the prototypes of the Walking Dead-Mountain Dew bottle and can packaging on display.

The companies created three different spots—featuring basketball, skateboard and BMX—which will air throughout the first half of The Walking Dead’s season.

“They all have a heightened factor of, ‘Oh My God, something’s chasing me. What’s going on?’” Wasserman said.“All the Dew-ers are actually playing with the app in the commercial, capturing these moments.”

AMC has previously teamed with Hyundai and Microsoft for The Walking Dead—which remains TV’s No. 1 show among 18- to 49-year-olds—but the Mountain Dew deal is its most elaborate partnership for the show to date.

“It’s a great break from the intensity of the show to have something that’s focused and delivers on the fan enthusiasm,” Collins said. “People are passionately involved in our content, and we feel that this is a great way to capitalize and celebrate and pay off on that enthusiasm and passion that the fans have.”

The Walking Dead Encounter App from Simon Landon on Vimeo.