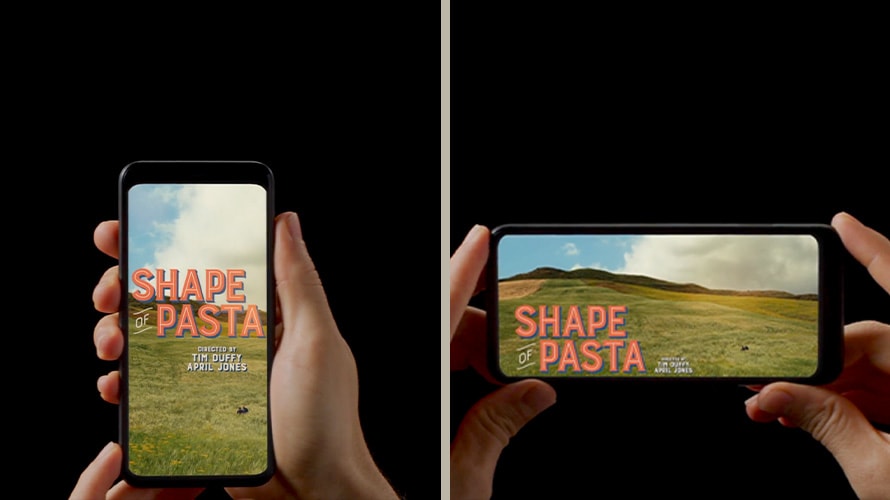 When the short-form streaming service Quibi debuts on April 6, it hopes to look a lot different than other mobile content-consumption options like YouTube or TikTok. The upcoming subscription service will include a feature allowing viewers to watch programming in either landscape mode or portrait mode on their phones—without any unused space on the screen.

The technology, which Quibi founder Jeffrey Katzenberg and CEO Meg Whitman announced at the annual Consumer Electronics Show, is called Turnstyle, and the patent-pending tech is just one way the platform aims to stand out in an increasingly crowded market for streaming entertainment.

“Quibi is big, beautiful and full-screen no matter how you’re holding your phone,” Quibi chief product officer Tom Conrad said at the tech conference. “Hold the phone as you see fit, and the creator’s vision fills the screen just as they intended.”

The tech works by piecing together two videos of the same scene shot in either landscape or portrait mode, or by cropping a very wide piece of footage into two different formats, Conrad told Axios. Different cuts of the video will play depending on the orientation of the mobile device being used to watch the content.

Quibi, which has been in the works since 2018, is intended to provide Hollywood-style short-form programming to a young mobile audience. The service will cost $4.99 a month for an ad-supported version and $7.99 without ads, and Whitman has said previously that she expects about 70% of users will select the cheaper, ad-supported version, which will contain non-skippable preroll ads that will be no more than 15 seconds long.

The company has been able to attract major advertisers including AbInBev, Google, PepsiCo and P&G through its brand-safe and mobile-driven pitch, and in October announced that it had sold out entirely of its first-year ad inventory totaling $150 million.

A number of big-name producers, directors and stars have already signed on to create and appear in episodic content, and the company has just about every genre of television programming planned for the service, including daily news and talk shows from brands like BBC, NBC News and 60 Minutes, reality programs, documentaries, comedy and drama series, and films, which will be released episodically in 7- to 10-minute segments.

Quibi has more than 175 original shows in the works and plans to release 8,500 short episodes in the 12 months after its April launch, the company announced Wednesday. The mobile app for the service will surface recommended content through a feature called Quibi feed.

The company seems set on leveraging the mobile format for unique storytelling opportunities. Director and producer Steven Spielberg is creating a horror series for the service, After Dark, that will only be accessible for viewers after the sun has set in their location, the company previously announced.