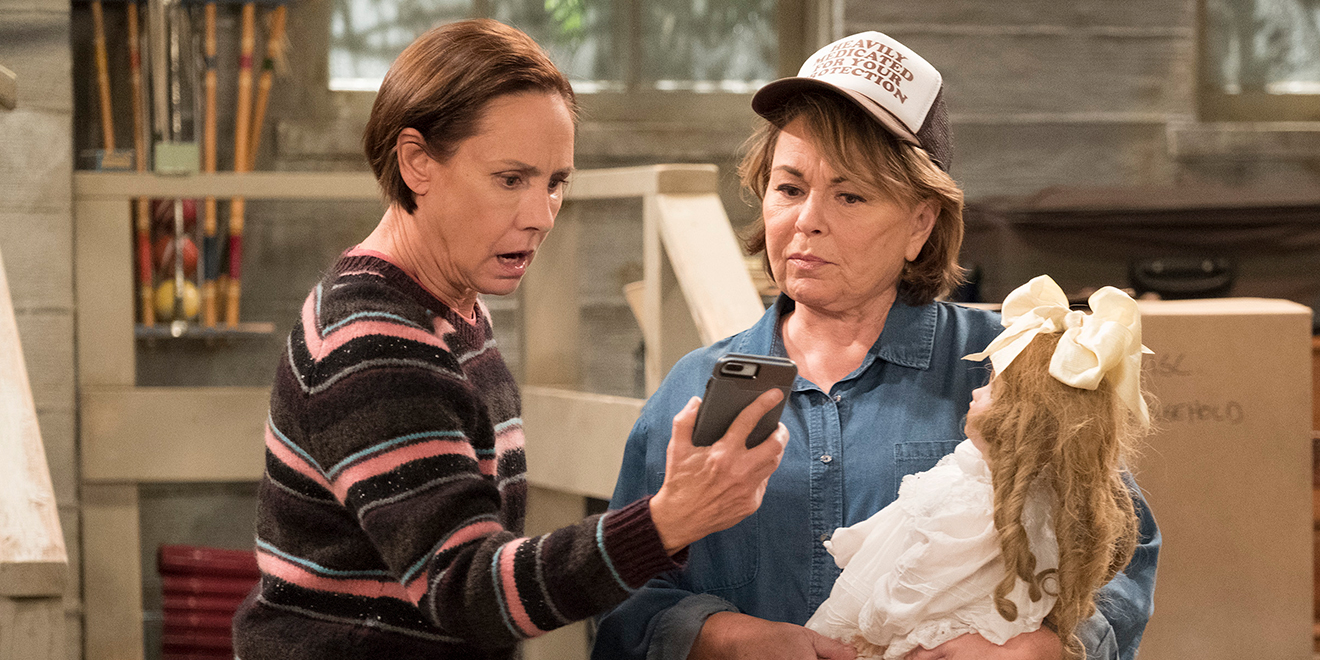 It was a good day when Roseanne Barr woke up on Tuesday morning. The writers room for the next season of her hit revival was starting up, and episodes of Roseanne—both the current and original runs—could be found on ABC (including a repeat episode set to air that night), Paramount Network, CMT, TV Land, Laff and Hulu. By the time she went to bed, after another marathon tweeting session, all of it had evaporated.

Soon after ABC announced the show’s cancellation, Viacom pulled repeats of the original run from Paramount Network, CMT and TV Land, while comedy over-the-air subchannel Laff also took Roseanne off its schedule “for the time being.” Tuesday night, Hulu pulled the revival season from its service. “We support ABC’s decision and are removing the show from Hulu,” said a Hulu spokesperson.

Now, one day after Tuesday’s whirlwind, ABC is trying to pick up the pieces. The network has to rejigger its Tuesday night fall comedy block now that it won’t have Roseanne to kick off the night (ABC said it’s working on a new plan, but doesn’t have a timetable yet for an announcement). But more pressing for ABC is the state of the network’s upfront negotiations, which are already underway—with Roseanne as one of the centerpieces.

Disney-ABC ad sales chief Rita Ferro had been counting on a big upfront haul thanks to robust buyer interest in Roseanne this spring, though buyers told Adweek that while cancelling Roseanne was the right call by the network, it will deal a blow to ABC’s upfront hopes.

The show’s huge debut in March led to a “significant uptick” in pricing and demand for the show during the scatter market, Ferro told Adweek in last week’s cover story on Roseanne. As a result, 30-second spots in Roseanne, which could have been had for $200,000 in last year’s upfront, doubled in the scatter market frenzy, going for as much as $420,000.

Because they are still formulating upfront budgets, buyers said they aren’t yet at the point of needed to reallocate money they had earmarked for Roseanne. But one buyer noted that with no Roseanne and no Scandal (which ended its run last month) in this upfront, it will be tough for ABC to increase its upfront haul this year.

Another buyer noted that the network will be challenged to deliver what it is selling now in the upfront, and Roseanne would have boosted the ratings (and therefore the CPMs of) the other Tuesday night shows like new sitcom The Kids Are Alright, which had been scheduled to air after Roseanne at 8:30 p.m., followed by returning comedies Black-ish and Splitting Up Together.

ABC said Roseanne’s cancellation hasn’t prompted a change in its upfront strategy, and the network will continue to focus on its slate of new and returning series.

As Adweek reported in last week’s cover story, Ferro had lobbied Dungey to schedule the series in the fall, as opposed to holding the show for midseason as the network did this year, to capitalize on the influx of ad dollars this fall as brands clamored for space on the Roseanne bandwagon. And Dungey told Adweek that she had opted to bring Roseanne back at the start of the new season because “we wanted to keep the momentum going and bring strength to our fall launch.”

But even when speaking with Adweek just ahead of ABC’s upfront presentation (which was combined with Freeform for the first time), Ferro stressed that Roseanne wasn’t “the only story” for the company going into this upfront negotiation. “It’s an exciting piece of our overall story. Advertisers are looking for a broad mix of solutions and opportunities. Comedy is one of them but live shows [like American Idol and Dancing With the Stars] is another,” Ferro said.

Still, Ferro told Adweek she had planned on making Roseanne a central part of this year’s upfront talks, where she was going to seek brand integration opportunities for both that show and ABC’s other midseason hit, American Idol. With brands like Uber and Walmart already woven into the show, “that will be a tremendous opportunity for us,” said Ferro, who had also been inspired by seeing John Goodman’s new TV ad campaign for McDonald’s. “I said, ‘This is perfect,’ because we have a huge partnership with McDonald’s around our theatrical.”

It was just two weeks ago that the ABC-Freeform upfront quickly morphed into a full-blown Roseanne lovefest. “If anyone came to play a drinking game based on how many times we mention Roseanne, you’re welcome,” Ben Sherwood, co-chairman of Disney Media Networks and president of Disney-ABC Television Group, told buyers.

And while Disney-ABC execs have long been wary of Barr’s Twitter feed, it was the subject of multiple upfront jokes at New York’s Lincoln Center. When introducing Sherwood, Barr joked that he is “the guy that really writes most of my tweets.”

Then when Sherwood took the stage, he said, “For the record, I have nothing to do with Roseanne’s Twitter account. Take a look at her most recent tweet, it was all her.” He then gestured to a doctored tweet from Barr’s account: “That Ben Sherwood is kind of a more handsome and rugged Ben Affleck with a better back tattoo…” 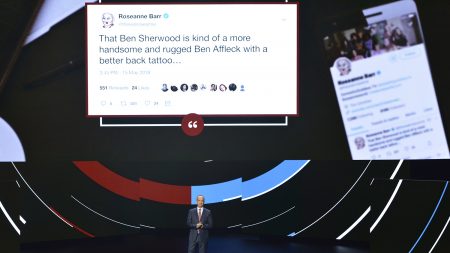 But there was nothing funny about Barr’s feed when she attacked Jarrett, comparing her to the movie Planet of the Apes and the Islamist organization Muslim Brotherhood. In the since-deleted tweet, Barr said of Jarrett, “muslim brotherhood & planet of the apes had a baby=vj.”

After apologizing Tuesday morning, Barr, who didn’t follow the new social media mantra she had explained to Adweek last week (“I’m going to just try to talk about what I’m for, rather than what I’m against.”), claimed that she was leaving Twitter.

However, her hiatus only lasted roughly 11 hours. Last night she returned with a frenetic storm of tweets and retweetings, alternating between apologizing for her earlier tweet (in one, since-deleted tweet, she blamed “ambien tweeting” and, bizarrely, “Memorial Day”), retweeting more conspiracy theories and slamming her co-stars for their statements criticizing what she had tweeted about Jarrett.

It’s a far cry from the wistful tone Barr took just two weeks earlier as she basked in the glow of ABC’s adulation: “I’m just very grateful for ABC’s support for my show. It is a dream come true to have lightning strike twice,” she told Adweek. “You can go home again; it’s a wonderful lesson and a wonderful thing.”

Now the dream has become a nightmare—for everyone involved.