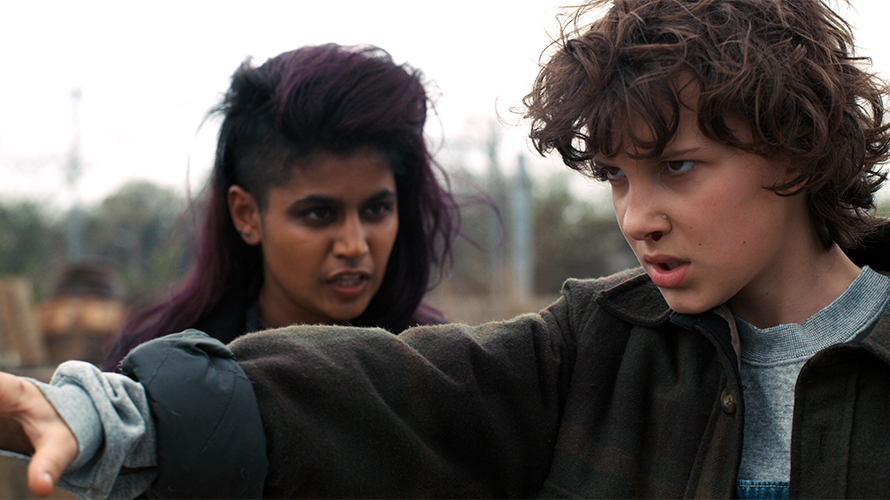 Stranger Things dominated all of Netflix's premieres during the past year. Courtesy Netflix

Nielsen provided new insight this morning about two of the TV industry’s biggest stories over the past year—Netflix’s continued dominance and the gargantuan ratings for Roseanne’s return—during its annual upfronts/NewFronts press briefing in New York.

Nielsen has been gathering data about Netflix viewership for almost a year via its SVOD Content Ratings, a syndicated service that measures content from subscription video on demand services. At present, however, the service only provides ratings for Netflix content on connected TV devices like Roku, Apple TV, video game consoles and smart TVs (which accounts for around 75 percent of SVOD viewing).

For the first time, Nielsen stacked Netflix’s biggest series and movie premieres from over the past year against one another to compare their average audience viewership during the first day. Stranger Things dominated its competition, with three times as much premiere day viewing (almost 25 million, across all Season 2 episodes) as its closest competitor, Marvel’s Defenders. (Again, this data only represents TV viewing during the premiere day, not total ratings to date.) 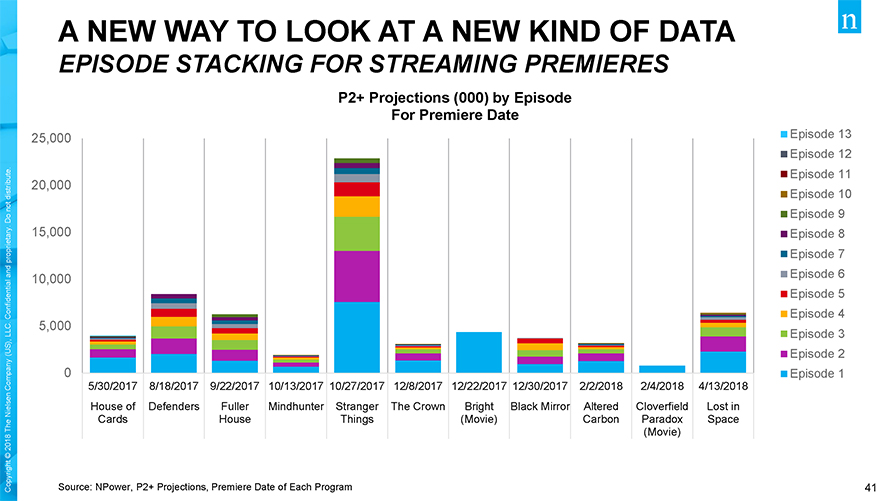 Stranger Things was also the clear leader in reach: 8.9 million people watched at least six minutes of one episode during its premiere day. The Will Smith movie Bright had a premiere day reach of 5.4 million, while The Crown tallied 1.6 million. The Cloverfield Paradox, which Netflix dropped immediately after the Super Bowl, had a 1.0 million reach on its first day of release.

Fuhrer noted that most of Netflix’s biggest debuts during the past year had wildly different audience compositions, more evidence of the streaming service’s efforts to be all things to all people: 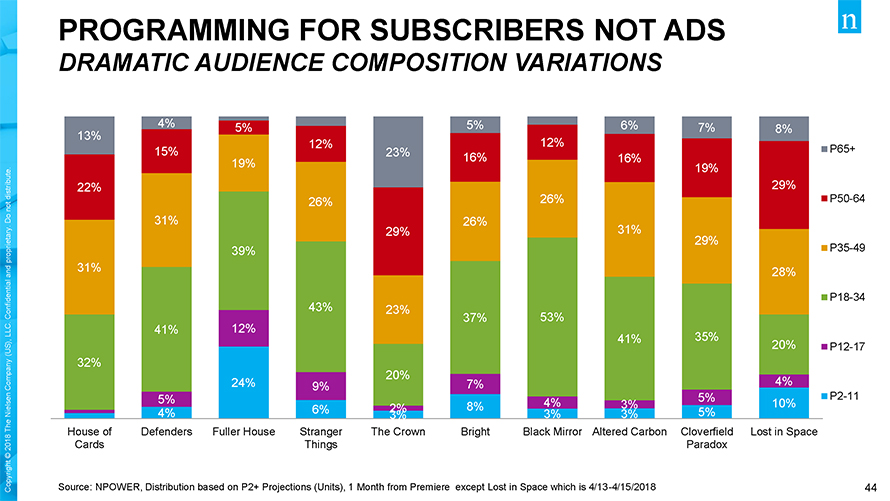 In addition to the SVOD Content Ratings, Fuhrer shared data from the new Nielsen streaming meter, which has been rolled out to 1,000 homes in its existing national TV panel (that panel has 40,000 households in all). “It allows us to understand the connected TV usage we used to miss,” said Fuhrer, who cautioned that the streaming meter data will have “bumps over time” until it expands to more homes.

But the early findings—from Feb. 24 to April 1—show that in OTT-capable homes with an internet connection, 10 percent of the total TV usage is via streaming services. And the video streaming breaks down as follows: 49 percent of it is Netflix viewing, 10 percent is YouTube, 8 percent is Hulu, 6 percent is Amazon and 27 percent is other OTT outlets. 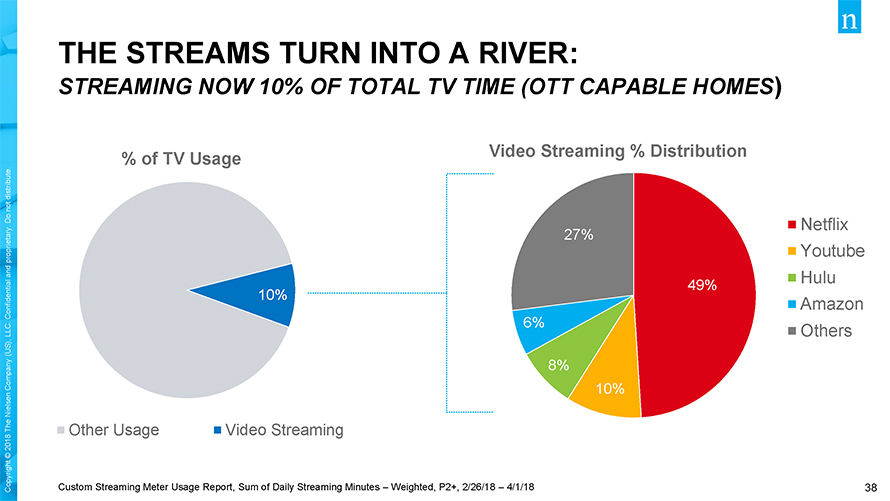 Nielsen provided a deeper dive into Roseanne’s huge premiere ratings, by breaking down ABC’s Total Content Ratings for the show, which include viewership on all platforms.

When the sitcom’s then-series finale aired in 1997, there were no other viewing options other than live TV. That episode had a 8.1 rating in the 18-49 demo.

But Roseanne’s return last month is up to a 10.8 demo rating, according to TCR data compiled through April 8. That breaks down to a 3.1 rating in live viewing, a 4.0 in DVR viewing, a 2.0 in set-top box VOD, a 1.4 in connected-device VOD (the ABC and Hulu apps) and 0.3 in computer and mobile viewing. 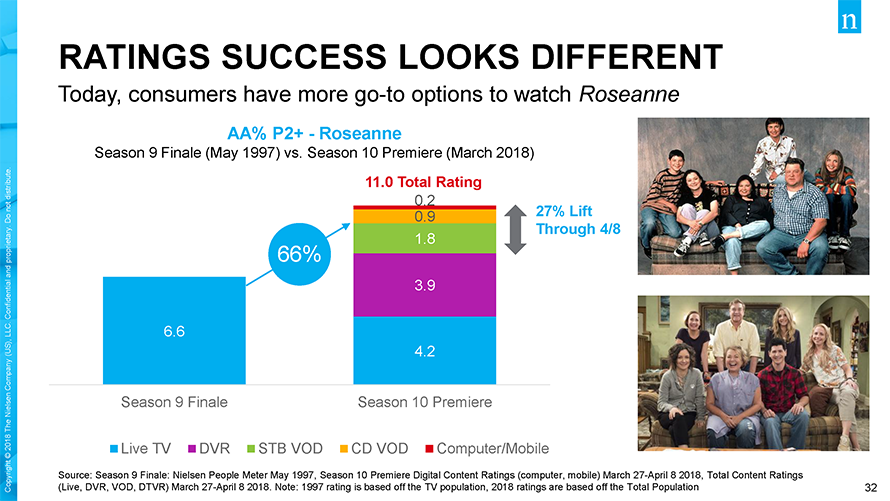 The show’s median age on digital platforms is nearly 20 years younger than those watching the show on live TV, said Jessica Hogue, svp of product leadership at Nielsen. Digital platforms accounted for more than one-third of the viewing among younger demos. 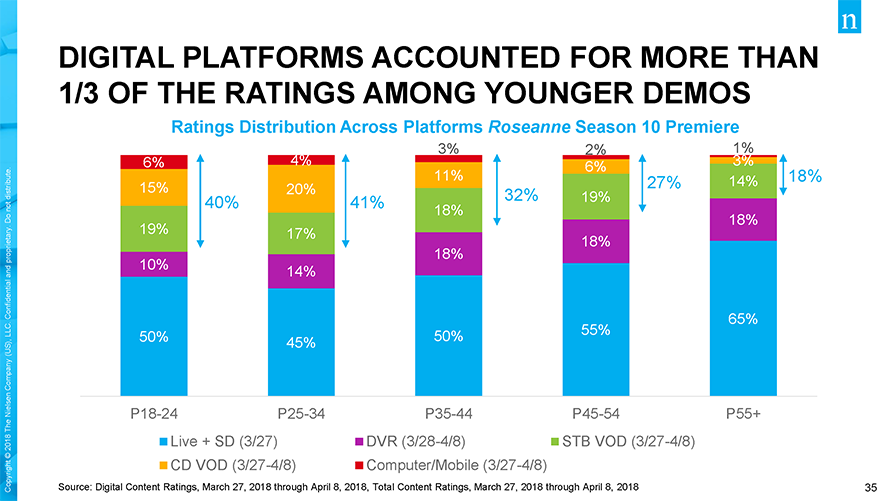 The company also touted the new audience targeting tools it launched earlier this month, Enterprise Audience API, to ensure there are consistent universe estimates being used for custom audience targets.

“It’s critical that advertisers understand the data sets that are being used” for audience targeted buys outside of the standard age and gender demographics, said Kelly Abcarian, svp of product leadership at Nieslen.

She said that audience segment estimates cobbled together from set-top box data, smart TV data and server log data aren’t as accurate as Nielsen’s own TV panel. Abcarian pointed to a hypothetical campaign targeting video game console owners in the U.S. Nielsen knows there are 162 million of them because of its TV panel.

However, the estimate from other targeting data was 135.2 million, which Abcarian said would lead to 33 percent waste in a hypothetical $3 million audience-based ad buy, between higher CPMs (because the client was lead to believe there was a lower reach for the target) and its inability to reach the correct people.