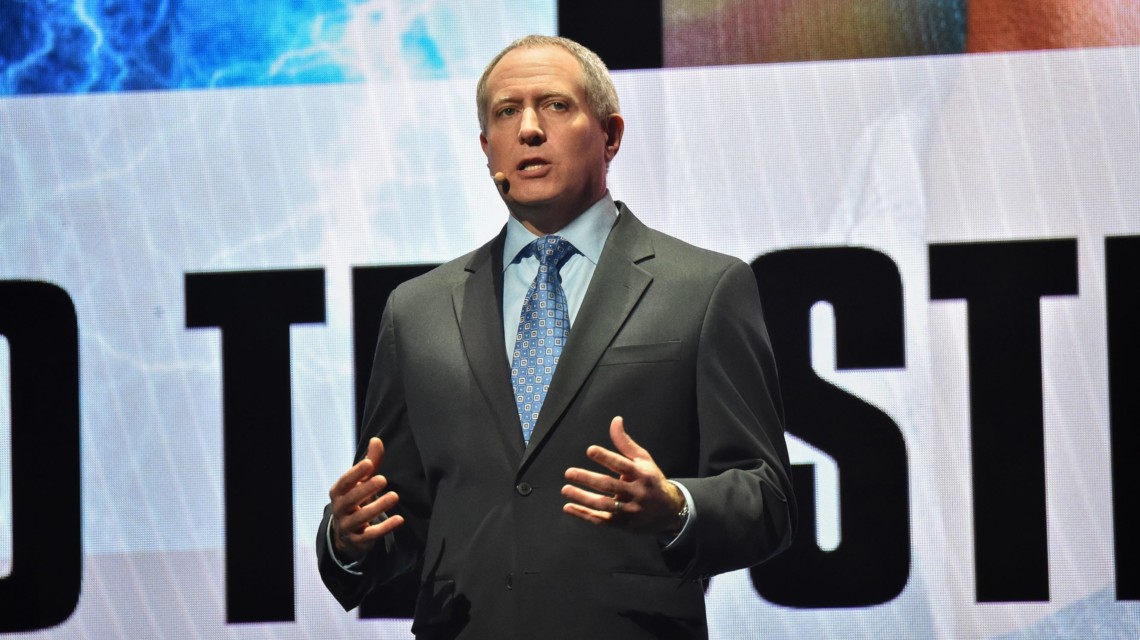 Rob Tuck said The CW's presentation will once again be the shortest one of upfronts week. The CW

As we navigate the most distinct, transformative upfronts week in a decade, Adweek is sitting down with a different ad sales chief each day. Last week, we spoke with Fox’s Marianne Gambelli, Disney’s Rita Ferro, WarnerMedia’s Donna Speciale and CBS’ Jo Ann Ross, and yesterday we interviewed NBCUniversal’s Mark Marshall and Laura Molen. Our final ad sales chief Q&A is with The CW’s Rob Tuck, whose network will close out upfront week on Thursday morning.

Tuck, who has been evp, national sales for the network since 2008 (and back in 1995 started at The WB, which later merged with UPN to create The CW), has a smoother upfront path than many of his peers. The CW will be the only company that did not whether a major change—a merger, spinoff, new CEO, new network president or new ad sales chief—over the past year.

Ahead of Thursday’s event, Tuck spoke with Adweek about the benefits of stability, upfront plans for the final seasons of Supernatural and Arrow and whether changes at The CW’s two parent companies has affected the network’s strategy for this year’s marketplace.

Adweek: You are pretty much the only ones this upfront week who didn’t just go through a merger or spinoff or has a new boss.
Rob Tuck: That’s good, right?

Will that stability be part of your upfront pitch this year?
It will be, because our message and everything we’re taking out to the market and doing in the market is stable. It’s a game plan that has worked for us, and we’re going to stay with it. We know this network has been very fortunate to have a really clear brand identity. We always hear back from our advertisers and clients, “Yeah, we know your shows. That’s a CW show.” We know our brand, and I think that’s important given everything that’s going on out in the world. There’s a lot of options out there, a lot of SVOD options, and I think this brand identity now is going to be really important and give us an edge out there.

A decade ago, we rolled out convergence, which was really the start of our multiplatform offering, because we saw our audience going onto the digital platforms. The early part of convergence really was just desktop and some mobile. Today, we’re still doing convergence, we still put the advertiser front and center, they’ve always been front and center in all the development and the integration of it, but now we’ve rolled out into OTT platforms, vMVPDs and then whatever else may come that we have yet to see. The goal for us has always been, we know what the advertiser is going to require from us, and we don’t go on to the platform until we’re able to make a turnkey for them. So they’ve been front and center of that initiative from day one, because I know from the get-go, I never would have got it sold-in if we didn’t do it that way.

Another thing that has been stable is the length of your presentation. You guys keep it pretty short …
You’re going to hear me say that!

… which buyers will particularly appreciate during a week where some of those events could be getting even longer.
We’ve got a set amount of time, I know. There’s no doubt they’ll be on the edge of their seat. Mark [Pedowitz, The CW’s president] and I know the clock is ticking as soon as the music comes on, and we will keep it tight. Our message is really clear, and it’s not going to change much. The shows speak for themselves; the multiplatform offering works for everybody out there. I would say it’s the best in the business, because it keeps the advertiser always involved in it, and they get to get their message across on every single one of these platforms and speak to the consumer, wherever the consumer is watching, and the consumer gets to watch it whenever and wherever they want to watch.

The more real estate we can have in the game, the better off we are.
@jasonlynch jason.lynch@adweek.com Jason Lynch is TV/Media Editor at Adweek, overseeing trends, technology, personalities and programming across broadcast, cable and streaming video.