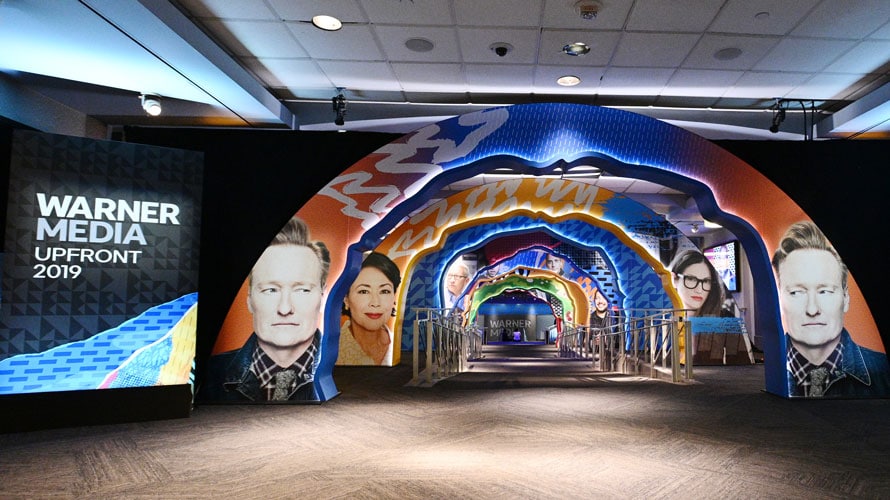 WarnerMedia showed off its slate of new and returning programming and new ad opportunities. Getty Images

WarnerMedia touted a bigger-than-ever programming portfolio, new data-driven capabilities and the “new company” it is hoping to evolve into during its upfront presentation Wednesday morning.

The event at the Hulu Theater at Madison Square Garden gave plenty of attention to the company’s deep programming slate and pointed to all of its new capabilities borne out of AT&T’s $85 billion acquisition of Time Warner and a subsequent restructuring, which has bolstered the company’s programming portfolio and added to its data capabilities.

“You’ll see some familiar faces on stage today, but make no mistake, we are a new company—new resources, new ambitions and a new approach to the market,” WarnerMedia CEO John Stankey told a packed audience of advertisers, agencies, marketers and press.

The company, however, doesn’t want advertisers to think it’s too big or too complicated to work with. Stankey and WarnerMedia’s ad sales chief Donna Speciale, promised data-driven ad decisions, guaranteed business results and a streamlined and unified advertising offering across its slate of new and returning programming as part of the company’s acquisition, renaming and restructure.

Fox Corp. on Monday tried to set itself apart by saying its competitors were growing more complicated while it was, in contrast, slimming down. On Wednesday, WarnerMedia promised partners a simplified buying process.

“In this chaotic industry, we are simplified,” Speciale told attendees. “All of WarnerMedia’s sales and partnerships are unified. Today, you can have one holistic conversation about all of our content across all of our platforms.” (She elaborated on those thoughts last week in an interview with Adweek.)

WarnerMedia’s presentation was light on granular details about the kind of data capabilities it could offer, other than pointing to AT&T’s set-top box data, its roster of mobile phone clients and nodding to Xandr, AT&T’s ads and analytics division. That could be due to Xandr’s own unconventional upfront presentation Tuesday morning during which the division laid out details of its premium video marketplace, Community, and a community ad exchange.

“These are not visions for the future,” Speciale said after clips promoting those partnerships and their results. “This is today. These are measurable business outcomes that are real and that you’re missing out on if you’re not planning and buying and partnering differently.”

The presentation moved quickly, especially compared to Disney’s nearly two-and-a-half hour Tuesday afternoon presentation, and much of the show relied on fast-paced sizzle reels to nod to the company’s slate of new programming and popular returning series. Much of the presentation’s 78-minute runtime was devoted to some of the company’s biggest and most well-loved stars, which included comedians Conan O’Brien, James Veitch and Tracy Morgan, all of whom kept attendees laughing.

O’Brien, who was the first comedian to take the stage, called the upfronts “the Oscars for people who love Power Point” and made some digs at WarnerMedia’s new parent company. (“Because this is AT&T, after the show there will be a terrible reception,” he quipped.)

The animated versions of Rick and Morty, from the blockbuster Adult Swim animated show of the same name, even made an on-screen appearance, announcing the show’s fourth season return in November and yelling “get your ad spots” before flipping the bird and flinging profanities at the audience.

Several major news anchors from CNN, including Anderson Cooper, Don Lemon, Erin Burnett, Wolf Blitzer, Jake Tapper and Chris Cuomo, made on-stage appearances during a segment promoting CNN and its journalists’ “search for the truth.” Their appearance elicited cheers and whoops from some attendees.

Kevin Reilly, WarnerMedia’s chief creative officer and president of TBS and TNT, introduced returning and new series for TruTV, TNT and TBS, which will include another drama series, Snowpiercer (based on the graphic novel La Transperceneige and the 2013 film) on the traditionally comedy-centric cable net TBS. Daveed Diggs, the co-star of the upcoming drama, capped off the presentation with a rap performance for the audience, which also included cameos from other WarnerMedia talent like Niecy Nash, Shaquille O’Neal and Daniel Radcliffe.

On TNT, the company is bringing two live franchises to air, including a live wrestling program, All Elite Wrestling, and a live medical-mystery series helped by Ann Curry called Chase the Cure Live (which will also be simulcast on TNT), during which medical professionals and viewers will crowd-source the possible reason for different ailments.

The company is also delving into shoppable television with a new unscripted series starring former J.Crew president Jenna Lyons, The Jenna Lyons Project. That show, which will follow Lyons and her team as they build a business, will translate to shoppable clothing, home goods and beauty products for sale online and on social, Reilly said.

WarnerMedia’s yet-to-be-named streaming service was mentioned several times throughout the presentation, but any specifics about the service other than its early 2020 debut were absent. Reilly said the service would include both an ad-supported and subscription-only options, and laid out the service’s goals to include “long-term value creation,” “cultural impact” and an “integrated approach” to the ecosystem by leveraging linear television and streaming opportunities alongside targeting capabilities.

Nonetheless, Speciale made the appeal to advertisers to invest in the steaming service once it aired, saying that the service would complete WarnerMedia’s “engagement loop across streaming, linear and digital.”

“Make no mistake, linear is critical to your media mix,” Speciale said near the end of the presentation. “But today the best way, or should I say the only way to reach our fans—your consumers—is to advertise on all our platforms with us.”