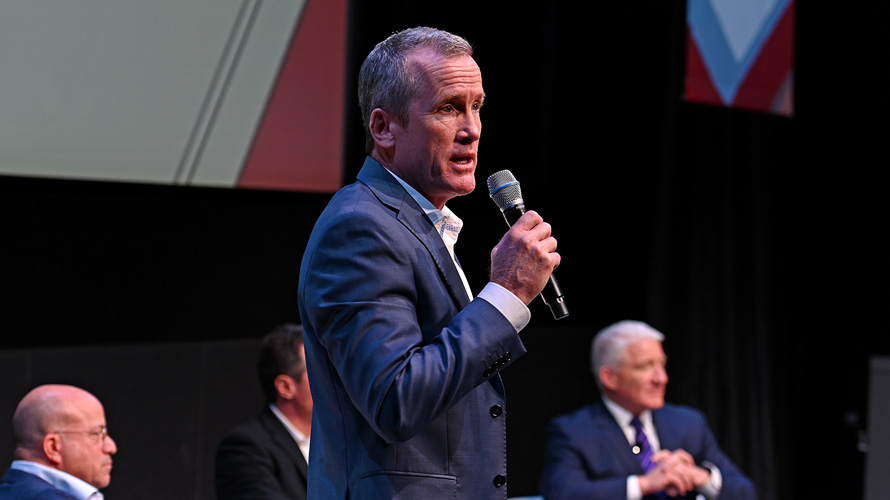 Joe Hogan said he is focused on "what is the most immediate need for our agency and client partners." Getty Images

WarnerMedia knew this year’s upfront would be very different for the company. It would be engaging in talks jointly alongside corporate sibling Xandr, and this would be its first marketplace since 2012 without longtime ad sales chief Donna Speciale at the helm—but it wasn’t expecting quite this much upheaval.

Due to Covid-19, WarnerMedia won’t be holding its combined event with Xandr next Wednesday—and isn’t planning on producing any major presentation at all, even in virtual form. Instead, WarnerMedia is preparing for a “flexible” upfront marketplace, according to Joe Hogan, evp of sales and marketing.

The company will be working more closely than ever with Xandr, after AT&T consolidated its ad sales units last week by moving the ad-tech company into WarnerMedia. Now both divisions are overseen by Gerhard Zeiler, chief revenue officer at WarnerMedia and president of WarnerMedia International, who has been in his current position since March 2019.

While the two companies remain separate, Hogan and Xandr’s chief business officer Kirk McDonald are heading into the upfront jointly, and in fact are now handling all advertising business—both upfront and scatter—together.

“We’re taking on every piece of business that comes in,” said Hogan, “and we’re looking at our total portfolio of opportunities and solutions and making sure that we’re really allowing the client to see the full breadth of our portfolio.”

Hogan said his company’s relationship with Xandr isn’t changing much as a result of last week’s move, given that “we have been aligned for quite some time,” working account by account and agency by agency. “So we’re well aligned as to who’s who and what the products are, and how we take those products as solutions to the market to advertisers and our agency partners.”

The two companies participated in two full days of joint strategy and planning sessions in early March, right before the pandemic hit and shortly before Hogan held the CNN Experience event for advertisers—which ended up being this year’s only in-person upfront presentation.

“We can really help put the solutions all together in one conversation,” Hogan said. “Our agency and client partners have been very enthusiastic for our approach.”

The companies won’t be holding their original event, which had been set for May 13 at New York’s Hulu Theater at MSG. And while some other media companies are streaming a virtual event in lieu of the in-person presentation—including ViacomCBS, which announced its revised event plans on Tuesday—WarnerMedia doesn’t plan on following suit, despite initially announcing plans to hold a digital-only event.

“Never say never in very uncertain times, but I don’t think you’ll see us doing anything that would resemble what we would call a more historical approach this year,” Hogan said.

Like most media companies, Hogan is preparing for an upfront marketplace that will operate on a staggered timetable, with buyers entering negotiations whenever their clients are ready to think about their long-term spend.

Some clients are having more conversations about addressable advertising and how that could help them as they emerge from the pandemic; others are looking for creative solutions to help strike the right tone, while others are seeking Xandr’s data and insights. “It really is just helping one client and agency partner at a time find good solutions for them to operate in these uncertain times, with a voice and a story that’s appropriate for their brand,” Hogan said.

Like many big media companies, WarnerMedia has already been hit hard by the pandemic. During its earnings release last month, AT&T said the cancellation of March Madness and NBA games in March led to a 24.1% year-over-year quarterly decline in advertising revenue on the Turner side—from $1.26 billion in 2019 to $957 million in 2020. And many TV ad sales execs worry that the biggest Covid-19 revenue losses are still to come.

While some advertisers are steering clear of news and Covid-19 related content, WarnerMedia has seen “increased demand” across CNN’s linear and digital platforms, Hogan said. “We’re seeing more advertisers wanting to be part of that spot, whether it be linear or digital, where people are getting their news and information at enormous scale.”

There’s also been demand among the company’s entertainment networks, where “people are finding comfort in our content,” said Hogan, who has been putting together several integrations during the pandemic.

WarnerMedia worked with Little Caesars on the brand’s first on-air integration with Conan O’Brien for his first Conan at Home broadcast that aired in late March, showcasing the brand’s no-contact delivery service. That integration was produced within just 72 hours.

Also, Target sponsored a five-episode Friends marathon with limited ads on Saturday, April 18. Parent company AT&T was the sole sponsor of Sesame Street: Elmo’s Playdate, which enabled it to air ad-free across the company’s cable networks on April 14.

On the heels of Rick and Morty’s appearance in a Pringles Super Bowl ad, WarnerMedia also arranged for the animated duo to appear in a spot for Wendy’s, which is a full-season sponsor of the Adult Swim show’s latest season.

Still, there’s no ad revenue substitute for live sports, and Hogan is eagerly awaiting The Match: Champions for Charity, airing on TNT later this month. Tiger Woods, Phil Mickelson, Peyton Manning and Tom Brady will be facing off in the two-on-two live golf competition, which will raise money for Covid-19 relief. “There’s a lot of pent up demand for live sports,” he said.

Hogan has been heading up WarnerMedia ad sales, reporting to Zeiler, since Speciale’s exit last July. Her position has never technically been filled, and Hogan said he had no “insight” on whether he’ll be tapped as her permanent successor.

“I’ve honestly been focused on what we need to do now and how we need to work with advertisers on a wide variety of things in wildly disrupted not only timing, but wildly disrupted states of viability,” he said. “We’re listening and leaning into what our advertisers need to solve today and tomorrow, and perhaps maybe in the next week or next month. We’re not rooted in anything else.”

One frequent topic of conversation with clients: upcoming streaming service HBO Max. It rolls out on May 27 as an SVOD offering, with an ad-supported version following next year. “There’s a lot of interest from our agency partners and advertisers,” said Hogan, but “it’s still a whole bunch of months away.”