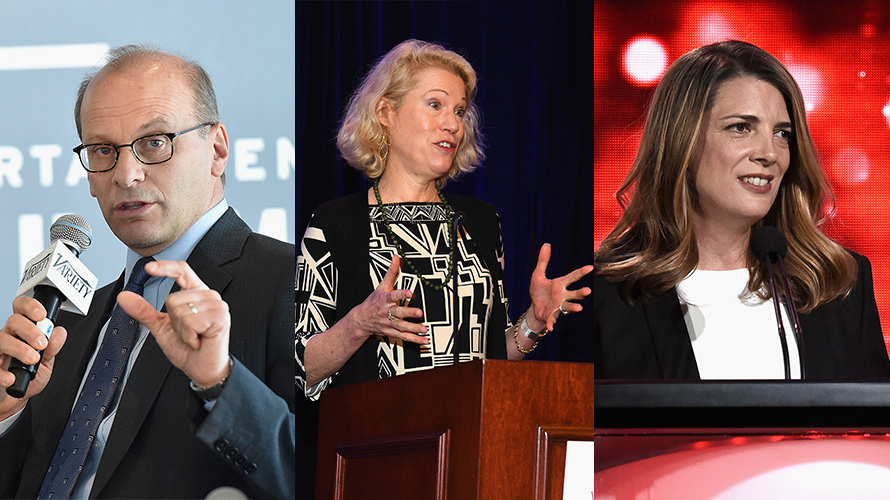 Jon Steinlauf, Kathleen Finch and Nancy Daniels are expected to present at all seven of Discovery's upfront events.

Less than a week after Discovery Communications finalized its acquisition of Scripps Networks Interactive, the combined company has unveiled an upfront strategy in which it will be going to market as a unified ad sales team.

Kathleen Finch, who had been chief programming, content and brand officer for the six Scripps networks and is now chief lifestyle brands officer for Discovery, Inc., will present with Steinlauf at all seven events, along with a senior exec from the Discovery side, most likely Nancy Daniels, who is now chief brand officer, Discovery and Factual.

David Zaslav, president and CEO, will attend the New York event and perhaps other cities as well, and talent from across the combined portfolio will appear at each of the presentations.

The upfront’s theme is “Advertising Works Here,” an idea from Steinlauf about how the network is able to “reach quality audiences live,” said said Laura Galietta, svp, ad sales marketing and branded entertainment for the combined Discovery. “Because of all the time shifting with scripted, we are a very important piece to the puzzle to reach those quality audiences.”

Galietta said 97 percent of the combined portfolio’s programming is watched live-same-day. Discovery, Inc. also ranks as the most upscale cable network group and has a 96 percent advantage in ad engagement compared with sports, news and entertainment programming on its competitors.

In its upfront presentations, Discovery, Inc. plans to look beyond Discovery and Scripps’ key advertiser categories of home, food and travel and attract more interest from auto, lifestyle and adventure brands.

During the seven months between when Discovery first announced its $14.6 billion acquisition of Scripps and when the deal officially closed last Tuesday, Steinlauf had to proceed as if Scripps would be holding its usual upfront this year.

“Because of regulatory policies, there was no communication between employees of Discovery and Scripps. We were going ahead, business as usual, not knowing when the deal would close,” Steinlauf said, pointing to delays that have held up the the AT&T-Time Warner and Sinclair-Tribune mergers.

But at the same time, the Scripps team had worked on a strategy that incorporated Discovery’s network, in case the deal closed during the upfront tour, because “we knew we would need to change out a lot of material so that it was more balanced, and more reflective of the larger company,” Steinlauf said.

To that end, Galietta said, the Scripps team had built a presentation that would focus on the combined company’s eight “priority” networks: Food Network, HGTV, Travel Channel, Discovery, Animal Planet, OWN, ID and TLC.

“We have a lot of very solid, second-tier channels, but we want to keep this down to an hour or an hour and 10 [minutes], so there’s a limit to what you can do,” Steinlauf said.

Their months of contingency planning paid off when the deal closed last week, and the Discovery and Scripps teams met for seven hours on Wednesday to determine how the ad sales teams would combine and how they would approach the upfront.

Steinlauf opted for Scripps’ event-focused upfront strategy over the quieter approach of Discovery, which had scrapped its pricey upfront spectacle in 2015 to pitch buyers in a more intimate setting.

“We had these dates booked,” he said of the events Scripps had planned for the seven cities. “Discovery hasn’t done quite what we’ve done in a while.”

The Scripps team had their final dress rehearsal in New York on Thursday for the presentation they had been working on (featuring the key message points for the combined company) and invited both ad sales teams to view it and get to know one another.

Now, the combined team is working feverishly to integrate talent and research from both companies into the event. “There’s a lot of work going on, and hopefully by the time we get to Detroit on [March 20], it will be a balanced presentation that represents both companies well,” Steinlauf said.

On March 1, as the Discovery-Scripps deal neared the finish line, Discovery shook up its management team, putting key Scripps execs in charge of the combined company as it unveiled its new leadership structure.

While the new Discovery, Inc. has an upfront strategy, Steinlauf isn’t ready to reveal the structure of the combined ad sales team, or exactly how Discovery’s president of U.S. ad sales Ben Price—who now reports to him—will fit into it.

“I’m going to partner with Ben to understand the sales strategy and positioning for those channels so that we can connect and combine the strengths of the organization as a whole,” Steinlauf said.

As of now, however, “we are one company, one sales organization, and we are going to try as best as can to collaborate in the scatter markets,” Steinlauf said. “We’re targeting the ’18-’19 upfront as the first rollout of the fully integrated ad sales organization, covering all of the channels and all of the digital.”

The new Discovery, Inc. controls close to 20 percent of the country’s ad-supported cable and satellite viewership, and five of the top cable networks watched most by women.