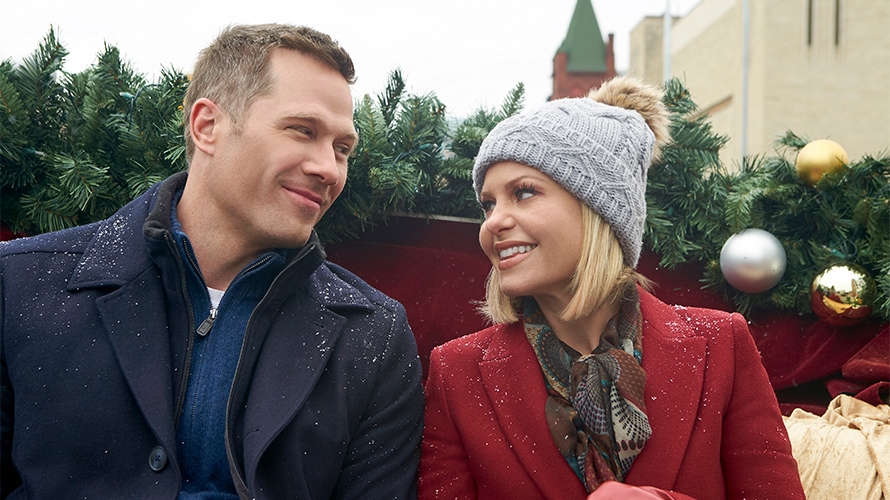 Holiday movies like A Shoe Addict's Christmas made Hallmark Channel the No. 1 cable network among women in the fourth quarter. Crown Media Family Networks

However, that mantra was briefly jettisoned a year ago, when a snowstorm blanketed the northeast and forced Crown Media to cancel its annual upfront event at New York’s Rainbow Room. Instead, CEO Bill Abbott, Georger and Hallmark movie mainstays Candace Cameron Bure and Danica McKellar appeared in a Facebook Live stream from Central Park.

Mother Nature cooperated this year, and the Crown Media team returned to the Rainbow Room Thursday night for a Hallmark upfront event that was more of “a celebration” than a presentation, said Georger.

“It’s good to be back in the iconic Rainbow Room and doing things in a more traditional way,” he said. “I’m not that disappointed that I won’t be out in the elements wearing a reindeer costume.”

Whether celebration or presentation, the event, hosted by Abbott and featuring appearances from several of Hallmark’s on-air talent, eschewed typical upfront programming announcements in favor of spotlighting the continued success of Hallmark Channel and sister network Hallmark Movies & Mysteries.

On the strength of its annual round-the-clock, two-month holiday movie marathon, Countdown to Christmas, Hallmark Channel was the most-watched cable network in the fourth quarter of 2018 among women 25-54 and women 18-49. “It’s working and we’re proud of it,” Georger said of the brand, which is enjoying ratings growth while many competitors’ ratings are falling, leading them to “artificially raise prices for the wrong reasons.”

Some rivals “have lost their brand identity while Hallmark has retained and actually built ours. Some of them have relied on one or two shows instead of creating a more comprehensive viewing experience,” as Hallmark has, he added.

Georger and Abbott also highlighted the durability of the Hallmark brand, which has been around for more than a century, the stability of network leadership—the duo is starting its 20th year together at the company—and the continuity of the network’s brand, while many other networks “have either rebranded or relaunched or been bought by someone else,” Georger said.

Countdown to Christmas, which celebrates its 10th anniversary this year, has continued to attract audiences even as holiday TV became one of cable’s biggest battlegrounds last year. And the company has expanded that seasonal strategy throughout the year to include Valentine’s Day, back to school, summer nights and June weddings.

“Like so many of our events, these aren’t experiments that are one-offs,” Georger said. “Reliability around holiday and these other seasonal events are important and you can count on them.”

And as brand safety continues to be a huge concern for marketers, “we offer a safe haven and we offer an opportunity to erase any concerns that brands have about their environment,” he said.

That was one of the reasons the company cut ties last week with Lori Loughlin, who starred in When Calls the Heart, a number of Countdown to Christmas holiday movies and several Garage Sale Mysteries movies on Hallmark Movies & Mysteries, after she was arrested and charged in connection with an extensive nationwide college admissions cheating scandal.

Hallmark made “no major changes” to the upfront event as a result of its Loughlin decision, Georger said, adding that the actress hadn’t been scheduled to attend the Rainbow Room event.

The company’s third linear network, Hallmark Drama, “won’t be a key focus for this year’s upfront” given that it is only available in 15 million homes,” Georger said. But the upstart network’s “early strength” gives him confidence it will be a significant part of next year’s upfront pitch.