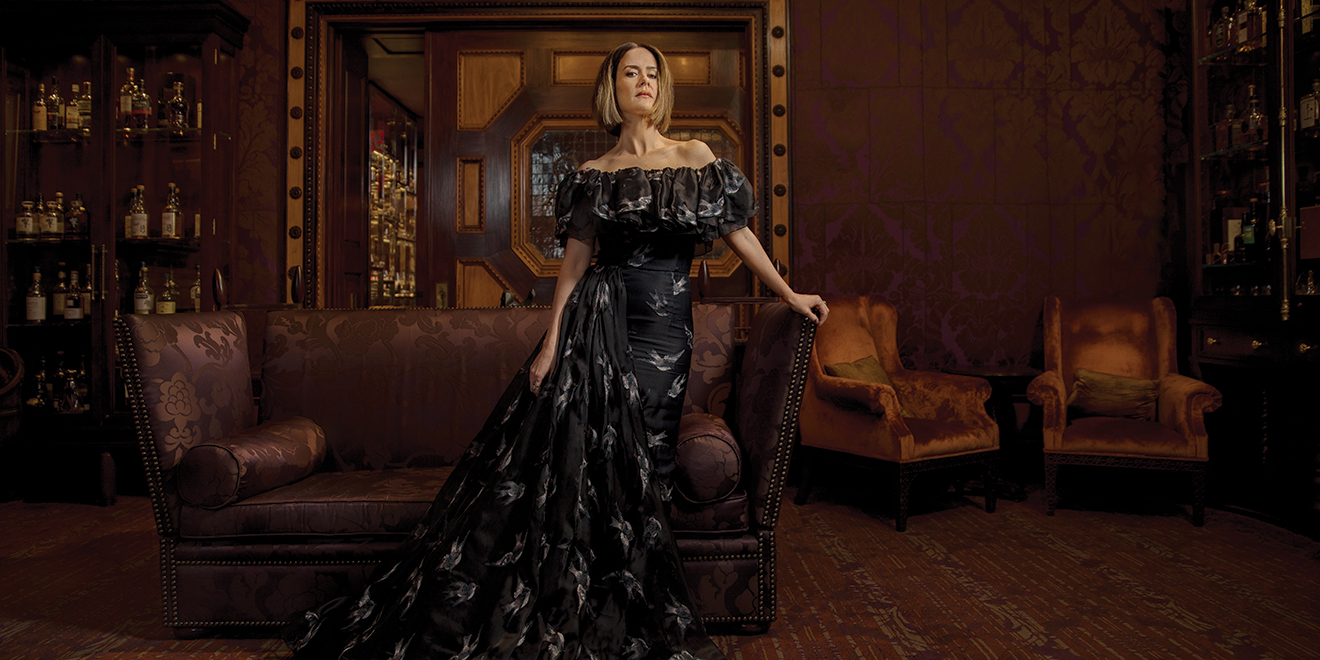 Sarah Paulson won an Emmy, SAG Award and Golden Globe for her performance as Marcia Clark. Photographed in Rarities at Lotte New York Palace by Sasha Maslov for Adweek.

She won an Emmy, SAG Award and Golden Globe for her bravura performance as Marcia Clark in last year’s FX miniseries, The People v. O.J. Simpson: American Crime Story, but it took Sarah Paulson almost another year to confirm what the TV industry really thinks about her acting chops. Earlier this year, her longtime collaborator and O.J. executive producer Ryan Murphy offered the actress the lead in Ratched, an origin story he is executive producing that focuses on Nurse Ratched, the iconic, sadistic nurse from the 1975 film One Flew Over the Cuckoo’s Nest. Murphy shopped the project around to networks, offering a package for the first time that included his frequent muse Paulson attached as star and producer.

“That was very exciting and also very scary, because I thought, oh God, what if they take this out, and people are like, ‘No thanks, we’re good. We don’t need a Sarah Paulson show,’” says Paulson. “Thankfully, it all worked out very well.”

In the wake of last year’s most acclaimed TV performance, everyone—TV networks and movie studios alike—wants to be in business with Paulson. Ratched sparked a high-stakes bidding war, with Netflix ultimately fending off suitors like Hulu and Apple (which is developing an original TV series strategy) for the project last month, giving the drama a hefty two-season commitment. And that is only one of three high-profile TV series that Paulson will film over the next year. In 2018, she’ll begin production on Katrina, the third installment in Murphy’s American Crime Story anthology series for FX, and continue on the other Murphy FX anthology hit that started her meteoric rise, American Horror Story.

This year’s AHS installment, Cult, debuted last month to an audience of 6.9 million viewers, and ranks as the year’s No. 3 most-watched scripted cable series in total viewers and the 18-49 and 18-34 demos, behind only The Walking Dead and Game of Thrones. She’ll be back for Season 8 next year, while also appearing in a trio of major movies: Ocean’s Eight (an all-female spinoff to the Ocean’s Eleven trilogy due out next June, co-starring Sandra Bullock and Anne Hathaway), The Post (a Steven Spielberg-directed drama due out in December, about the Washington Post’s decision to publish the Pentagon Papers in 1971) and Glass (M. Night Shyamalan’s sequel to both Split and 2000’s Unbreakable).

It’s a slate of meaty TV and film projects that any actor would envy. “Feeling a little bit of the incredible excitement and joy she’s experienced—having her artistry and talent recognized—has been really wonderful,” says FX Networks CEO John Landgraf of Paulson, who has become one of his network’s MVPs. “It’s been fun watching her dreams come true.”

When Paulson first crossed paths with Murphy in 2004, guest-starring on a Season 2 episode of his plastic surgery drama Nip/Tuck as a woman who claimed to have stigmata, “I didn’t know that was going to lead to my world spinning on the Ryan Murphy axis,” she says. Neither did the prolific creator. He later cast the actress in a 2008 FX pilot that didn’t get picked up, but then lost touch with her, until Jessica Lange intervened on her behalf while filming American Horror Story’s first season in 2011. Lange, who starred in The Glass Menagerie on Broadway with Paulson in 2005, had been spending time with her former co-star after she moved to Los Angeles during filming.

“L.A. is really not her town, so she was glad I was there,” recalls Paulson, who tagged along with Lange to an event honoring one of Murphy’s employees. “It was the first time I had seen Ryan in many years. Jessica threw her arm around me, looked at Ryan and said, ‘Can’t you find something for Sarah to do on the show? It would be so great. I just like having her around.’” Murphy, who was writing an episode featuring psychic Billie Dean Howard, obliged and gave Paulson the part. After her three-episode arc, Murphy took her out to dinner and offered her a long-term deal to continue with the show. “I was like, ‘Based on what?’” says Paulson. “I didn’t know why he was motivated to do that, but he did. Then I played Lana Winters, and the rest is history.”

Her turn in Asylum the following year as Winters, a lesbian journalist institutionalized in 1964 for being gay, is what first caused Landgraf to take notice of Paulson’s star power. “She was the most important character in the piece. It took her from a young woman to an older woman, and she was unbelievable,” he says. “We always knew she was great, but her ability to carry things and put them on her shoulder became evident. And she’s knocked it out of the park over and over again. She’s become a major star.”

Murphy kept presenting Paulson with new challenges each year, as American Horror Story rebooted annually with a new premise and characters. The actress played a blind witch in Coven, conjoined twins in Freak Show and a drug addict in Hotel. “There is something so incredibly potent about knowing that every year, you have no idea what you’re going to get to do,” Paulson says.

That’s the case again with her Cult character, Ally, who hits uncomfortably close to home. She has become unmoored by the results of November’s presidential election, which triggers several of her phobias—many of them shared by Paulson in real life, including trypophobia, the fear of hole clusters in things like sponges and coral reefs. “I can’t even talk about it, it makes me so upset. I have a terrible fear of bees and honeycombs, natural sponges, all that stuff I don’t like,” she says. “I can’t even look at the marketing campaign for the show”—which features an oozing brain shaped like a honeycomb—“My throat starts closing up.”

In the uncertainty of each new TV season, buyers hail Paulson’s American Horror Story as an essential fall constant, reliably delivering the audiences they crave most. “The Horror Story model is very smart, because you have staying power,” says Nick Hartofilis, evp of national investment, Zenith. “It’s a genre that people love. You can change the story, and people are genuinely interested to start again and see what it’s going to be this time. It’s a huge thing to have that as a resource to be able to tap into.” Maureen Bosetti, chief investment officer, Initiative, agrees: “There’s certain shows we absolutely want to be in for their stability and audience. American Horror Story has carved out a highly engaged audience. It adds a lot of value to our overall buy.”

Of all the acting curveballs Murphy has thrown Paulson’s way, no role has had a higher degree of difficulty than that of Marcia Clark in The People v. O.J Simpson. “If you were going to take a face plant, you were going to take a big face plant in front of a lot of people, the biggest one being Marcia Clark,” says Paulson of playing Simpson’s lead prosecutor. “I felt an enormous weight to get it right for her. But at the same time, it was the most exhilarating thing I ever did.” Langraf concurs, noting that Paulson’s masterpiece People v. O.J. episode, “Marcia, Marcia, Marcia,” which delved into her ill-advised courtroom makeover, “is one of my favorite episodes of television that we’ve ever made.”

The People v. O.J. averaged 12.6 million viewers each week for FX and won nine Emmys, including Paulson’s first victory after five previous nominations. “It was incredible,” Murphy told Adweek earlier this year of the show’s and Paulson’s Emmy wins. “I had been very close to Sarah for years and years, and that I could give her that moment and help her have that recognition was amazing.”

Click for more from this issue
This story first appeared in the Oct. 2, 2017, issue of Adweek magazine. Click here to subscribe.
@jasonlynch jason.lynch@adweek.com Jason Lynch is TV/Media Editor at Adweek, overseeing trends, technology, personalities and programming across broadcast, cable and streaming video.