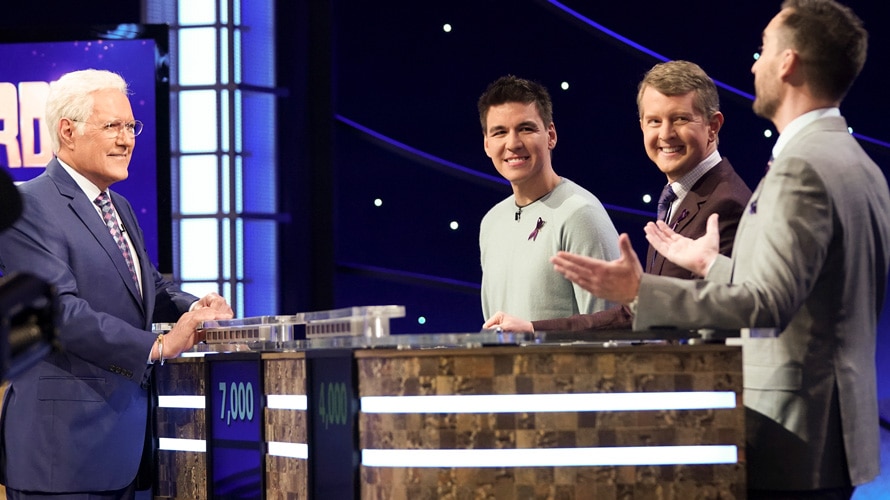 Jeopardy!'s top three all-time moneymakers—James Holzhauer, Ken Jennings and Brad Rutter—face off in the Greatest of All Time tournament. - Credit by ABC/Eric McCandless

Alex Trebek isn’t letting his age—he’s 79—or last year’s stage 4 pancreatic cancer diagnosis get in the way of his Jeopardy! hosting duties.

Trebek, who has hosted the hit syndicated game show since 1984, said that whenever he does step down, he already knows how he’ll say farewell in the concluding 30 seconds of his final episode. However, “I don’t foresee that 30-second moment coming up in the near future,” he said today at the Television Critics Association’s winter press tour in Pasadena, Calif. “As long as I feel my skills have not diminished too much … then I’ll continue doing it.”

That’s certainly music to ABC’s ears. On Tuesday, the first night of the Jeopardy! The Greatest of All Time tournament, which aired on the network in prime time, drew 14.4 million viewers and a 2.4 rating in the 18-49 demo, more than double the rating of any other broadcast series. (That said, ABC can’t officially tout those numbers yet, after announcing in November it would no longer report live-plus-same-day ratings.)

The Greatest of All Time tournament brings together the three highest money winners in Jeopardy!’s history: Ken Jennings (whose 74-game winning streak remains a Jeopardy! record), Brad Rutter (the highest money winner of all time across any TV game show, winning nearly $4.7 million in all) and James Holzhauer (who holds the record for all 15 of the top single-day winnings records on the show).

The trio will face off in a tournament that could stretch as long as seven nights (Tuesday through Friday this week and next Tuesday through Thursday), until the first contestant wins three nights. On Tuesday, Jennings narrowly defeated Holzhauer.

The Jeopardy! tournament is part of ABC’s new monthly event strategy in which the network will air at least one live or tent-pole event every month to leverage the power of broadcast television over its streaming rivals.

“This is great television. It’s a competition that people have been looking forward to for a long time,” Trebek said. Prior to Holzhauer’s run on the show last year, “there was never a third candidate that we could put in against Ken and Brad and make it plausible.”

Jennings said he watched tape of his competitors on the show to prepare for the tournament. “I feel like an offensive coordinator, watching James in slow motion,” he said. “If you saw last night, you realize, Brad and I are going to have to take big chances. We’re going to play like James” or get “steamrolled.”

While ABC Entertainment president Karey Burke told reporters earlier in the day she was eager for a follow-up tournament, Trebek suggested waiting more than a decade and then holding “the Greatest of All Time seniors tournament when these guys age.” He added, “I’m up for anything that makes sense, and this tournament certainly made sense.”

Trebek admitted that the he and the show have been operating under a brighter spotlight since last March, when he revealed his cancer diagnosis. “The pity factor … is out there,” Trebek said. “People have been so kind.”

While Trebek isn’t ready to step down yet, he reflected on his legacy during his press tour session.

At one point, Trebek recalled that the press coverage of his decision to shave his trademark mustache in 2001 “blew my mind.”

“There were wars going on in the Middle East and you guys were focusing on my mustache? Get a life, please,” he said

As for his health, “some weeks are good and some weeks are bad, but that comes with the territory,” said Trebek, who goes in for more tests on Thursday. (A week or two after that, he’ll know “where things stand.”)

During the week he taped the GOAT tournament, “I feel like I was not having one of my best weeks,” Trebek said. “I seemed a little slower in the ad-libbed portions.”

Jennings called Trebek “the last of the old-school broadcasters still on our TV every night.”

Trebek said he disagreed with the notion that there would be no Jeopardy! without him. “There are a lot of great game show hosts who have been on television over the decades, and a lot of their success has depended on the success of the show,” he said.

What will Trebek do whenever he does decide to step down from the show? “Drink,” he quipped.