But sharing key assets like Friends 'is not a good model,' said Kevin Reilly 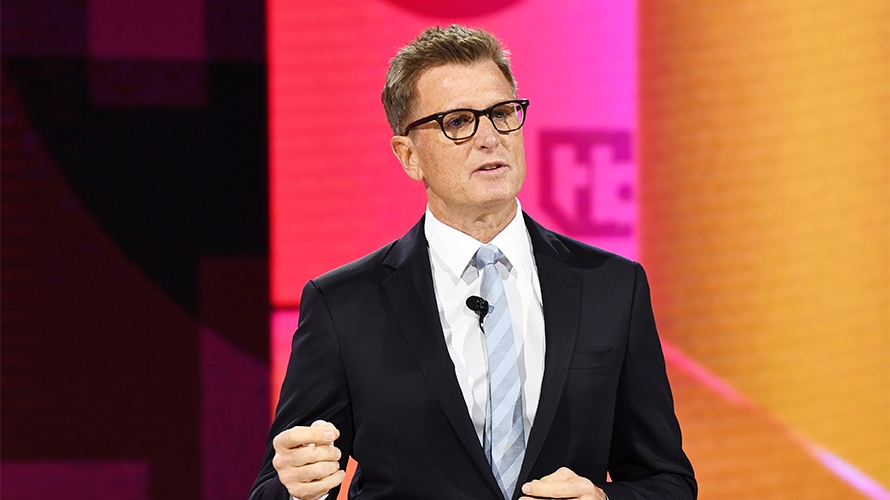 One of the biggest TV industry face-offs will occur at the end of the year, when both Disney and AT&T roll out their new streaming services shaking up the OTT industry.

Reilly, who is president of TBS and TNT as well as CCO for Turner Entertainment, added another title—CCO, WarnerMedia direct-to-consumer—in December, as he was tapped to oversee content for the new streaming offering.

The still-unnamed OTT product, which AT&T first announced in October, will rely heavily on content from WarnerMedia, including HBO and the Warner Bros. library. It will be a three-tiered service: a core platform of movies, followed by a second tier of original programming and blockbuster movies and a third layer featuring the company’s library content (some of which could be licensed from third-parties), including classics, kids/family and niche programming.

“Our initial launch will be a beta product in Q4, and we’ll ramp up and refine the service through 2020,” said Reilly.

AT&T’s entry will arrive in the streaming marketplace alongside new offerings from Disney and Apple this year, with NBCUniversal’s service due in the first half of 2020.

But “this is not a zero-sum game,” said Reilly. “Our mission is to offer consumers an excellent, differentiated alternative to be one of their new choices.”

To that end, Reilly stressed that he isn’t looking to take down any of the other streaming giants.

"We're not looking to battle with Disney. This is going to be its own differentiated service."
-Kevin Reilly, Turner chief

“We’re not looking to battle with Disney. This is going to be its own differentiated service,” said Reilly.

AT&T’s new service is “not a defensive move against Netflix,” nor is it “a hedge against Turner.” He added, “we don’t need to beat Netflix. We just need, and desire, to offer a differentiated alternative.”

AT&T’s new, still-unnamed service will offer “virtually something for everyone,” said Reilly. While HBO is “at the core” of the new product, there will be content for kids and family (from Looney Tunes, Hanna-Barbera and Cartoon Network, as well as film franchises like The Lego Movie) and teens/young adults (The CW and Adult Swim). Plus, there will be documentaries and films from CNN, and Warner’s library of films and shows like Friends and The Big Bang Theory.

Reilly will begin commissioning original content for “each of these audience segments,” he said, but those original shows won’t be ready for this fall and will instead roll out in 2020 and 2021. That differentiates the service from Disney+, Disney’s upcoming family-focused OTT service, which is expected to offer original content when it debuts in the same timeframe as AT&T’s offering. “We are building a much broader service than what I understand the Disney+ product to be,” said Reilly. “From the get-go, it will be seen as two different choices.”

As for whether the service will share content with DC Universe, another OTT offering from WarnerMedia, “we’re working on the particulars on that right now,” said Reilly. “We want to respect and build off that fandom.”

There is “no piece of content” in the WarnerMedia portfolio that won’t initially be considered for the new service, said Reilly, though not all of them will end up there. However, “you can expect the crown jewels of Warner will ultimately end up on the new service,” he said.

That includes Friends, which is one of Netflix’s most-streamed titles, according to Nielsen. Last December, AT&T and Netflix struck a non-exclusive agreement, under which the title will appear both on Netflix and the new AT&T service, an arrangement that Reilly is not a fan of.