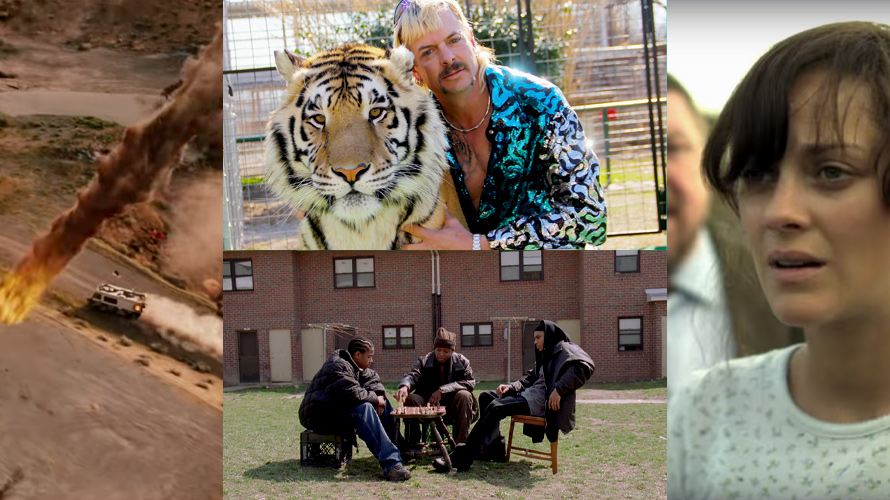 (Clockwise from left) 2012, Netflix's Tiger King, Contagion and HBO's The Wire are among the most popular titles to stream during the COVID-19 crisis. - Credit by Netflix, Warner Bros. Entertainment, HBO, Sony Pictures Entertainment

As much of the U.S. continues to stay home in an effort to slow the novel coronavirus’ spread, viewers are using their newfound downtime to binge-watch movies and old shows. And they’re still seeking out pandemic and disaster-related programming that began to surge a week ago on Netflix and other platforms.

On HBO Now, WarnerMedia’s standalone streaming service, viewership of the documentary Ebola: The Doctor’s Story is up more than 7 times this week compared to previous weeks, and the film Contagion, which has spiked on rental services like iTunes, is the top title on Cinemax’s on-demand and digital platforms, according to WarnerMedia Entertainment and direct-to-consumer chief research officer Cheryl Idell.

Overall, viewership on HBO’s direct-to-consumer streaming service has surged 40% since March 14—the highest numbers the service has seen since last summer. Viewers seem to be using the lockdown to watch popular older HBO series: The Wire’s viewers have tripled, while audiences for The Sopranos and Sex and the City have nearly doubled.

Binge-watching three or more episodes on HBO Now has jumped 65% compared to the past four weeks, and movie viewing has increased 70%, Idell said. Disaster films like Armageddon, the Vietnam War classic Apocalypse Now and the horror thriller Black Swan are particularly popular.

“We expect to continue seeing elevated traffic to HBO Now and our linear networks over the next several weeks as people continue to work remotely and to distance themselves from others during the COVID-19 crisis,” Idell said in a blog post about the viewership data. “In times like this, television can be a powerful tool to bring people together emotionally when they are not able to be together physically. We’re encouraged that these elevated numbers indicate that people are taking isolation efforts seriously, and we hope that continues to be the case.”

On Netflix, interest in pandemic and disaster-related programming continues to soar, with films like Outbreak, Aftermath, 2012 and 3022 all landing in Netflix’s top 10 movies on the service in recent days, according to the streamer’s top 10 lists, which are updated daily. The Netflix original documentary Pandemic has remained in the top 10 series watched on the service in the U.S. since March 14. Other Netflix originals like the true crime documentary Tiger King have shot to the top of the service’s top 10 list, as has the horror thriller movie The Platform and the film Spenser Confidential.

Samba TV, which measures television viewership across connected TV devices, found that viewership on Netflix and Amazon Prime Video was up by double digits from March 12-18. On March 18, the services saw a 41% spike in viewership compared to the same day a week prior. And average time spent watching premium programming on subscription services like HBO, Showtime and Starz and their affiliated channels more than doubled from March 17-23.

“People are going to these subscription services and spending an exponentially more time there,” said Dallas Lawrence, Samba TV’s head of TV insights. “People are going back and revisiting shows they love, and they’re also binge-watching shows that they’re just now finding the time to be introduced to.”

On ad-supported streamers, the spike in viewership is similar. Tubi said streaming on the free, ad-supported service is also at an all-time-high. Chief revenue officer Mark Rotblat told Adweek that Tubi users have spent more than 42 million hours watching programming from March 14-21 and total viewers have grown 22% in the past two weeks. All of the services’ 10 most-popular titles have been movies, Rotblat said.

As the rest of the entertainment industry faces steep losses due to movie theater, theme park and arena shutdowns, streaming services’ surging growth highlights the strength those companies have. Overall, streaming video has increased 25% across all platforms, according to figures from the measurement firm Alphonso, and it’s likely to keep growing as the coronavirus crisis continues to make its way throughout the U.S.