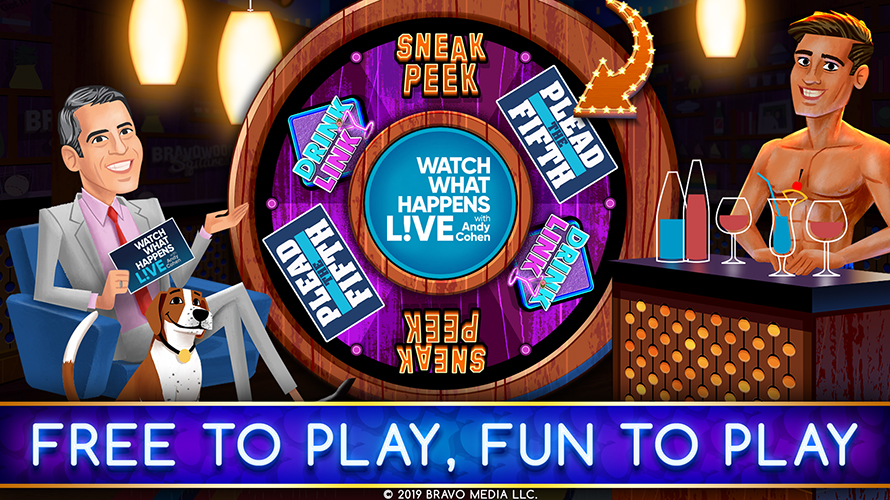 Andy Cohen, and his dog Wacha, are front and center in the new game. Bravo

You may already follow Andy Cohen and his iconic dog, Wacha, on Instagram or you may have seen them on his late-night Bravo talk show, Watch What Happens Live with Andy Cohen. Now, there’s another place to catch up with the duo: a new mobile game.

“Watch What Happens Live with Andy Cohen” is a new slots game from Bravo in partnership with myVEGAS Slots that takes users to the Bravo clubhouse to do some gambling.

Fans of Cohen and his show will notice the familiar setting, with Cohen on his chair and Wacha by his side, as well as a barely-clothed bartender serving up drinks.

The slots feature many thumbnails of Cohen’s face as the wheel spins and the platform has in-game promotions to get extra spins.

“We’re moving a bit more into the direction of looking at games as an alternative revenue for us,” said Kris Soumas, senior director of emerging media, Bravo and Oxygen Media.

This isn’t the first mobile game for the network, or even for Watch What Happens Live, but Soumas said the audience is always hungry for more content after an episode, and have turned to the network’s podcasts and social media feeds for more.

“We feel like gaming is an opportunity for us to strengthen that further,” she said.

The game is intended to reach the biggest Bravo fans, and players could unlock bonus content, including exclusive clips from upcoming shows or behind-the-scenes footage from Watch What Happens Live.

Users will also have a chance to play one of the show’s hottest games, Plead the Fifth, in which Cohen asks his guests three questions and they can only choose to not answer, or plead the fifth, to one. Each question answered gives the player multipliers or bonus jackpots.

“We’re particularly interested in how game developers and TV creators can come together and create this new hybrid entertainment format,” Soumas said.