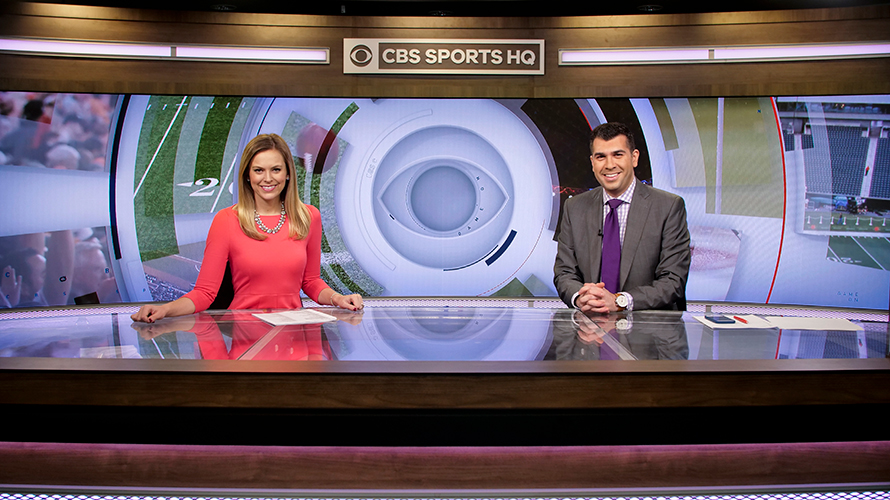 The free, ad-supported network, which debuted this morning and is a collaboration between CBS Sports and CBS Interactive, contains live coverage from anchors and reporters, who will offer news, scores, stats, highlights and information through the day.

At its launch, CBS Sports HQ will feature live programming in “five main windows,” said Jeff Gerttula, evp & gm of CBS Sports Digital. “The early morning, afternoon, early evening and then throughout the evening as games come to completion,” with the possibility for additional coverage around breaking news or days with major sports events. Audiences will have the option to view either live programming or previous segments.

Out of the gate, “we’re sticking to the foundational pillars of news, scores, stats and highlights, which we think are the foundations of information that sports-hungry fans want. We want that to be the common theme around the clock, that people can come in and they get smarter about the game,” said Gerttula, who stressed that CBS Sports HQ is only in its “first inning” and will evolve over time, depending on how viewers respond.

As CBS targets younger viewers with CBS Sports HQ, it is patterning the new offering after its streaming news service, CBSN, which debuted in 2014, and also is free, ad-supported and available on all streaming devices. The average age for viewers of CBSN and CBS All Access is “nearly 20 years younger” than a CBS linear viewer, CBS Corp. chairman and CEO Les Moonves said earlier this month on an earnings call.

The network’s launch comes as several media companies, including Fox News, are preparing their own direct-to-consumer offerings, while ESPN and Fox Sports already offer significant sports news coverage. But Gerttula said CBS Sports HQ will stand out in a crowded field because “it’s free and easy to access everywhere,” and it’s relying on the expertise of CBS Sports, as well as CBS Interactive, which has created the company’s other OTT offerings, like CBS All Access and CBSN.

“This is a crowded space, but we think we know a lot about it because of what we’ve already done on the news and entertainment side, and then on the sports side, us pairing with broadcast and being partners there gives as an advantage, because we’re not starting from scratch there either,” he said.

Gerttula said the company had targeted a launch ahead of its NCAA Men’s Basketball Tournament coverage in March, which is followed by the Masters Tournament. “It’s one of our busiest times of year,” said Gerttula. “It’s a significant season for CBS Sports, and the timing made a lot of sense.”

The network will feature a mix of talent from CBS Sports Digital (Jorge Andres, Nick Kostos and Brady Quinn), CBS Sports (NFL on CBS reporter Jamie Erdahl) and new anchors and analysts (Hakem Dermish). “Everyone at CBS Sports Digital is going to be part of this,” said Gerttula. “We’re going out as one big family and I expect that as you see this roll out, you’ll see a wide variety of faces across CBS Sports.”

CBS Sports HQ includes advertising from the same brands and categories that appear on CBS Sports’ other digital properties. “But we’ve got a lot of interest, we’re excited and we’re feeling good about the overall breadth of advertisers we’re going to have in here at the outset,” Gerttula said.

In a statement, Moonves called the new offering “another key step in the evolution of the CBS Corporation. From CBS All Access to Showtime OTT to CBSN, we are creating best-in-class direct-to-consumer streaming platforms that are positioning us to be leaders in the future of premium content distribution.”

Added CBS Sports chairman Sean McManus in a statement, “It’s a terrific platform for us, as we extend the CBS Sports portfolio, reaching the growing audience of young viewers who get much of their news and information on digital platforms.”

When CBS announced last August that it would create a sports news streaming network, Moonves said his company would rely on the same infrastructure it uses for CBSN to keep costs down. “We think we have a good opportunity to succeed,” said the CEO. “The chances of profitability are very good.”

At the time, Moonves noted that CBS had launched CBSN in 2014 as a digital news network, rather than a linear one, because “to begin a brand new cable news network would not be smart” with CNN, Fox News and MSNBC already well-established. Instead, “it seemed logical to go into streaming. There’s an opportunity in sports as well.”