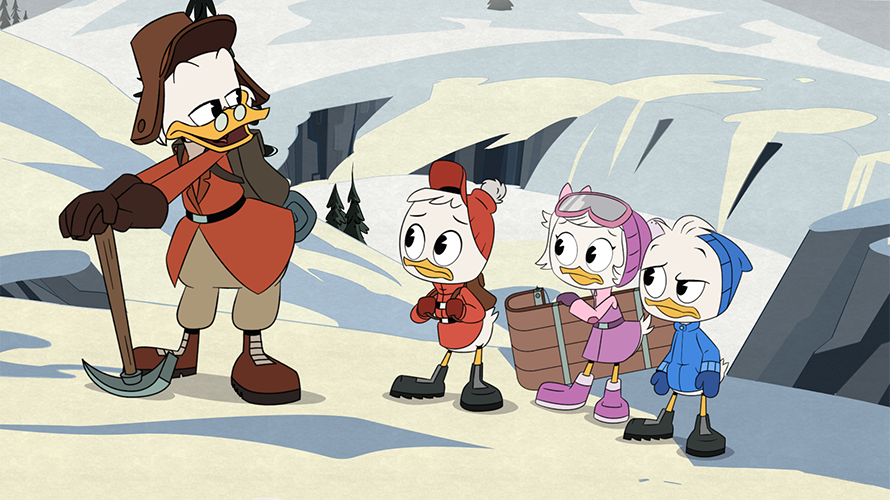 Many of Disney's shows like DuckTales feature beloved brands and characters with multigenerational appeal. - Credit by Disney XD

While Disney combined its entertainment ad sales teams into a single, portfolio-wide division a year ago, this is the first upfront to take advantage of those changes—and the first year that Rita Ferro, president of advertising sales, Disney-ABC Television Group, will be positioning the Disney kids networks (Disney Channel, Disney XD and Disney Junior) as part of a portfolio-wide buy for brands that could also include ABC and Freeform.

“The brands actually level into each other. You bring an audience in through Disney Channel; eventually, you want to grow them to become a Freeform audience, and eventually, you want to grow that audience to become an ABC audience. So if we do start to build those portfolio opportunities, it will be the natural course of progression for brands over time,” said Ferro, who noted that moms are also part of the target audience for brands advertising on the Disney Media outlets, as they are watching with their kids.

During the event—which continues through tomorrow—Ferro and Nancy Kanter, general manger, Disney Junior Worldwide, will share the company’s insights and data around kids and families. “We make sure our partners have all the access to the information that we have that helps inform how we think about content creation, distribution, marketing and really speaking to kids and families,” said Ferro.

Disney-ABC is extending its annual Videobiquity study, which tracks multi-platform usage in its portfolio into the kids and family space for the first time. It’s also closing the measurement gap, becoming the first kids content provider to implement Nielsen’s software development kit (SDK) in its DisneyNow streaming app; it will be able to include that viewership in its Nielsen ratings. “Being able to count those screens where a lot of the consumption is taking place is really important,” said Ferro.

Ferro, who was named president of advertising sales for Disney-ABC a year ago, had previously overseen ad sales and marketing for Disney Channels Worldwide since 2010. For the past couple years, she led separate upfront events at Disneyland in Anaheim, Calif. (for West Coast clients) and Disney World (for Midwest and East Coast clients). But she said the toy companies would attend the Disneyland event while agencies and package goods would go to Disney World, “and there wasn’t a lot of overlap of categories.”

By instead holding a single event for all clients this year, “we have a cross section of advertisers and agencies in the room and a cross section of the key category spending in kids to really share best practices and insights across the board,” said Ferro. “It helps us in hearing them, but it also helps them in figuring out how they actually could potentially do things together, with or without us.”

The event will also focus on the three pillars that drive storytelling at Disney: firstly, heritage, which refers to beloved brands and characters in series like Tangled, DuckTales, Big Hero 6, Mickey Roadster Racers and the upcoming revival of Muppet Babies (debuting March 23 on Disney Channel). “Those are characters that have audiences for generations built in, that when you bring out new IP [intellectual property] with that content on our channels, it just connects with viewers,” said Ferro.

The second pillar is animation, which includes shows like Disney XD’s Star vs. the Forces of Evil and Disney Junior’s Vampirina, as well as two new original animated series just ordered by Disney Channel: Amphibia, about a 13-year-old girl who is transported to a rural marshland inhabited by frog people, and The Owl House, about a girl who finds a portal to the Demon Realm and becomes friends with a rebellious witch.

The final pillar is authenticity, which Ferro defined as “telling authentic, real stories that represent families and kids, and their life today.” Live-action series like Andi Mack, Raven’s Home and Stuck in the Middle feature characters that “aren’t the traditional family, but they are families that we see in everyday society,” she said.

Each of those partnerships were successful, even though “they’re not the advertisers that you automatically think of when you think of kids networks,” she said.

But they all represent new ways for brands to reach women 18-49. “There’s a safe environment and quality storytelling, and it engages mom and her overall family experience,” Ferro said. “We’ve seen that more and more brands are doing that. They understand now that it’s extension of what they’re doing across the portfolio.”

As will be the case for all of the networks involved in the pending Disney-Fox deal, Disney hasn’t altered its upfront strategy and will be focusing its messaging on the assets it currently owns, not the ones the company will acquire if the deal closes. Another topic that won’t be addressed at the Disney Media upfront is the upcoming family-themed direct-to-consumer streaming service that won’t launch until fall 2019 and won’t contain ads.