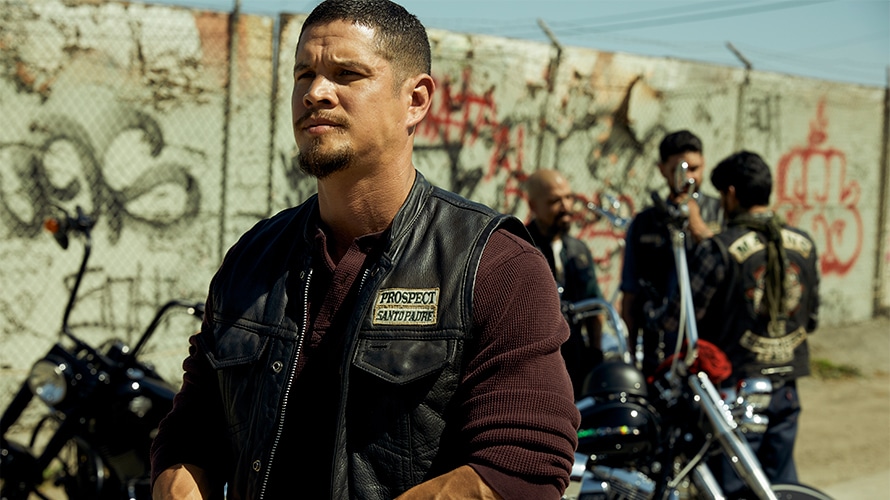 Mayans M.C. is told from the perspective of a Mayans prospect, played by JD Pardo. James Minchin/FX

Most networks have aired spinoffs or prequels based on at least one of their most popular shows, but not FX. That changes tonight, with the debut of Mayans M.C., which is set in the world of—and features a few characters from—Sons of Anarchy, one of FX’s most popular series of all time.

Sons—about an outlaw motorcycle club in fictional Charming, Calif.—ran for seven seasons, drawing 9.3 million for its 2014 series finale. Mayans M.C., which is co-created by Elgin James and Sons of Anarchy creator Kurt Sutter, takes place four years later, and focuses on the Mayans club that had clashed with the Sons before becoming an ally later in that show’s run.

“Sons is a whole world, and it’s a world that had never been built out into a scripted program before: the world of the outlaw motorcycle club,” said FX Networks CEO John Landgraf.

Unlike any other show that has aired on FX, Sons of Anarchy “is practically a lifestyle brand. From a merchandising standpoint, it’s just crazy, the panoply of products people bought and still are buying around the Sons of Anarchy world. So that indicates the profound level of interest and affinity” that people have for that world, Landgraf added.

That said, he didn’t want the first Sons of Anarchy spinoff to be based around one of the original show’s main characters.

“We wanted to create a show that had its own world and its own raison d’être, so we decided to set it in an outlaw motorcycle club, but not a different chapter of Sons of Anarchy, or that chapter at a different time,” said Landgraf, adding that future shows could cover that territory.

The show’s most direct tie to Sons is Alvarez, played by Emilio Rivera, who is the head of the Mayans and an occasional presence on the original series. He appears on Mayans M.C., but in a limited role because his character runs the national organization. “He shows up at times of crisis in this local chapter, but essentially it’s all new characters,” said Landgraf.

Instead, this new series is told from the perspective of a Mayans prospect, EZ Reyes (played by JD Pardo).

Landgraf was so intent on getting FX’s first spinoff series right that he had Sutter and James reshoot the pilot, recasting some of the main characters, including the president of the local chapter, Bishop, who is now played by Michael Irby. He had done the same thing on Sons, reshooting the pilot with some key recasting, including Clay Morrow (played by Ron Perlman).

In addition to the recasting, Landgraf and the creative team “took a fair amount of narrative material out so that we could provide a sort of simpler and clearer point of entry to the audience,” he said.

During his pre-FX time as a producer, Landgraf said he never understood why so many pilots that networks had invested millions in were just abandoned and never saw the light of day.

“From my standpoint as a producer, what I always noticed is that sometimes you figure it out there were problems with the script that you didn’t see before you shot it, but now you know how to fix it,” he said. “Really good ideas and good material are at such a premium, and it always seemed odd to me that you’d just throw it out and start over.”

He’s taken the opposite approach since arriving at FX in 2004.

“I always thought in the long run, it was actually better and more cost efficient if you really believe in something to just keep working on it until you think it’s good enough,” he said. “We just decided, the franchise is too important to put anything out there that isn’t the best it could possibly be. We took the extra time to get it right.”

That touches on a mantra that Landgraf shared with Adweek in a cover story earlier this year about how he helped build FX into one of TV’s edgiest brands. As he explained at the time:

Landgraf’s decision to reshoot the Mayans M.C. pilot rather than rush something on the air that could ultimately stall the franchise is the most recent example of that approach.

“That was a hardship within the year,” he said, “but if I’m thinking about investing by the decade, I think it was a much better decision.”