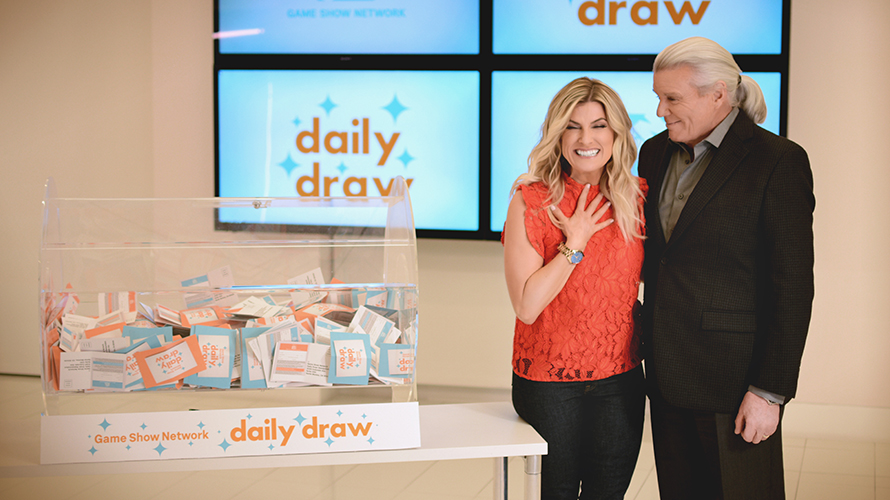 In the past couple of years, a revival of the game show genre has swept TV, with shows like Celebrity Family Feud, Match Game, $100,000 Pyramid and Snoop Dogg Presents The Joker’s Wild. And now the craze has expanded to mobile devices, led by game show sensation app HQ Trivia.

That’s good news for GSN (Game Show Network), which programs game shows around the clock, as it heads into this year’s upfronts. “What you have essentially is a marketing vehicle for us, because no one programs as much as we do. So if you can’t get satisfied with the intermittent games that are programmed elsewhere, you can come to us every night,” said John Zaccario, evp, ad sales for GSN.

The network has been leaning into that strategy under Fran Shea, evp, programming and marketing, who joined GSN last October and helped complete the network’s pivot back to traditional game show formats and scheduling. The upcoming shows that GSN will discuss in its upfront agency meetings are new spins on already-successful series, and will be “stripped” across all five weeknights, just as syndicated game shows are.

“Game shows are meant to be watched in strips. You don’t have Wheel of Fortune or Jeopardy! on a Tuesday night; it’s on every night. That’s what this audience really likes,” said Shea.

But as the network is going old-school, it also has an eye on its mobile competition, and is planning its own HQ Trivia-like offering.

Since her arrival, Shea has been studying the GSN audience, and prepared a slate of new shows that reflect what they want: “family-friendly, fun, escapist television.”

In America Says, two teams of friends and family compete to answer fill-in-the-blank survey responses. “It’s not far from Family Feud, but our own spin on it,” said Shea.

There’s also Caroline & Friends, in which comedian Caroline Rhea will pick her favorite funny and cute viral videos with help from two celeb pals, and present a “best in show” prize to the family who submitted the winning video. The show is created by Vin Di Bona, who also created America’s Funniest Home Videos, which is now known as AFV and has been running on ABC since 1990.

Shea said GSN’s audience likes hosts who are “friendly, having fun and are on the side of contestants”—much like Ben Bailey on Cash Cab, which is syndicated on GSN—which led them to cast Rhea.

One exception to GSN’s new “stripped” mantra is Cover Story, the network’s series of documentary specials that look at famous and infamous game show moments and scandals. The 10 episodes airing this year will go behind the scenes of The Price is Right, explore how lottery winners’ lives were changed in good and bad ways and look at the most famous game show contestants, like Jeopardy!’s Ken Jennings.

GSN’s pivot to traditional formats and scheduling will open up more opportunities for advertisers. “They’re simpler to produce, and they all come with easier lead times and formats that are more welcoming to brands,” said Zaccario.

One of GSN’s initiatives in last year’s upfront was to turn its viewers into contestants themselves, which led to Game Show Network Daily Draw, a short-form sweepstakes in which a $500 winner is announced each night by host Trish Suhr and various game show-related guests. Viewers can enter after entering that day’s code name, which appears on screen during GSN prime-time shows.

The show was developed as HQ Trivia began taking off last year. “It wasn’t done as a response to that, but the idea that Game Show Network should have a game,” said Shea. “We approach it as a one-minute show that you’ll see grow into more of a presence on the network. We may be doing larger giveaways over time, maybe an annual bigger giveaway.”

And Shea said GSN is planning its own version of HQ, the details of which are still under wraps. “You will see us responding in the HQ space,” she said. “It’s nothing I can talk about right now, but that’s not lost on us.”

GSN, which is owned by Sony Pictures Entertainment and AT&T Entertainment Group, is the rare independent network in an upfront dominated by more consolidation among networks and media companies. “We’re not encumbered by larger corporate priorities that sometimes make getting business done difficult, especially in an upfront marketplace,” said Zaccario.

As the TV industry has evolved, “premium is becoming defined by the consumption patterns of that audience, rather than just the age and gender of that audience” said Zaccario, who added that GSN is a top ranking entertainment network when it comes to audience consumption in the mass merchandise, casual dining, wireless and fast food categories.

In addition to its upcoming series, GSN is developing several shows, including Catch My Bluff (where people create fake answers to trivia contestants in an effort to thwart their fellow contestants), Movin’ Money (think Cash Cab, but with a pedal tavern: a bar powered by bicycles pedaled by the patrons) and Mall Madness (a shopping spree show at the Mall of America).