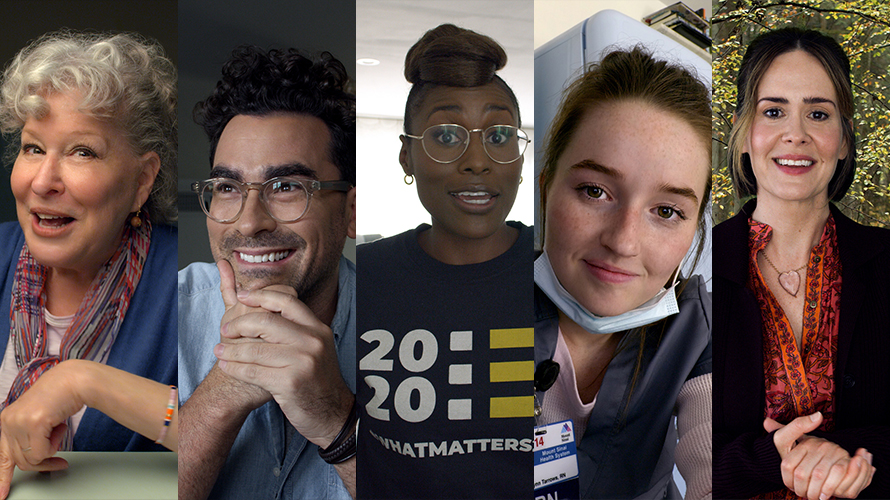 While a handful of scripted shows have remotely filmed single episodes set during Covid-19, HBO is upping the ante, scheduling the first scripted series shot and set entirely during the pandemic.

Coastal Elites—a comedy about five characters coping with the pandemic, politics and culture—will debut Saturday, Sept. 12, the network said today at the CTAM virtual press tour, which is partially replacing the annual Television Critics Association’s summer press tour, canceled this year due to the pandemic.

HBO has lined up an all-star cast for the series, most of whom shot their scenes from their own homes.

Bette Midler plays a long-term New York public school teacher who finds herself in police custody, Kaitlyn Dever is a nurse who flies from Wyoming to New York to volunteer at a hospital at the height of the city’s Covid-19 crisis and Dan Levy portrays an actor in West Hollywood who is videoconferencing with his therapist. Also, Sarah Paulson plays a YouTube personality who is filming “Mindful Meditations” episodes to inspire her followers and Issa Rae is a philanthropist who uses her prep school network connections to reach the highest levels of government.

Writer Paul Rudnick said he started working on Coastal Elites more than a year ago, as he realized people on both sides of the political spectrum were so passionate about their beliefs. The project was originally conceived for New York’s Public Theater, and was going to be filmed onstage for an HBO special.

But the project evolved as the pandemic hit earlier this year, and Rudnick realized that “these were people who demanded to be heard, who had stories.”

Director Jay Roach says the series—which features each character addressing the camera directly—mirrors the experiences of many people during the pandemic, where “we’re coping with this alone” but also use Zoom “to commiserate with people.”

The format “provides a real intimacy, that you have a one-on-one experience with these characters,” said Rudnick.

The series provided the actors a rare opportunity to continue working during the pandemic, as most production is shut down. “For me it was cathartic, but unfortunately not cathartic enough, because I’m still in a state of rage and anxiety [about the country],” said Midler.

Most of the actors shot at home, with a very limited crew. During the pandemic, “my paranoia level was high already, and there were all of a sudden seven people in my backyard,” said Paulson. While the actors filmed alone in the room, the tiny crew was located just outside, attending to cables and the lighting.

However, all safety protocols were followed to keep the cast and crew safe. “I felt very well taken care of. I’m so paranoid because I’m so old [but] I really felt like I was in superb hands,” said Midler. “Every question I had was answered, and I got a free Covid test out of it. So it was a win-win all around.”

While projects often take a year or longer between the time they are written and when they air, Rudnick was able to weave the latest current events related to the pandemic and the Black Lives Matter protests into the material as they were filming. “We let the entire world in, and see how it informs their lives,” he said. “The stakes just kept getting incrementally higher.”

Since the pandemic shut down almost all Hollywood production in March, a few shows have tested new formats, including animated episodes, and filmed standalone coronavirus-themed episodes remotely, including the CBS courtroom drama All Rise and Apple TV+’s comedy Mythic Quest: Raven’s Banquet.

And while several new unscripted series have launched during the pandemic, including Food Network’s Amy Schumer Learns to Cook, Coastal Elites is the first scripted show that was filmed entirely during Covid-19.

The filmmakers aren’t yet sure if there will be a followup season. “God only knows,” said Rudnick, but the world is in such tumult that “there will always be more to write about.”