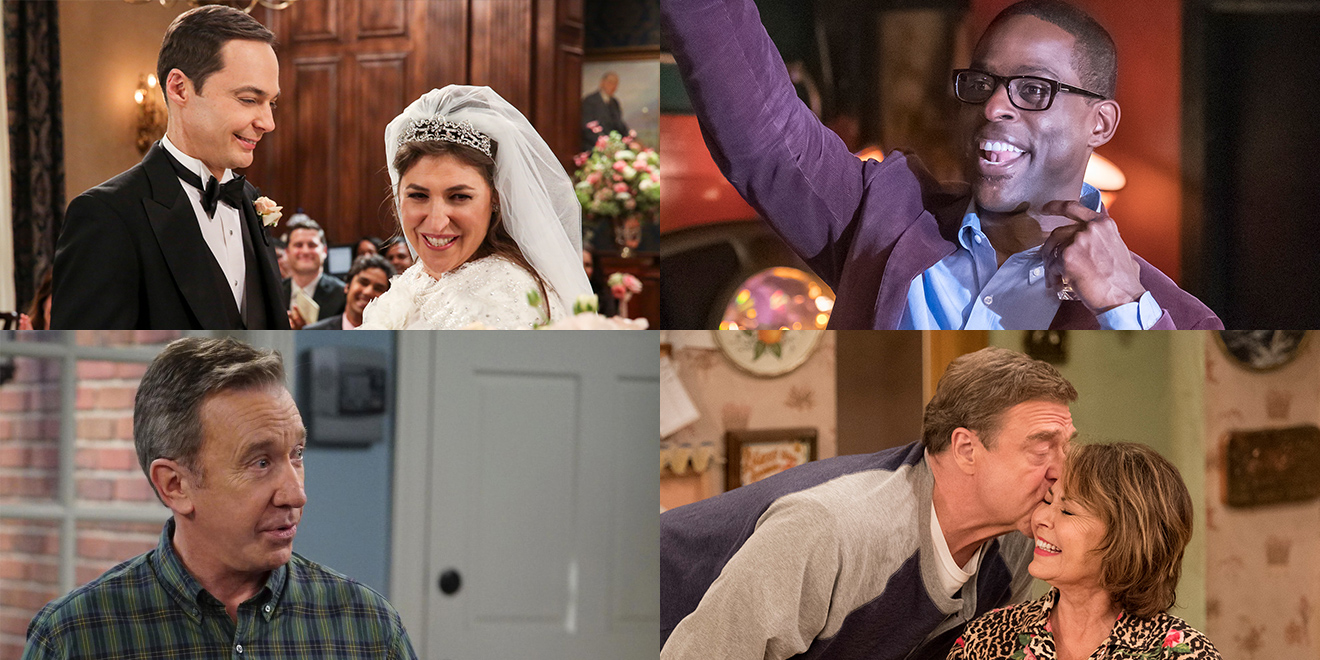 The Big Bang Theory, This Is Us, Last Man Standing and Roseanne are on the lips of network execs ahead of next week’s upfronts. - Credit by Soures: CBS, NBC, ABC

With just five days to go until the broadcast upfronts begin, it’s crunch time at the five broadcast networks, as execs finalize their schedules for the 2018-19 TV season. They’re determining which current shows to extend for another year and which to pull the plug on (you can find the latest renewal and cancellation updates here), which pilots are worthy of a spot on the schedule and what other moves they can make to keep audiences watching linear TV.

Here are the big issues they’ll be struggling with before making their pitches to buyers and advertisers next week.

This time last year, it had the least pressure of any broadcast network: with both Super Bowl LI and the Winter Olympics set for February, NBC knew it had this season’s 18-49 demo victory in the bag—and they did. But its attempt to stay No. 1 for the third straight season will be much tougher next season without either event, and the loss of Thursday Night Football games this fall.

Last season, the network’s biggest “new” hit was its revival of Will & Grace, which has already been renewed for two more seasons, and NBC’s best chance for making a splash next season could be by landing the Mad About You revival. The sitcom’s stars Paul Reiser and Helen Hunt closed deals with Sony Pictures Television in March to return to the series, but there’s been no word since then on where the show will end up. The smart money is that it will return to NBC; if so, the network would certainly love to close the deal in the next few days so they can have Reiser and Hunt onstage Monday, just as the Will & Grace cast was featured at last year’s upfront.

Meanwhile, now that Thursday Night Football will no longer be taking up part of its fall schedule, NBC could also revisit the idea of relocating This Is Us, which continued to be a massive hit in its sophomore year, from Tuesday to Thursday. The network announced that move last year, but changed its mind after reconsidering the effect that Thursday Night Football would have on scheduling.


The looming Disney-Fox deal has clouded the network’s future (it won’t follow most of 21st Century Fox’s other assets to Disney, and will become part of what is being called New Fox), though network chiefs Dana Walden and Gary Newman say things will be “business as usual” until the deal closes. The network has filled a big hole by outbidding CBS and NBC to land Thursday Night Football for the next five seasons, but needs more new hits like midseason breakout 9-1-1.

The biggest question for Walden and Newman might be whether or not to bring back the Tim Allen comedy Last Man Standing, which ABC canceled last year after six seasons. After Roseanne’s breakout success this season, Fox is in talks to revive another series that will appeal to middle America audiences (and one that came from its production studio, which Walden and Newman also oversee), but given that the show isn’t an ideal fit with any other Fox comedy, the move could backfire.

In what could be the final season of The Big Bang Theory—which has been CBS’ most reliable show to launch new series—the network’s top priority will be shoring up its comedy lineup, which hasn’t produced a big hit in several years other than last year’s Big Bang spinoff, Young Sheldon. Kelly Kahl, his first year as CBS Entertainment president (he pinch-hit for Glenn Geller last year, as the then-chief recovered from a heart attack), will have to decide whether to keep Big Bang and Young Sheldon together, or split them up so they each be paried with new shows.

“I don’t think we’ve peaked yet on the number of people who are going to sample Young Sheldon and really like it. Could it survive somewhere other than behind Big Bang? I think at this point, it probably could,” Kahl told Adweek earlier this year. “But does that mean we’re going to split them up? I don’t know.”

There’s also the question of where best to deploy Murphy Brown, which the network is reviving next season. That show would seem destined for Mondays, where it originally aired, to help stabilize a comedy block that proved very shaky for CBS this season.

Thanks to Roseanne’s surprise success, ABC Entertainment president Channing Dungey will have to decide whether to bring the series back in the fall, to give the network an immediate ratings boost as the TV season kicks off, or hold it again for midseason. She’ll also need to determine which new (or returning) comedy is most deserving of the post-Roseanne timeslot.

Then there’s freshman sensation The Good Doctor, which she might be tempted to move from Mondays at 10 to help boost a new show (Dungey told Adweek in March that she’d only shift it to provide an irresistible “one-two punch” with a new series). In response to that show’s success, Dungey doubled down on procedural pilots (or as she calls it, “closed-ended” storytelling), as well as shows featuring Good Doctor-like underdogs; now it’s time to decide which of those potential new series can continue the network’s momentum.

Finally, there’s the fate of TGIT, which will no longer have Scandal, but could still boost a trio of Shonda Rhimes-produced shows in Grey’s Anatomy, Station 19 and How To Get Away With Murder, provided that ABC renews the latter two.

The network picked up 10 shows last month, but it will have two more hours to fill than usual on its schedule: the network will be expanding to Sunday nights this fall, programming six days a week for the first time since 2009.

And with that comes big questions: will The CW move some of its current shows there or debut new shows that night? And with an additional night to program, could president Mark Pedowitz change his stance on the network’s five superhero shows and opt to air all of them simultaneously, as opposed to having only four on the air at any given time?