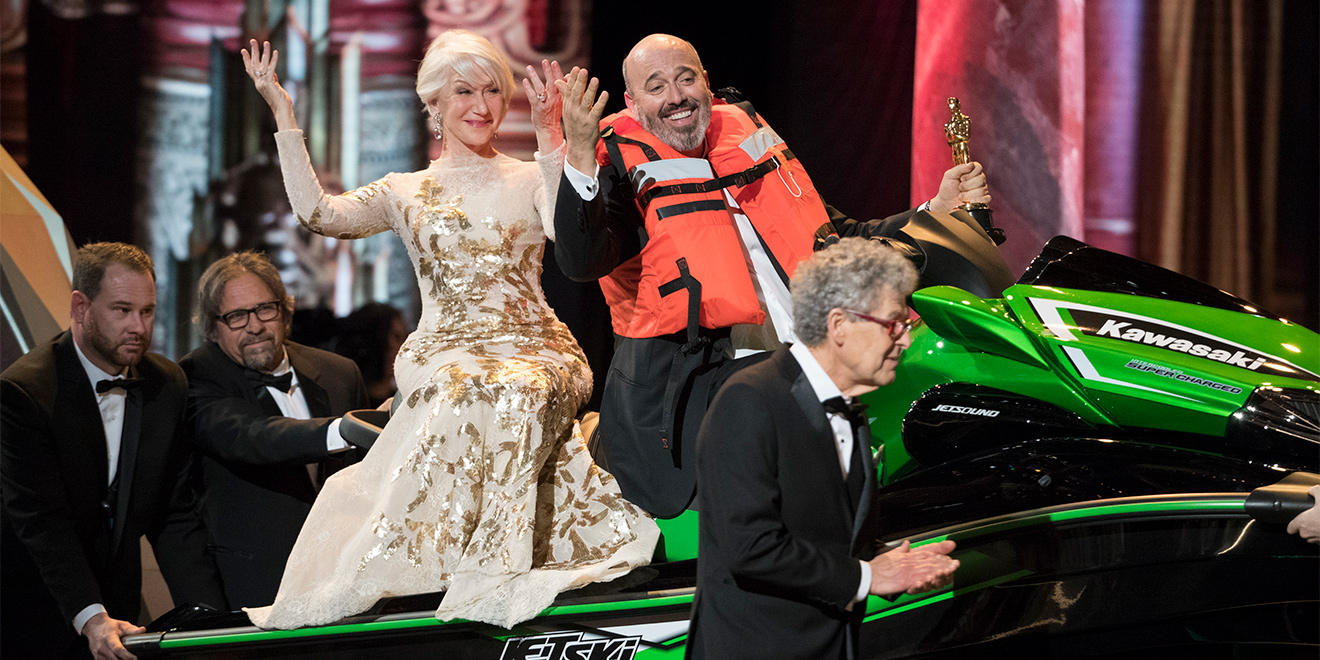 The Academy's production team approach Kawasaki two weeks ago about offering a Jet Ski as a prize during Sunday's telecast. - Credit by Craig Sjodin/ABC

Advertisers paid as much as $2.8 million per 30-second spot to appear in last night’s Oscars, but two brands received the telecast’s biggest spotlight—and all without spending a dollar on an Academy Awards ad.

Jet Ski and Days Inn both found themselves a featured part of Jimmy Kimmel’s biggest Oscars gag of the evening, as the host announced early in the telecast that he had something special planned for whichever winner gave the night’s shortest speech.

“This is a really long show, so here’s what we’re going to do,” said Kimmel. He then revealed a 2018 Kawasaki Jet Ski Ultra 310LX onstage with the help of Helen Mirren, who was channeling a Price Is Right model.

“Helen Mirren not included,” said Kimmel. “Why waste precious time thanking your mom when you could be taking her for the ride of her life on a brand new Jet Ski?”

An hour later, Kimmel said he was sweetening the pot for the winner before throwing in a three-day, two-night stay at a Days Inn by Arizona’s Lake Havasu.

The winner was Mark Bridges, who received an Oscar for Outstanding Costume Design for his work on The Phantom Thread and gave a 36-second speech. As the three-hour, 49-minute ceremony wrapped up, Kimmel brought the Jet Ski back on stage, which was being ridden by Bridges—wearing a life preserver over his tuxedo—and Mirren.

The Academy’s production team approached Kawasaki two weeks ago to provide a Jet Ski as a prize for the shortest acceptance speech.

The Jet Ski brand was mentioned frequently throughout the night, with several Oscar winners referencing it in their speeches, including Three Billboards Outside Ebbing, Missouri supporting actor Sam Rockwell (who called it a “Ski Jet”), Get Out writer/director Jordan Peele (“you guys are going to mess up my Jet Ski!”), Darkest Hour actor Gary Oldman (“obviously I’m not going to win the Ski,” he said after a long speech) and Coco songwriter Kristen Anderson-Lopez (“We were going to go for the Jet Ski, but we’re from Brooklyn!”).

“We were blown away how the Jet Ski was integrated into the show by Jimmy and that so many winners made mention of the Jet Ski on stage as well as on social media,” said Chris Brull, vp of marketing for Kawaski. “This was a fantastic integration for us.”

And yes, the company said that Bridges will indeed be receiving a 2018 Kawasaki Jet Ski Ultra 310LX.

Celebration is 2X as good on a #JetSki. Congratulations #MarkBridges for winning Best Costume Design and the biggest, fastest award of the night! #Oscars #JetSki pic.twitter.com/10U3wIY30f

Unlike Kawasaki, Days Inn said they did not receive a heads up about their inclusion in the telecast, but the brand enthusiastically jumped on board during Oscar night.

“We’re so happy Jimmy Kimmel knows what we’ve always known: Days Inn makes for a memorable spot to get away from it all,” said Lisa Checchio, svp of Global Brands for Wyndham Hotel Group. “Last night’s shout out during the Oscars was unplanned and unpaid, and we saw a chance to jump on it.”

After the telecast, Days Inn tweeted that it was offering a free stay to any Oscar nominees who didn’t win.

We’ll do you one better @jimmykimmel. We think you're all winners, so any nominees who don’t take home a trophy tonight will get a free night stay at our Lake Havasu hotel or any Days Inn location. Jet ski ride on us. #Oscars

“We’re offering a congratulatory two-night night stay on us at any of our nearly 1,800 locations worldwide, including Lake Havasu,” said Checchio.

And while the offer is for the night’s non-winners, Days Inn said that since Kimmel said a Days Inn stay was part of the prize for the shortest speech, Bridges can take advantage of the deal as well.

“We’d love to have him at Lake Havasu or any of our Days Inn hotels around the world,” said Checchio. “Just let us know when and where, Mark!”