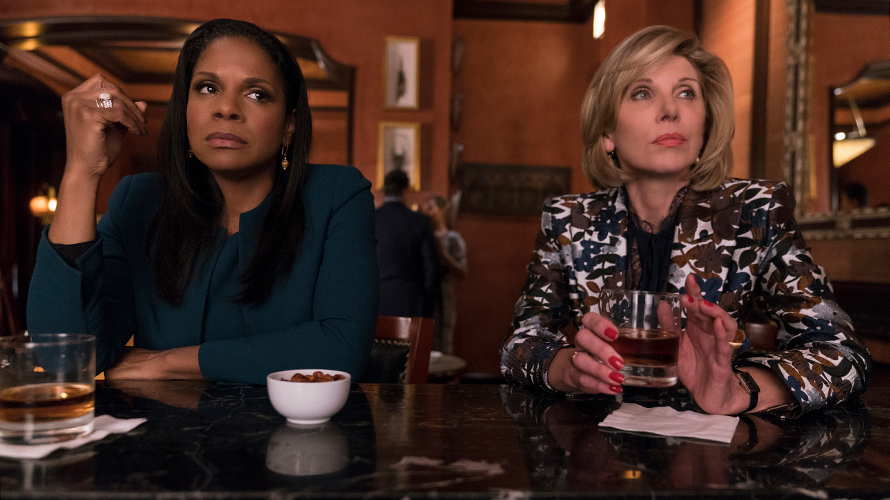 Last year, The Good Fight marked CBS All Access’ first foray into original scripted series. But Robert and Michelle King, the co-creators and showrunners of the spinoff to their CBS hit, The Good Wife, had to rewrite the show on the fly during Season 1 production when Donald Trump—not Hillary Clinton—was unexpectedly elected president.

But as Season 2 of the legal drama debuts Sunday on CBS’ streaming service, the Kings were able to fully embrace and incorporate the political and legal chaos that has suddenly became the new normal during the last 13 months. “I just don’t know what’s going on the world anymore … this is insane,” observes Diane Lockhart (played by Christine Baranski) in one early episode.

Robert and Michelle King spoke with Adweek about how much Trump is too much Trump, trying to stay of the moment in a news cycle that’s “on steroids” and how they created some of the franchise’s most enduring fictional brands, like search engine Chumhum.

Adweek: Trump was elected while you were making Season 1, and you went back and reshot the scene from the premiere to show Diane reacting to the news. But going into this season, you had a whole year of President Trump to pull from. How did that change your approach to the storylines?
Michelle: We tried to be true to the characters. It takes place in liberal Chicago. It’s been established that Diane in particular is a very political person, very left wing. And the sense is, they would be talking about politics all the time, and we’re not shying away from that.

Robert: One of the things we wanted to do was represent a lot of people’s feelings about the inundation of news. The news cycle hasn’t just sped up, now it’s on steroids. So one of the things was to live in Diane’s head about trying to adjust to this new way of seeing the world, where there’s so many distractions. And a place where the current administration is infecting so many areas of culture. I would say that’s the biggest change in this year, is trying to follow the ups and downs of the administration’s moves, and how they’re impacting our law firm in Chicago.

Your shows always strive to be of the moment, but given what you just described as a news cycle on steroids, how are you able to do that at a time in which events that happened last week often feel like they occurred months ago?
Robert: You try to look for things that we call “evergreens.” Issues like microtargeting, and the idea of microtargeting specific people. [In an upcoming episode,] our law firm finds an opponent, a lawyer, who uses it to microtarget the jury, to use fake news that he develops himself to undercut our witnesses, and to influence the jury to think one way about the case. And you’re in this impossible situation where if you bring the jury’s attention to it, to try to debunk it, are you getting people who otherwise wouldn’t look at their Facebook feed to go look at their Facebook feed?

It’s a very difficult thing that I think is going to continue to be an issue at the time this episode comes out, because of the [special counsel Robert] Mueller investigation, but also because of what Facebook is trying to do to deal with it.

Even though you pointed out that Diane and her firm would be talking about Trump all the time, how do you avoid Trump fatigue in these episodes? How much Trump is too much?
Robert: What we decided was that 5 percent of every episode would go there. Most of the episodes were about another subject, and Trump would pop up in unexpected ways. But there are two episodes, possibly three, where Trump is the subject matter, either in [discussing his possible] impeachment or in the matter of the golden shower tape [that Russia allegedly has, featuring Trump]. There are two episodes that focus on those cultural elements of the Trump administration.

One of the ways that we dealt with it was hanging a lantern on it. Diane is going insane, she’s losing her mind because she sees Trump everywhere. Part of that is making comedy of it, and part of it is following Diane’s descent this year.

You’ve created some fictional brands that not only recurred frequently on The Good Wife, but have also popped up in The Good Fight, like search engine Chumhum and faux prestige drama Darkness at Noon, which returns this season as a prequel. Did you always intend to return to those brands several times, or where you thinking of them as one-offs when you created them?
Michelle: We knew we would need to use social media and we needed to find our own, because we couldn’t use the real thing. So our hope was to create something that we would use more than once.

Robert: Although, I’ve got to tell you, we had a better name than Chumhum—I don’t even remember what it was. But legal rejected the name because it was too similar [to an existing brand], and then we went searching for possible names and came up with something at the last minute that legal agreed was okay. But I wish we had changed it early on, because Chumhum is a mouthful.

How about Darkness at Noon?
Robert: It was a satire of these True Detective shows, which—not just to pick on that show, because there were others—but that you could tell were written by suburban young man that were trying to write to their darker angels. There was always something a little silly about the tough-guy dialogue; I mean, none of these guys were Dashiell Hammett. So a lot of that was making fun of those tropes. Now, this year is different, only slightly, in that the showrunner had given up on it,but then brought it back as a prequel because he was inspired. Then we see what he was inspired by, which is that’s he’s really making fun of Trump with the show, Darkness Before Noon.

Michelle: So we’re satirizing ourselves a little bit.

Robert: And satirizing the tendency of TV shows to be self-important, as if they’re having some impact on the world through their liberal politics. So it felt like a way to do two or three things at once.

Throughout The Good Wife’s run, you were praised for delivering 22 episodes a season of a show that was of the same quality of cable competitors who were only making half that many episodes. Now that you’ve had a taste of these shorter seasons on The Good Fight, could you ever go back to 22 episodes?
Michele: That would not be my first choice. It’s really nice to have more time to obsess about individual episodes.

Robert: 22 a year was very hard. We’ve heard other showrunners say this, and we completely agree. I think I heard Damon Lindelof say this about Lost. He looks back and can’t even believe how he could do 22. It’s just a life-killer. It’s not impossible to do, but it’s close to impossible to do. Or impossible to do well.