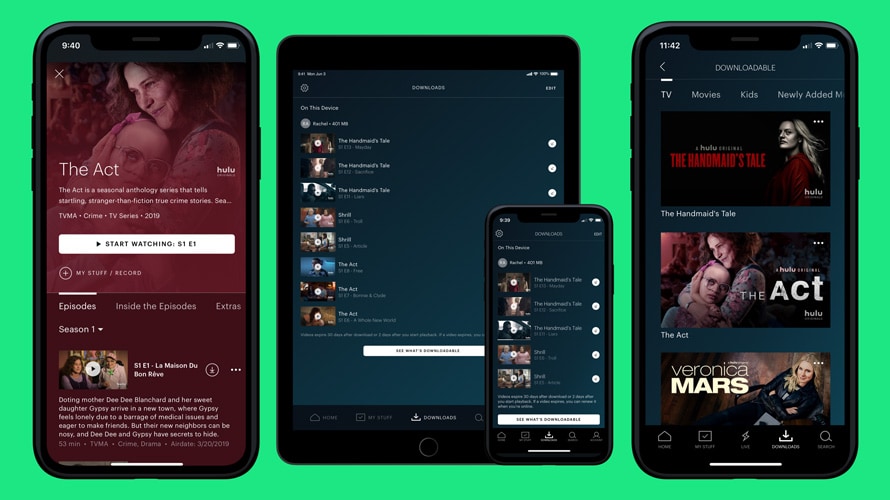 Ad-free Hulu subscribers will be able to download up to 25 movies or episodes at a time. - Credit by Hulu

Seventeen months after Hulu first announced that it would soon allow users to download its programs to their devices, the streaming service is finally rolling out the offering. But at the moment, it will only be available to subscribers of its ad-free tier.

Starting today, viewers using the Hulu app on iOS devices will be able to tap a button to download up to 25 programs across five different devices for offline viewing. At the bottom of the screen, a downloads tab will allow users to view all of their downloaded content.

Downloaded content will be available for 30 days after it is downloaded and will expire from the downloads tab two days after it’s viewed.

An update for Android users is coming imminently, a Hulu spokesperson said, but it’s unclear when that update will be available.

The ability to download content brings the streaming company in line with other services like Amazon, Netflix and Showtime, which have long offered subscribers the option to download content for later viewing without needing an internet connection. But the option will only be available for subscribers who pay $11.99 a month to watch Hulu without advertising. More than two-thirds of Hulu subscribers pay for a cheaper, ad-supported subscription that costs $5.99 a month, Hulu has said.

It’s a scaled-down version of the download offering that Hulu announced at its NewFronts event in May 2018. At the time, Peter Naylor, Hulu’s svp, advertising sales, said subscribers to Hulu’s limited ads tier would also be able to download shows, which would contain advertising.

That feature, though, has remained elusive. The technical requirements for ad-supported offline viewing are difficult when it comes to serving ads and measuring impressions, and Hulu internally prioritized getting ad-free viewing out the door because of market demand for the feature, said a person familiar with the company’s decision-making.

The streaming service is still exploring how to bring downloadable content to ad-supported subscribers but, the spokesperson said, it’s not clear when such a feature will be available or what form it will take.

Hulu isn’t the only streaming service that has taken this approach. CBS All Access, which offers ad-supported tier for $5.99 a month and an ad-free tier at $9.99 a month, rolled out its Download and Play feature in 2018, allowing viewers to download content and watch it later offline, but that option is only available to ad-free customers. At the time, CBS said there were no plans to extend the download feature to subscribers to its ad-supported tier.

Netflix, Showtime, Starz and Amazon also allow subscribers to download programs to their devices, though none of those services is ad-supported.