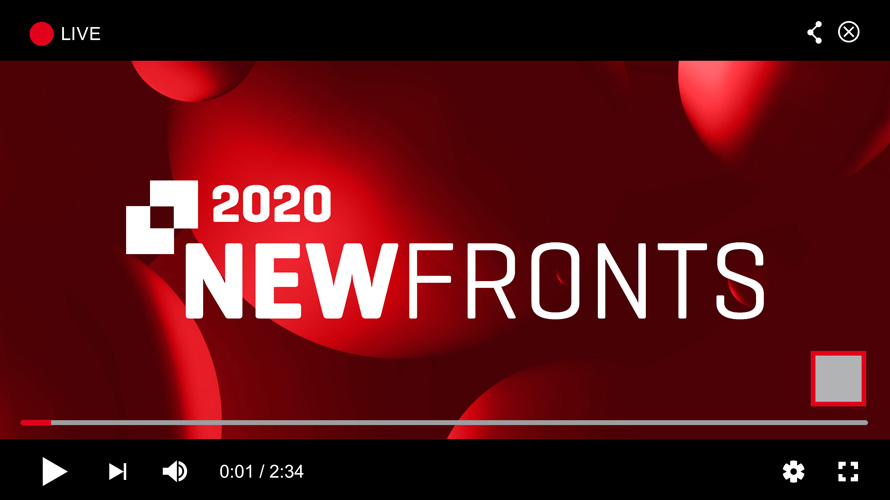 This year's NewFronts presenters can choose to livestream their events, with or without a live audience. - Credit by IAB, Getty Images

As fears over the coronavirus outbreak continue to affect events and conferences in and out of the U.S., the Interactive Advertising Bureau is preparing for a virtual NewFronts season.

Events and company presenters for this year’s Digital Content NewFronts—slated to take place April 27-May 6 in New York— will now have the ability to stream their presentations, part of a plan that the IAB says will increase “flexibility” for presenters and attendees alike.

The new option will enable participating publishers to either produce fully streamed presentations without a live audience, or create a show that would have an audience and also be streamed for remote viewers. Company presenters will still be allowed to hold live standalone shows without a streamed component, which has been the norm since the NewFronts were first held eight years ago.

“Based on feedback from longtime NewFronts participants, we at IAB strongly recommend streaming-only productions for all presenters,” the IAB said in a blog post about the changes. “However, we are committed to supporting the industry and believe that the new streaming option we’re outlining here allows for the most flexibility to serve your specific requirements.”

Presenters will have the option to livestream their NewFronts presentation or produce it in advance and then stream it during their designated time slot. They’ll also be able to upload complementary programming to their formal onstage or virtual presentations. The audience for the programming will be restricted to qualified virtual “attendees” and will be available on demand after presentations are held, the IAB said.

As part of the new feature, the IAB is constructing a facility to produce NewFronts programming, but presenters can also create their shows elsewhere. Companies participating in the NewFronts will be able to host streamed events on their own web domains.

Update: Shortly after the IAB’s announcement, YouTube said that its Brandcast NewFront event will shift to digital-only.

The IAB says the video streaming options will be available in future years to increase the audience of media buyers and planners who may be interested in purchasing ad inventory from participating companies.

“By adding a streaming option to the NewFronts, we’ll transform the NewFronts and upfronts into the 21st century media and brand marketplace they were meant to be—a benefit that will last long after COVID-19 is relegated to the history books,” the IAB said.

The rollout of the video streaming features comes as the television industry’s busiest season has already been disrupted by the novel coronavirus, which causes the respiratory illness COVID-19. Both AMC Networks and A+E Networks canceled their live upfront presentations on Monday, which had been scheduled for later this month in New York.

Fox News Media and Comcast’s FreeWheel had previously canceled their plans to host live upfront events. CNN forged ahead with its own upfront event on the evening of March 5, and has since become the only television property to have hosted an upfront event this month. There are no other upfront events on the schedule ahead of the NewFronts presentations, which begin April 27.

Events all over the country, including the annual South by Southwest festival in Austin, Texas, have been canceled over mounting fears about the transmission of the virus. Many major companies have restricted travel for its employees, further intensifying the ripple effects of the virus.

The spread of the virus has already had major effects on the global advertising industry, although the consensus among those in the TV industry is that television ad spend will remain unchanged or even increase as more people stay at home.

Amid a spate of cancellations last week, the IAB underscored its commitment to the event and said it was not planning any changes to the NewFronts agenda.

“NewFronts is a domestic U.S. event, and there are no government domestic travel advisories, thus at this time we are not planning any changes to the NewFronts agenda,” the organization said in a statement last Thursday. “The safety of our members and community is of utmost importance, and we are monitoring the situation with coronavirus (COVID-19) closely.”

The NewFronts, which were created as digital media’s answer to traditional broadcast media’s upfronts, are slated to begin April 27 and run for a week and a half in New York featuring presentations from streaming companies like Amazon, Hulu, YouTube, Vudu and Roku. The event, which is slated to wrap May 6, will also include two days of streaming-related presentations and sessions dedicated to topics like streaming audio and influencer marketing.

As the events get closer, Adweek will continuously update its upfronts and NewFronts calendar with the most current information about scheduling and any event cancellations.